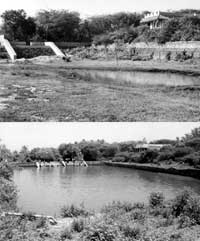 symbols of religious fervour, pride of the erstwhile princely state of Travancore and lifeline of Kanyakumari district in Tamil Nadu, the sacred water tanks have, in the past three decades, been disappearing into oblivion. Once serving as popular bathing sites for the local crowd which flocked there during festivals, the ponds have been victims of abuse and neglect to the extent that till recently most people nearby were unaware of their existence. Today the story has taken a new twist as more than 20 of them have surfaced again with the user groups pooling in their efforts and earnings to replenish the parched reservoirs.

Abandoned or partially used, these tanks now have either been fully restored or are in the final stages of renovation following the initiative taken by District Rural Development Agency (drda) and a participative programme by the Tamil Nadu government called ' Namakku Name' (For Us On Our Own). Under the programme, interested communities, organisations or individuals are allowed to undertake the restoration project with the state government financing 75 per cent of the total cost and the locals bearing the remaining 25 per cent. So far 24 ponds costing a total of Rs 75 lakhs have either come alive or are in the final process of revival.

It all started with the restoration of Kanyakumari Devi temple water tank. The huge pond with beautiful granite lining used to be filled from the Pechiparai irrigation system till the days of the Travancore kings. The practice was slowly done away with so that the feeder canal disappeared without a trace and the site remained hidden from public view for over 30 years. Worse, the much venerated tank became a dumping ground for waste. At another level acute water scarcity plagued the temple town.

It was an environmentalist who, after making a tv programme on water problems of Kanyakumari, first mooted the plan to revive the tanks. A local ngo Vivekananda Kendra and the then collector of Kanyakumari, S Pandian along with P Selvarajan, project officer, drda, agreed to take up the plan under the ' Namakku Name ' scheme. The lost feeder canals were traced back with old maps, encroachers politely tackled and the tank filled to the jubilation of the community. The local Lions Club, Rotary Club, Hotel Owner's Association and state government officials gave full support to the project, costing a total of Rs 10 lakhs, part of which was borne by the local people. Centre for Ecosystems and Development Management (cedm), the Nagercoil-based ngo whose secretary initiated the present plan and other ngos and environmentalists played crucial roles.

"I am only doing my job" was all that Selvarajan, who has also done well in poverty eradication in the district, was willing to say. 'Chakra Kulam' another tank nearby, with a legend that it was dug by the ' Chakra ' (wheels) of Hindu god Lord Vishnu, was taken up next at a cost of Rs 800,000. Soon after a series of tanks followed, some of them renovated by the people with minimum financial burden. The people contributed in terms of labour and procured an additional income by selling the silted mud. Ponds in Kanyakumari are used not only for bathing and irrigation but also for fishing and growing lotus flower.

Kanyakumari, though contiguous to Kerala with its high rates of rainfall, is a rain shadow region with the Western Ghats mountain chain coming in between. But unlike the adjoining districts, Kanyakumari gets water all the year round from the Pechiparai Dam high in the hills, a hundred-year-old canal system which is the district's lifeline. Many of the ponds are system tanks fed by the dam waters and help maintain the plains to be fertile. Tanks are thus central to life in the predominantly agrarian population -- a wonderful instance of ancient wisdom in watershed management. What is once again being realised is that wherever tanks were renovated the ground water levels showed marked changes. Lodges adjoining Kanyakumari temple tank started getting water soon after it was filled.

The over exploitation by bore wells nearby, however, is putting pressure on the tanks which get dry after a period of time -- a problem difficult to solve due to various socio-political reasons. Nevertheless, it seems people in Kanyakumari district are becoming wiser by re-inventing their legacy of tanks.