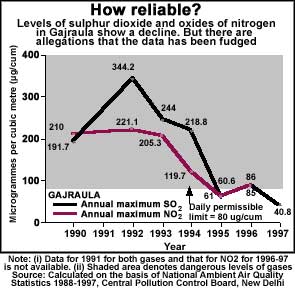 There is no evidence more conclusive about the state of air pollution in Gajraula, a sleepy industrial town in Uttar Pradesh, than the air itself. As one enters the town, breathing becomes difficult. "The residents of the town have got used to the air quality. But visitors generally have difficulty in breathing," says an engineer who works in one of the polluting industrial units. cpcb data for 1997 show both the maximum and average levels of spm way above the prescribed limit.

Gajraula was declared an industrial town in 1981-82. Within a few years, a number of industrial units - mainly chemical and pharmaceutical factories - sprung up. "After the setting up of these units, air pollution has increased at an alarming rate. We do not know what the pollution control board officials are doing. I am sure that these officials are fudging the data, because if an independent study is conducted, the figures would be higher," says Jitendra M Shukla, president, Nagrik Suraksha Samithi, a local organisation campaigning against industrial pollution.

A visit to the office of the Uttar Pradesh Pollution Control Board (uppcb) in Moradabad can be quite revealing. Although admitting that industrial units are polluting the air, the regional officer, R C Chowdary, says pollution is only to be expected in an industrial town. "The industrial units have installed pollution control equipment," he justifies. "We have all the requisite pollution control equipment," says Ajay Jain of J K Drugs and Pharmaceuticals Ltd. Then why is the air polluted? "Poor enforcement," explains Shukla. Repeated visits by the Down To Earth reporter to the uppcb monitoring station in the town proved futile as there was nobody at the office. cpcb officials in Delhi reveal that of the 20 large- and medium-scale industrial units in Gajraula, nine are classified as polluting.

Cultivable land has undergone a change after the setting up of the industrial units. Mango, that was extens ively cultivated here, has now been replaced by sugarcane and rice. "My mango trees were affected by air pollution from industrial units," says Tirath Ram, whose fields lie just outside the town, and who has now given up growing mango trees. Surely, if scientific studies are conducted on the state of air pollution in Gajraula, the results will be alarming. Till then, the town continues to suffer in silence.