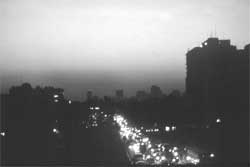 Powerful lobbies with vested interests often make interesting games, though often at the cost of public health. The way in which the moves to scuttle the Supreme Court (sc) orders have unfolded gradually at different levels is amazing. And with the sc standing firm, the disinformation campaign of these vested interests, having reached a feverish pitch, betrays a feeling of almost desperation. Trying their best to project a bogey of chaos out of their own imagination more and more, they have jumped on to the bandwagon of the saboteurs. How does public health matter to them anyway?

First there was the bogey of global warming. Next was, if no country in the world has so many cng buses, why should we? How does it matter that Delhi has the worst air pollution levels in the world and it citizens spend about Rs 1,000 crore every year on health costs? The political leadership was never known for its eagerness to implement clean technologies. Followed the grave warning about cng vehicles emitting more ultrafine particles. Then came the revelation that a Euro II diesel bus fitted with a particulate trap and running on ulsd is much better than cng . This moved on to the claim that particulate traps can operate even on the diesel available in Delhi. mpng also got enlightened that all countries are using 500 ppm sulphur diesel, so why not ask the sc to declare it as a clean fuel? By a different stroke of strategy, the detractors doled out 'studies' showing that moving on to cng is not only going to produce chaos, even the air quality is going to worsen and that it has already started showing signs of deterioration. Different players joined in at different levels of these claims.

And they have their reasons. Implementation of the cng order would restrict the money that some earn on the sly, some would stand to lose their business if diesel is accepted as a dirty fuel on principle, some have their corporate bosses to please and others, especially in the government, who love to procrastinate.

The only hope for public health on the face of a sustained effort to sabotage the move to cng has been the firm stand taken by the Supreme Court, which has refused to give into their pressure tactics. "No diesel, no diesel, no diesel," and "We stand by our earlier orders," have been among the oft-heard phrases in court. The future of the effort to clean up the capital's air will be decided by the sc when it hears the case during the last week of September. Keep watching!