Gandhian to the core

Gandhian to the core 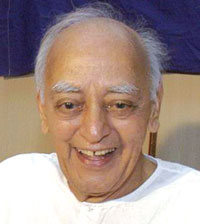 ABOUT 15 years ago, I read in a newspaper how handloom weavers of Varanasi were mortgaging their daughters to moneylenders because of poor income. The government supported mill cloth at the time. When I discussed the matter with Lakshmi, he had tears in his eyes. Tears because he had spent much of his life trying to support artisans, but the government failed to recognise his efforts.

Lakshmi was instrumental in turning the khadi and cottage industries into a national showcase. During a meeting in Uttarakhand Lakshmi’s wife Devaki Jain and I met women who knitted but their products faced tough competition in the market from mill-generated cloth. Seeing their plight, Lakshmi set up Mahila Haat. It has been running since in Delhi.

Lakshmi became the first chairperson of the National Council for Rural Institutes in Hyderabad in 1995. He called me and said, “Radha, here is the chance to do what Gandhiji envisaged for our villages. We need to take nayi taalim (the educational principle propounded by Mahatma Gandhi) forward.”

He was a Gandhian to the core. In fact, he helped build the new township of Faridabad near Delhi to rehabilitate refugees after Partition. Post Independence, the Magsaysay award-winner devoted himself to fighting corruption. My last meeting with him is etched in my mind.

He was resting in Mumbai after being diagnosed with cancer. I received a bulk of messages asking me to meet him. Thinking that a gravely ill person wants to see his loved ones one last time, I went. But I was wrong. Health was not on his mind.

Angry Kashmiri youths engaging in stone pelting were. He said, we need to bring Kashmiri artisans back to work so that they do not indulge in violence. “I have written a letter to Anjuman-Dastkar (a non-profit in Kashmir) already and you should also meet with the Khadi Commission and ensure that we all wear Kashmiri handloom this winter,” he added.