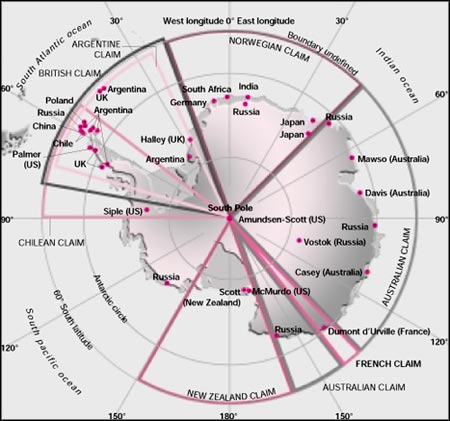 Is India's Antarctica science really an eye-wash -- more bureaucracy than science? One cannot, of course, deny the fact that India needs to keep that toehold. During the past three decades, Antarctica has moved towards the centre of the international stage due to a variety of reasons: its growing global environmental and scientific importance, its perceived resource potential, development of tourism and controversies regarding the most appropriate ways of managing its vast expanses. The continent has been discussed endlessly in the United Nations and in other international fora, attracted close personal attention of world leaders, and been the focus of interest of environmental groups and non-governmental organisations.

During the early 1900s, Antarctica was beset by acrimonious territorial claims and counter-claims. While a polar tradition was the basis of some claims (as in the case of Chile and Argentina), a heroic history of polar exploration formed the foundation of Britain's emotionally charged claims. Sovereignty became a serious source of conflict. The signing of the Antarctic Treaty, a remarkable instrument that has kept various disparate interests together over the years, put a lid over this veritable Pandora's Box by freezing individual legal positions: claims were, thus, neither renounced nor diminished, but merely set aside for the duration of the treaty. Both the US and the USSR, in a Cold War year, had signed the treaty, so ensuring that Antarctica remained out of the purview of hostilities by declaring it a 'zone of peace'.

Nations, however, continued to pursue their individual interests by using science. Traditionally, science was treated as a by-product of exploration or as a criterion for effective territorial occupation. Though the Antarctic Treaty pushed aside sovereignty concerns in the interests of international scientific cooperation, it reinforced the science-politics connection. For instance, it stipulated the performance of 'substantial research activity' as a precondition for future admissions to consultative party status. The level of scientific involvement, thus, became an exclusivist pointer to the territorial and policy clout of a nation.

The treaty's claims to 'govern' Antarctica have set it against a phalanx of non-treaty nations who espouse that the continent is the "common heritage" of humankind. As a delegate from Zaire, a non-treaty nation at the UN First Committee in 1990 put it, Antarctica was "outside the jurisdiction of one country or group of countries and any wish expressed by any country either for its annexation or its exclusive control by a group of countries is nothing but an outdated imperialism".

Indian involvement in Antarctica has to be viewed in the light of this history. As the second most populous country in the world, India believed that it did have a rightful place in the congress of nations that drove decisions in the region. Science happened, but almost incidentally.

Says Swayamprabha Das, a senior programme officer with WWF-India, who has a PhD on impact of geopolitics on Antarctic environment, "What we really lack is a policy on Antarctica." Quite so. What we need, therefore, is a policy that gives Indian science its due place under the Antarctic sky. A policy that ensures that our annual Antarctic expeditions do not remain meaningless gestures. This is the only way our geopolitical ambitions in the region can be served.

The NCAER evaluation of the Antarctic programme proposes long-term research commitment by institutions and widening the base of participating institutions to encourage competitive research. It also puts forth a vital suggestion: critical assessment of the work done by Indian Antarctic researchers -- not done till date -- and exploring the possibilities of application of the research. A paper presented by Rasik Ravindra and M J Beg of the GSI at a national conference on Antarctica research in Chandigarh in February 2003, says that India also needs to "graduate to international collaborative scientific programmes". India does have a few collaborative research programmes (for example with South Africa), but these are low-profile and have disparate objectives. Providing Indian Antarctic research a clear, application-based direction: our science and its custodians have a tough task on hand -- perhaps much tougher than what they undertake in Antarctica's extremely prohibitive conditions. Will they prove equal to it?

Meet India's only scientist to have visited the South Pole