Changes in the weather patterns due to El Nio have resulted in a flood of natural disasters across the globe. Agriculture is the worst hit 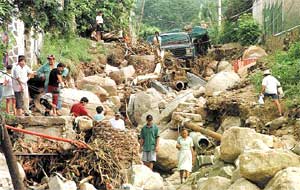 scientists have been struggling to come up with conclusive answers on the extent of damage El Nio would cause on the entire world. Since March 1997, they have been observing significant warming of sea-surface temperatures in the Pacific Ocean, off the coast of South America. The phenomenon usually peaks around late December and is often associated with important changes in temperatures and precipitation, which may positively or negatively affect agriculture and water resources. The change in sea surface temperatures also affect marine ecosystems.

El Nio has occurred twice in the last fifteen years. In 1982-83, El Nio caused severe flooding and extensive damage in Latin America and drought in parts of Asia. In 1991-92, the effects of El Nio led to a severe drought in Southern Africa. Scientists believe that this year's El Nio will be the most severe this century. Meteorological organisations around the world also indicate that this phenomenon will continue throughout 1997 and possibly extend into 1998. The worst effects of El Nio are expected to be felt over the next few months.

In recent months the fao's Global Information and Early Warning System has been closely monitoring weather anomalies and assessing the possible damage these may cause on crop production and the food supply. Researchers working at the fao have observed significant deviations in weather patterns in Asia which they say is a cause for concern.


Cambodia is witnessing serious weather anomalies affecting agriculture. Heavy rainfall and floods have affected the early rice crop in several parts, specifically in Kratie province in the east. The 1997-98 target for paddy production has been set at 3.6 million tonnes, slightly higher than estimated output of 3.39 million tonnes in 1996-97, from an area of 2.17 million hectares.

China experienced its worst drought in 20 years in July and August. This is seriously affecting crops, particularly in the provinces of Henan, Hebei, Shanxi, Hubei, Liaoning and Jilin in central and north eastern parts of the country. Officially, it is estimated that up to two-thirds of the country has been affected by prolonged dry spells. In the central and southwestern regions drought conditions continue to affect some 3.1 million hectares of crops along the upper and middle reaches of the Yangtze river. This may affect the autumn harvest. But unseasonal rains have improved conditions for planting winter wheat, normally sown from the second half of September, in central parts of the country.

The current drought in Indonesia is reported to be the worst in half a century. For the remainder of 1997 and into 1998, dry conditions are predicted to continue over southern Sumatra and Kalimantan, on the Island of Borneo, Java and eastern parts of the country. In these areas, although monsoon rainfall normally begins in September the first rains only came in November. The impact of this will be most noticeable in the second season of rice and maize in Java, the country's largest producing area. It will also affect soil moisture conditions for maize planting in November and December in eastern parts of Java and southern Sumatra. Insufficient rainfall and dry conditions may also affect the output of coffee in key growing areas of Lampung and Benkulu in south Sumatra, cocoa and rubber. Overall, official estimates indicate that the drought would affect some 300,000 hectares of rice.

Prevailing dry conditions have also exacerbated the forest fires which have affected agriculture and forest plantations and reduced water supplies. In August and September, there have been various reports of falling water reserves in wells and rivers in parts of Sumatra and Java.

In North Korea the prolonged drought has worsened. This is expected to have serious and far reaching repercussions on the country's already grave food supply situation in the year ahead, especially as its population has already been severely affected by a shortage of food over the last two years.

Although the 1997 season began favourably with rainfall appreciably above normal in May, subsequently precipitation fell sharply. Consequently, rainfall in the critical months of June, July and August fell to between 20 and 30 per cent of the long term average. Crops were also adversely affected by significantly above normal temperatures at critical stages of growth.

The food outlook for North Korea in 1998 is worse. Domestic production of cereals, even under the most optimistic scenario, will meet less than half the country's minimum food needs, whilst imports are likely to become increasingly strained due to growing economic difficulties. Further, as imports last year were highly dependent on barter trade with neighbouring provinces of Jilin and Liaonning in China, the fact that the drought this year has seriously affected crop production in these provinces too, may reduce surpluses and the volume of trade next year. This, therefore, may exacerbate food problems.

Malaysia, which suffered the haze from forest fires in Indonesia due to El Nio's induced wind patterns, has had below normal rainfall. But, coffee, cocoa and sugarcane crops are reported to be in a satisfactory condition so far. However, in areas affected by severe dry conditions, production is predicted to decline. The government had to declare a state of emergency in eastern Sarawak due to the haze emanating from forest fires in Indonesia.

In the Philippines, various parts of the country have been devastated by the worst drought in years. In northern parts of the country, rainfall has been below normal since May affecting major rice and maize growing areas. Elsewhere, large portions of the country, including eastern Luzon, Visayas and Mindanao, experienced little rainfall throughout August and the number of tropical storms across the country, which bring significant amounts of rainfall, has been fewer than normal.


In October this year, hurricane Pauline in Mexico tore apart houses, washed out roads and killed around 230 people. Again in November, another hurricane, Rick struck the southern coast of the country. Hurricane Rick did little damage, compared with the destruction caused by hurricane Pauline and no deaths were reported. In the Chiapas region, flooding of the coast in upland river valleys, has been saturated by three previous storms. The hurricane season in Mexico has been particularly intense, which some blame on El Nio.

In Papua New Guinea the government declared a state of emergency in response to a devastating drought, the most serious in over fifty years, allocating us $14 million in aid to 19 of the country's 20 provinces as concern over food shortages increases. In the coming months, there is going to be a shortage of water, both for agriculture and for human consumption. Large numbers of people living in the mountains , who rely on home gardens, are reported to be deserting villages in search for food as drought has resulted in widespread bushfires destroying homes, crops, grasslands and forests. Rivers and dams have also been severely depleted in highland areas, which have been the worst affected by a combination of four months of drought and serious frosts.

The areas most affected include Enga and southern and western highland provinces, where extensive damage to the sweet potato crop has left the communities with severely reduced food supplies and planting material. These regions are also the most vulnerable to food shortages as there are limited alternative foods available and no cash crops to generate income. In addition to these areas, communities in the upper Fly River, especially those around Kjunga, are experiencing difficulties in meeting food needs as the main river supply line is no longer functioning due to the drought and seriously reduced water levels.

Although there is a possibility of some rainfall later in the year, overall serious drought conditions are likely to continue till December or January 1998 and possibly March. The food supply and water situation, therefore, is likely to deteriorate significantly. So far official reports indicate that between 700,000 to one million people have been affected by extreme weather conditions and face food shortages. Unconfirmed reports indicate that the country's 1997 coffee crop, a key export item, will be reduced by up to 50 per cent by the drought, while damage to cocoa and palm oil is also expected.

In Australia, a severe drought threatens the livelihood of thousands of farmers. According to the wmo , the region has been very dry since June, with large-scale wildfires and drought. many areas have already experienced rainfall deficits of 400-500 mm (16-20 inches) in the last several months.

Due to the shortage in rainfall, thousands of cattle have starved to death. In many areas farmers are abandoning their farms and are coming to the cities in search of employment.

Africa is also facing the wrath of El Nio. The southern part of west Africa received abnormally low rainfall since July. wmo says that the region also received an extended period of suppressed rainfall during the 1982-83 El Nio. The onset of the rainy season has not begun for most of southern Africa.

As of the first part of November, eastern Africa experienced abnormally intense rainfall along the coast, and generally higher than normal precipitation.