Climatologists say recent heat waves in India are early signs of global warming due to the greenhouse effect. If so, it will only get worse 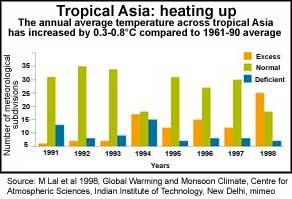 "(The heat waves) are initial signals of global warming," says M Lal, chief scientific officer at the Centre for Atmospheric Studies at the Indian Institute of Technology, New Delhi. In future, the scenario could get worse, warns Lal. "One of the most easily imagined impacts of global warming is an increase in the number and severity of heat waves," observes the World Resources 1998-99 , published by the World Resources Institute.

Qazi K Ahmed, an economist and chairperson of the Bangladesh Unnayan Parishad, a Dhaka-based non-governmental organisation, agrees. He and a colleague, Ahsan U Ahmed, presented a paper entitled Social Sustainability, Indicators and Climate Change at the Inter-governmental Panel on Climate Change's ( ipcc 's) meeting of experts in Colombo on April 27-29, 1998. "Although the climate change phenomenon is an extremely complex process, available evidence clearly suggests that global warming cannot but be an important reason (behind the heat wave)," he observes.

In his paper, which is still under revision, Ahmed anticipates that an increased frequency or severity of heat waves would cause an increase in human mortality and illness (see box: More death and disease ). General circulation modelling reveals that in a scenario where carbon dioxide concentrations are doubled, the number of heat related deaths would increase several fold in North America, North Africa and East Asia, Ahmed's paper points out. Increased frequency of other extreme weather events such as floods, hurricanes and storm surges would also result in increased deaths, physical injury, infectious diseases and psychological disorders, especially in disaster-prone countries.

"There is no period we can recognise in the last 1,200 years that was as warm (as 1998) on a global basis," wrote Jonathan Overpeck, a palaeontologist with noaa , in The Washington Post on December 8, 1998. "That makes what we are now seeing more unusual, and more difficult to explain without turning to a 'greenhouse gas' mechanism."


The second scientific assessment report of ipcc has projected an increase in global mean annual temperature of 1.0-3.5C by the year 2100 (relative to 1990). In a paper entitled Impact of Climate Change in India , Lal points out that the mean surface air temperature in India has increased by about 0.4C over the past century. Increasing trends in annual mean surface air temperatures have been noted during three epochs: 1905-1925; 1932-1956; and 1972 onwards. The warming is more pronounced in post-monsoon and winter seasons.

The rise in annual mean temperature over the Indian subcontinent due to increase in ghg s is likely to be about 2.7 C and 3.8 C by the decades 2050s and 2080s respectively, points out Lal's study, which is based on four of the seven state-of-the-art atmosphere-ocean general circulation models. On seasonal basis, the projected surface warming in India is more in winter than in summer, and the warming would be less pronounced during the monsoon. "The winter season is shrinking, and as a result the heat is coming early," says Lal. Moreover, projected warming of the land region of the subcontinent is likely to be relatively lower than that of the adjoining ocean, resulting in a decline in the land-sea temperature difference. It is this difference in temperature that brings the moisture-carrying winds of the summer monsoon into the subcontinent.


"In India, the impacts of the monsoon are truly all pervading. The importance of forests, ecosystems and vegetation needs no emphasis and these systems are highly dependent on monsoon rains," writes Lal. In the past 100 years, the southwest monsoon has shown definite changes in the period 1961-1990 in comparison with either 1901-1930 or 1931-1960, though no consistent, long-term trend is detectable.

According to Lal, climate models suggest that both winter and summer rainfall will decline in the Indian subcontinent.

As about 70 per cent of the annual rainfall over the subcontinent occurs during the monsoon season, perhaps the decline in summer rainfall here could have serious implications, Lal notes.

There is another aspect to the monsoon-global warming relationship. Lal mentions in his paper that in the past eight years, more meteorological subdivisions have recorded excess total monsoon rainfall. The intensity of extreme rainfall events is projected to be higher, thereby suggesting the possibility of more frequent flash floods in parts of India and Bangladesh, Lal writes. The yearly variations in monsoon rainfall over India are large enough to cause devastating floods or serious drought, he says (see graph: More floods in India ). Says Q K Ahmed: "Bangladesh saw unprecedented floods in 1998 and a long rainless period in 1999 with high temperatures. Indeed, other parts of the world are also experiencing extreme weather events. I think there is no doubt that climate change caused by global warming is an important underlying factor behind these events."

But Indian meteorologists refuse to see these signs of change, pointing out that all the seven global climate models give different results when it comes to forecasting. They say one should take climate models as guiding factors but should not go for final decisions on the basis of these models. But they have no answers to offer.


One thing is clear: the scientific community is yet to come to grips with the weather phenomena behind the heat wave, and a serious and sincere research effort is needed. While imd keeps dismissing the heat wave as 'temporary', climatologists say it is a precursor of harder -- read warmer -- times to come.

If the heat wave is indeed linked to global warming, then it is time to sound the alarm bells, to devise strategies to adapt to the changes. Moreover, it is time for a public awakening about the issue in order to pressurise the government to become more active and vocal while negotiating international environmental agreements like the Framework Convention on Climate Change. There are hundreds of lives to save this year.