Going back to the past for a better future

The Tarun Bharat Sangh is helping drought-hit villagers of Alwar district of Rajasthan grow crops by reviving a traditional system of dam construction.

Going back to the past for a better future 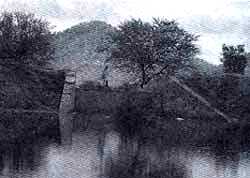 "WE ARE happy without government help for our agriculture. Our lands now yield thrice what they used to four years ago," says 36-year-old Jagdish Gujjar of Guwara Dewari, a village of 60 households in the green belt of the Sariska reserved forest in Rajasthan's semi-arid Alwar district.

Agriculture in the region, which is carried out on strips of land between the Aravalli hills, was till recently a traumatic endeavour due to water scarcity. But life is much easier now, with the farmers of the area having taken up systematic water management. "Many of the villages have regained their long-lost prosperity," says 51-year-old Nanakram Gujjar, a development worker at Haripura village (see box).

Water has traditionally been the most scarce, and therefore the most precious, commodity in the region. Alwar district receives totally 60 cm rain in a year, but this rain is unevenly distributed and, as a result, of little use. "For weeks, there would be no rain and then, suddenly, a heavy downpour lasting two days. Such rains don't help us at all," says Sumer Singh Gujjar, primary school headmaster in Suratgarh and president of its gram sabha (village assembly).

Only 30 per cent of the total land in Alwar is farmed, the rest is hills, forests and samalatdeh (pasture land). Of the arable land, only 9 per cent is irrigated. The monsoons, which are the only source of water, have failed with predictable regularity to meet the farmers' expectations. "The district experienced severe droughts in 1985 and 1986. Women had to trudge more than 2 km every day to collect rationed water from wells. The people became severely malnourished. Animals died in large numbers," recalls Rajendra Singh, secretary of the Tarun Bharat Sangh (TBS), a non-government organisation, working for the integrated development of the area.

Singh explained, "Traditionally, the people of this region built remarkable water harvesting structures called johads (check dams) to store rain water for use in a drought year. However, with modernisation and the erosion of community participation, the system faded out." As a result, the rural economy, based on agriculture and animal husbandry, was practically wiped out.

Nanakram says, "People began selling fuelwood collected from nearby forests, which added to the balding of the Aravalli hills initiated by forest department contractors." Those who had assets to mortgage migrated to towns in Punjab and Haryana.

Rajendra Singh recalls, "We were told lack of water was primarily responsible for the miserable conditions. People told us that several decades ago, each village had had two small johads. But once the johads were destroyed by flash floods or silted up, no one rebuilt them."

When TBS stepped in with its integrated development package, the people were initially suspicious. The activists proposed building more johads. "Our suggestion was met with very little enthusiasm," recalls TBS activist Laxman Singh. "But still, with the help of some families, we built three, 4.5-m-long earthen water harvesting structures without any external engineering help."

The rest of the village realised the importance of the johads when rainwater run-off was arrested and the improved ground water infiltration led to recharging of dry water wells. Plugging of the nalas led to the prevention of precious top-soil erosion.

But building water-harvesting structures was not TBS' primary objective. Rajendra Singh says, "We aim to make the villages self-reliant and the only way to do that is to organise the villagers to help themselves. Constructing a johad and maintaining it is just one example of what the community can do for its prosperity if it gets together."

Since 1986, 200 johads have been constructed in 100 villages of the Thanagazi, Rajgarh (Alwar district) and Bhanavas (Sawai Madhopur district) panchayat samitis. Johads are often used as an instrument to unite a village. Rajendra Singh explains, "We first help villages form gram sabhas. The sabhas select the sites, catchment areas and decide on the budget for the johads. Afterwards, depending on the economic strength of the villages, they are asked to contribute 25 per cent, 33 per cent or 50 per cent of the budget, while TBS puts in the rest."

TBS, however, soon ran into trouble with the irrigation department. Rajendra Singh says, "The department, which had done nothing to help the residents of Gopalpura, declared the structures we built illegal under the Rajasthan Irrigation Water Supply Act, 1954, and in March 1987, a notice was served on us (TBS and the villagers) to dismantle the structures as all drains were government property."

When the villagers argued they had the right to manage their water resources, "the department changed its strategy and branded our johads as technically unsafe," says Dhritpal Meena, a marginal farmer in Gopalpura. "But this charge was disproved during a heavy downpour in 1988, when our earthen structures -- costing Rs 35,000 each -- remained firm, while the government-built dam at Jaitpura -- built at a cost of more than Rs 1 lakh -- was washed away," says Ramachandra Meena, another Gopalpura farmer.

The johads have also run into intra-village disputes, which then had to be sorted out by the gram sabhas. "In 40 per cent of the cases, the dispute was over selection of sites," says Aman Singh, another TBS activist, adding, "in Suratgarh, the technically most viable dam-site happened to be on a brahmin's land, but the Regar-dominated village forced the gram sabha to change the decision in their favour."

Sumer Singh says, "With this in mind, the representatives of 11 gram sabhas and the local members of the legislative assembly and Parliament met on December 24, 1992, and set up a panel to resolve such cases."

Distribution of water is also a source of tension. "Often, those with land close to the johads use more than their share of water. But the gram sabhas and TBS have now arranged for farmers needing more water to get it provided they pay extra. This is after all have got their essential requirement. The system is monitored by the gram sabha. The money collected goes to the village fund for the welfare of the landless," says Nanakram Gujjar.

Today, the villagers have raised good crops of wheat, maize, bajra, gram and mustard. Badri Prasad Meena of Gopalpura, who has 0.8 ha of land, says that in the five years since the johads were built he has been able to purchase a new camel cart and construct a pukka (concrete) house.

The emigration of the poor also seems to have been arrested. "Now it is the rich moneylenders' turn to migrate to big towns as villagers no longer need to mortgage their belongings for a pittance," remarks Sumer Singh.

For ecological regeneration, TBS supplies gram sabhas saplings for planting on denuded hills, pasture land, field boundaries and johads. Four years ago, 8,000 saplings of local species were planted on 25 ha of banjar charagah (barren land) in Gopalpura, and now the village has a green corridor. "To keep grazing animals out, walls have been raised in more than 100 villages and the gram sabhas ensure social fencings. Those caught felling trees are fined Rs 11," says Nanakram.


In Bhawanta, women have a separate assembly. Says Muli Devi, a member, "We formed a separate sabha to deal with women violators of gram sabha rules." But every village doesn't have a separate women's association. This practice has been initiated only in relatively more backward villages, where the purdah system is very deep-rooted.

Women's participation is a goal that all activists and enlightened villagers are striving for and much has been achieved. "We seek to strengthen gram sabhas by increasing the participation of women," underlines Sumer Singh. But given the social attitudes towards women in the region, a lot more needs to be done. For instance, most girls drop out from school after the fifth standard.

Although TBS professes its primary aim is to help villagers get organised, a glaring flaw in its approach is the emphasis on construction of johads instead of on forming strong gram sabhas. Often, it appears the villagers and even TBS see johads as an end rather than as a means to an end. Education of women, health and social problems such as bride-price and child marriage need more attention. As long as these areas are neglected, self-reliance will remain a distant dream.