A little known community monitoring scheme could prove handy for the new government, which is readying to revamp the country's healthcare system 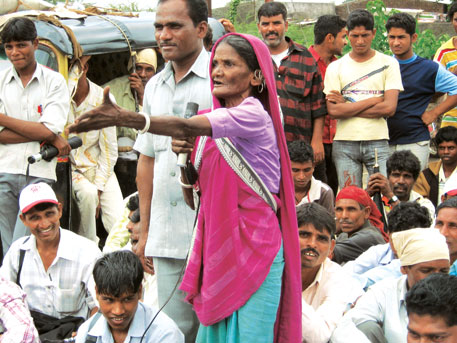 The primary health centre (PHC) at Ajara block in Maharashtra’s Kolhapur district would handle just eight childbirth cases a year till 2011. Today, it handles over 125 such cases in a year. The health centre became efficient because of a Central government scheme that empowers communities to monitor public health services. In 2010, the residents participated in a jan sunwai (public hearing) session, in which they told senior health department officials the problems they faced at the health centre. As a result, the doctor-in-charge of the PHC was transferred. Today, three private clinics in the village have shut down as patients prefer the revamped PHC.

The successful jan sunwai initiative is part of the community-based monitoring (CBM) scheme that the Centre launched in 2007 under the National Rural Health Mission (NRHM) to increase accountability in rural healthcare. People are invited to these hearings to report their experience of health services in the presence of health officials and panelists from various fields. CBM in Maharashtra is organised at multiple levels, from the village to the state. Health officials, panchayat representatives, civil society organisations and active community members form monitoring and planning committees at each level.

Since 2008, as part of CBM, over 450 public hearings have been organised in Maharashtra, which was one of the nine states selected for the pilot phase in 2007. By mid-2014, the process was being implemented in 125 primary health centres, covering 860 villages. Twenty-six civil society organisations have been collaboratively involved in CBM processes across these districts, says a paper titled “Reclaiming public health through community-based monitoring” published in September 2014 by non-profit SATHI, which is coordinating the CBM scheme in Maharashtra.

Prior to the CBM move, the public health system was dependent mainly on two forms of information and evidence—the internal health management information system and periodic assessments done by external professional agencies. Now, a state nodal organisation coordinates CBM activities across districts (SATHI in the case of Maharashtra), in collaboration with district and block nodal organisations working in their respective areas, as well as the state’s health department.

An evaluation by Maharashtra’s State Health Resource Centre (SHRC), an autonomous organisation which provides technical capacity to state government, in 2013 revealed that CBM has increased the responsiveness of the health system.

The report rated 75 per cent of primary health centres in the state as “good” after phase four of CBM (2010-11). The figure was just 44 per cent in phase one (2007-08). The scheme is also helping communities to put pressure on officials to reopen closed PHCs, and has improved the overall behaviour of healthcare staff.

Chhattisgarh is another state where the CBM initiative has been successful to an extent. In the state, local women health workers or mitaninsare responsible for implementing the scheme. According to Sulakshna Nandi, who recently wrote a paper on mitaninsin European journal Health Policy and Planning, they are engaged in community monitoring in all districts of the state. Though no thorough study has been undertaken on the impact in Chhattisgarh, one example illustrates how CBM helps keep a check on the data collected and maintained by health organisations.

In 2012, the National Vector Borne Disease Control Programme (NVBDCP) reported 90 deaths in Chhattisgarh due to malaria, which was based on state government data. This was far lower than the actual figure. The data collected by just 25 per cent of the mitanins under CBM suggested 2,467 deaths because of malaria in the state that year.

Unlike Maharashtra and Chhattisgarh, the performance of seven other states—Jharkhand, Rajasthan, Assam, Tamil Nadu, Karnataka, Madhya Pradesh and Odisha—has been far from satisfactory.

The scheme was doing well in these states till March 2009, when the Centre was running the pilot project.

The problem started when the Centre asked state governments to continue the initiative and said that they would get funds under NRHM. “Why will state officials want to monitor their own performance? Since they cannot reject the proposal directly, they have found ways to dilute the impact of CBM,” says a health expert, who was associated with the initiative in Tamil Nadu.

As a result, the state government has been irregular in releasing the funds to agencies that are implementing the scheme. “This creates anxiety among ground players and forces them to do unnecessary work to follow up the release of funds,” the Maharashtra SHSRC evaluation report highlights.

Abhay Shukla from SATHI says, “Funds have not been released for the past five months and community players are paying from their pockets. This is not sustainable.”

Narendra Gupta, whose organisation Prayas was roped in to implement CBM in Rajasthan, believes that the government lacks commitment. Rajasthan’s project virtually came to a standstill in 2010 when corruption charges were levelled against Prayas. “If the government was serious, it should have given the responsibility of monitoring the initiative to somebody else,” says Gupta. “But the government agencies realised the charges against us were false. So they sent our name to the Centre in 2012. The Centre has approved the plan. But the state is yet to release funds,” he adds.

Something similar happened in Madhya Pradesh, where the state has stopped supporting the scheme. “For eight months after the pilot project got over, a few individuals continued monitoring the health services on their own. They stopped after they received no support from the state government,” says Ajay Lal of the Centre for Health and Social Justice, an advocacy group for public health works in Madhya Pradesh.

In Odisha, the community involvement aspect of the scheme has been dropped. Gouranga Mahapatra, who is a member of the State Advisory Group on Community Action in Odisha that implements CBM, says: “After completion of the first phase in 2009, the CBM process was limited to state-level meetings with little community partizipation.” So the outreach of the scheme has not been expanded since 2009, he points out.

While it is true that the initiative has fizzled out in most states, there is no denying that it has potential. At its peak, the scheme covered more than 1,600 villages and 300 public health facilities in nine states. The Centre has announced plans to replace the National Health Mission with the new National Health Assurance Mission. This, say experts, is a good time to revive CBM. “The new government’s emphasis on good governance and community monitoring could be a way to monitor health services,” believes Shukla.