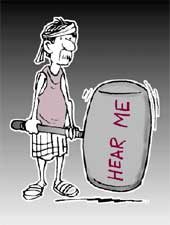 W hen you cry, in fact cry hoarse, and yet not be heard, what do you do? Experts contend that going to courts should be the last straw. "Firstly, there is a kind of misplaced loyalty towards the formal justice delivery mechanism as the be-all-and-end-all," says Ramesh. Secondly, there is over-reliance on them. As a result, the higher judiciary is choked with cases, some of which are frivolous.

An alternative is to strengthen the public hearing of the projects at the formulation stage. This would also help the investor, who would be saved from the public project delays and cost overruns after the project has started. But this can happen only if the public hearing scrutiny of the project is effective and transparent. However, in its present state, the public hearing notification is a toothless device, says Rao (see box: Loopholes aplenty ). For them to be successful, comprehensive guidelines in consultation with all those who are involved in the process are needed. This is particularly important because in India, the pressure on the environment is very high and a development project will impact on the local environment and affect livelihoods. Protest is the only weapon people have to stall projects.

Unless there is an environmental governance system that allows people the ability to intervene in project siting, design and, most importantly, monitoring. But with the unholy alliance beween industry and officialdom persisting in this non-transparent system, public protest remains the only weapon in their hands.

The most important is recognising the right/ access to information, which ensures public approval and also imposes a sense of environmental accountability on the companies concerned. Secondly, there is a need to make eia more than just a "formality" and also weed out possible chances of corruption in the preparation of the report.


"Right to know" is critical in environmental matters. It is necessary for people's participation in decision-making and public approval, firstly because it is important they are made aware of the effects of the project on their social and economic well being and, secondly, to promote transparency in the decision-making process.

The right to information is a fundamental right, which is set in Article 19(1)(a) of the Constitution. Besides, in 1988, the Supreme Court in the Reliance Petrochemicals vs Indian Express SCC 592 held that the right to know is a basic right, which people at large have in order to be able to take part in participatory development in industrial life and democracy. The eia notification on public hearing is also a step forward towards this direction.

There is, however, a lack of awareness of these rights to begin with. "In any case, whose duty is to make people aware of the basic rights -- ngo s or the government?" asks Hari Babu of Equations, a Bangalore-based ngo . Even if they are brought under the purview of public hearing, there is no guarantee that the project promoters will provide details of the proposed project to the public. An example is the bmic case, where the proponents refused to divulge anything apart from the executive summary. Even the High Court ( hc) refused to make available relevant documents, says Ranjan Rao. At the same time, the Gujarat hc has passed an encouraging order. On March 2, 2000, the court laid down guidelines for public hearing, which includes access to all the relevant documents. "Unfortunately, the decision does not bind Karnataka and unless the sc or hc passes some such order we will not have access to the same," says Rao.

Karnataka is at present drafting a Right to Information Bill, which will be placed before th Cabinet for approval. It will be the fourth Indian state to have an exclusive legislation on Right to Information. A significant aspect of the bill is that information sought should be provided within 15 days, compared to 30 days as in the Central draft Bill. Another provision is that every public authority is expected to make a voluntary disclosure of information relating to cases affecting public interest.

The Karnataka draft Bill also provides for a penalty in the form of a fine of Rs 2,000 on any competent authority or official for refusing to disclose information sought or for providing false or inaccurate information. But whether the eia , a document of a private company, will come under the purview of the act remains to be seen.


eia is an exercise to evaluate the probable changes in the various socio-economic and biophysical characteristics of the environment, which may generally result from a proposed programme. But in India, says Hari Babu, "The assessment is usually manipulated in order to make sure the project gets a go ahead." That corruption is involved is obvious though proving it would be difficult, says Ranjan Rao. "At a training programme an mef official once said it is obvious why there is such a great demand to be in the iaa division of the ministry. It was because of the 'incentives' available there," he says.

A good case in point is the eia of the proposed Dandeli Mini Hydel ( dmh ) project downstream of Supa Dam on Kali river in Uttar Kannada district. Ernst & Young, an American consultancy company, was given the task of preparing the eia . However, instead of wasting manpower and money on conducting field studies, the company reproduced the eia of Tattihalla Augmentation Scheme ( tas ) prepared by Bangalore-based Catchment Studies and Environmental Management's ( icsem ) in 1999. The only "earnest" thing they have done is changed the name of the dam -- dmh in place of tas . But despite this being brought to the notice of kspcb , the public hearing was held on August 21, 2000 and the project cleared.


Despite all the discrepancies, environmentalists hail the system of public hearing as no doubt a very innovative one with far reaching consequences. "This is the only opportunity we get by law. Sadly, it is only limited to hearing grievances, it does not talk about redressal of problems," says Ramesh. At present, it is more of a formality. But guideline have to be drawn especially because, unlike in the past, development projects have become an every day feature, says Hari Babu.

So, the question is one of extent. The process has to give people an opportunity of following up on the action taken about their grievances. They ought to have a right to veto public hearings if they remain dissatisfied. The process has to be made accountable to the people, and not merely to the dm and the officials of the spcb . To this end, public hearing is just the beginning. To make industry really accountable to the people, they need to be involved in monitoring of the project, eia , and even in the follow up of industry's environmental performance.

"Environmental justice is something you have to seek, not just in the court of law. It is not about conflict resolution. It is about anticipating problems, consensus building, meeting the needs of everyone and learning to live with nature," says Ramesh. One way of ensuring this is through community monitoring bodies, he opines. Once the company concerned realises that there is no scope for survival unless it has the confidence of the people amid whom it has to reside, the company has no alternative. Partnership with the people becomes necessary for survival.

With inputs from Keya Acharya in Bangalore. For full text of the notifications, visit www.cseindia.org