Shifting of industries to Bawana will affect groundwater reserves 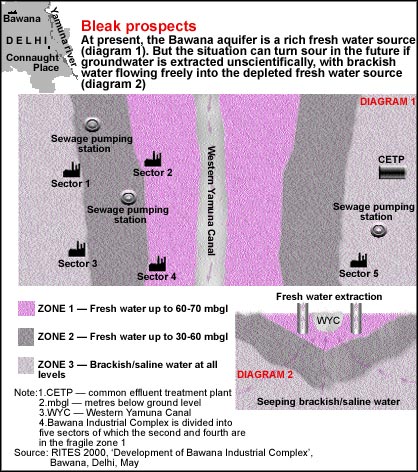 Bawana's bucolic settings have all but made way for Asia's largest industrial hub. The sea change that this northwest Delhi locality is undergoing may, however, leave the area's aquifer depleted and polluted. This is likely to have a ripple effect because Bawana is projected as a future groundwater source for the entire parched capital. Also, since Delhi slopes naturally from north to south, pollution in Bawana's aquifer will percolate down to those in the rest of the city.

The Bawana Industrial Complex (bic) will soon be the new address for 16,000 units being shifted from Delhi's non-conforming zones on the Supreme Court's (sc) orders. Even as officials of the Delhi government wax eloquent about the project, experts point out that bic is beset with environmental problems. Right from site selection to relocation of industries. "The issue has been thrust down our throats by politicians," says a Delhi-based planner.
"It is a low-lying area and recharge zone. Unlike most other parts of the capital, Bawana is a rich groundwater source," reveals K T Ravindran, head of the department of urban design, School of Planning and Architecture (spa). According to the Central Ground Water Authority (cgwa), Bawana's water table is shallow. This means that water can be struck between 1.5 metres below ground level (mbgl) and 4.5 mbgl. By contrast, the groundwater level in south Delhi is as low as 30 mbgl. Certain spots in Bawana that are in the vicinity of the western Yamuna canal have fresh water up to a depth of 60-70 mbgl -- another rare feature in the capital.

Further, the Central Ground Water Board's (cgwb) latest 'Report on groundwater extraction in Bawana Industrial Area' points out that "the soil in Bawana is alluvial and (conducive) for percolation of water". It would, therefore, facilitate the recharge of groundwater. What makes the region ecologically fragile is the fact that its unsaturated zone of soil (which acts as a natural filter for pollutants) is thin. Consequently, contaminants can easily seep into the aquifer making it vulnerable to groundwater pollution.

The Delhi State Industrial Development Corporation (dsidc) appears to have glossed over these facts as it turns Bawana into an industrial estate. A consortium of consultants -- Rail India Technical and Economic Services (rites), Tetra Tech India Limited (ttil), Architects' Bureau and Redecon -- is assisting dsidc in the venture. The exercise is being conducted in compliance with a 1996 directive of the sc on a petition filed by environmental activist M C Mehta.

The court ordered the shutting down of 92,000 units in residential and non-conforming localities, and their relocation in zones designated as industrial areas. Out of these, 16,000 relatively less polluting industries are being set up on a 778-hectare tract in Bawana. R K Gupta, chief engineer, dsidc, informs Down To Earth : "All the plots are to be handed over by the end of September 2002." But this optimism may be misplaced, considering that only about 800 plots have been allotted so far.

The authorities also seem to harbour their own notions about the impact of industrial activity on groundwater. "Who says Bawana is a recharge zone? Its water is brackish, not sweet. In fact, we plan to extract brackish water and recharge it with fresh rainwater," says Gupta. dsidc's consultants, too, feel they are taking necessary precautions to protect the environment. "I can assure you that relocation will not pollute Bawana, rather we will make it greener and better," asserts H L Chaudhary, additional general manager, rites.
In the light of several posers put forward by experts, however, the officials' claims do not hold water. For instance, eyebrows are being raised about bic's rapid environmental impact assessment (reia) carried out by New Delhi-based Consulting Engineering Services Limited (ces). " As the name suggests it was a rush job," alleges a senior cgwa official and adds: "The reia takes into account data for one season, as against a one-year period. Such huge industrial estates should be subjected to a complete eia and not an reia."

Then there's the 2001 report of New Delhi-based Indian National Trust for Art and Cultural Heritage (intach), which mentions that the "ad hoc" decision to acquire land in Bawana for industrial relocation was taken "under political compulsion". But project officials rebut these charges, maintaining that they have adhered to Union ministry of environment and forests (mef) guidelines. " reias are prescribed by the mef," says D Dasgupta of ces.

groundwater concerns: ttil pegs the demand for water in the industrial area at anywhere between 28 million litres per day (mld) and 34 mld. Initially, the entire requirement was to be met through groundwater extraction. But cgwb stipulated that this source should cater to only 25-30 per cent of the total water need. The plan has since been modified, reveals a ttil official. "The Delhi Jal Board (djb) has promised to supply 20.4 mld of water," says U Chugh, director of ttil. But djb sources deny this. "We have agreed to give only 3.7 mld," says Rakesh Kumar, junior engineer at djb's Bawana office.

Such inconsistencies have given rise to fears that water shortage may compel industries to sink their own tubewells. Environmentalists feel that unrestrained extraction of groundwater will disturb the region's ecology (see diagram: Bleak prospects). "Bawana has layers of fresh water and brackish water. In order to prevent the fresh water source from getting polluted, it is important to tap groundwater scientifically," avers Manu Bhatnagar, advisor, natural heritage division, intach. Meanwhile, rites claims to have got the nod from cgwa to dig 10 tubewells up to a depth of 40-60 mbgl, and two tubewells up to 90 mbgl. "We will also dig shallow wells," says Chaudhary. It is noteworthy that fresh water is found up to a depth of 60-70 mbgl at some places in Bawana. The 10 proposed tubewells would, in effect, be extracting fresh water for industrial use.

sewage treatment: "The bic is expected to generate about 30-32 mld of wastewater/sewage to be treated at the common effluent treatment plant (cetp) being set up by dsidc," says Chaudhary. The cetp will simultaneously treat wastewater from industries, residences as well as commercial establishments sited in bic. "How can the authorities think of mixing industrial, commercial and residential effluents, and then treating them together? Often toxic industrial effluents, when blended with other types of wastewater, form a concoction which a cetp cannot treat," says Ravindran. intach's report also recommends individual etps for the industrial units.

But officials feel that this is a non-issue. "Since less polluting industries are being shifted to the bic, effluents from these units will not be toxic. So there is no harm in mixing them," contends Chugh. Project managers also claim that effluents would be subjected to tertiary treatment, after which they would be used for horticulture and recharging groundwater.

monitors missing: Even as there is a semblance of planning for water usage and waste treatment, monitoring mechanisms are yet to be put in place. Such large-scale relocation would be justified only if the industrial estate does not pollute the environment even a decade after it commences operations, say experts. But this does not appear probable since the industrial plots in bic are freehold. "What is the guarantee that the present-day less-polluting industry will not sell off the plot to a polluting unit in the future?" asks Ravindran. dsidc is silent on this aspect, claiming that it does not fall under its jurisdiction.


Amid these unresolved issues, Bawana prepares for the industrial onslaught. "As so much of work has already been done, the project cannot be scrapped. But the authorities must ensure that the area is developed in consonance with sound environmental guidelines," says Ravindran. A cgwa official, too, offers advice: "A comprehensive study must be carried out and the project should not be rushed through under pressure."

There is unanimity among experts on the propagation of wastewater recycling and rainwater harvesting in Bawana. dsidc claims to be promoting the latter among individual units. "We have also chalked out plans to use treated cetp effluent for recharging groundwater," reveals Chaudhary. Emphasis is being laid on scientific extraction of groundwater and identification of other possible sources of water as well. intach's 2001 report recommends that "all individual units and other built premises should incorporate zero runoff techniques ... the entire runoff is to be recharged into the ground within the individual premises". But care should be taken to prevent seepage of contaminated wastewater, which could pollute groundwater.

The need of the hour is to map all possible environmental hazards in Bawana, so that this unique groundwater source is shielded from industrial exploitation. And Delhi has something to fall back on during a crisis.