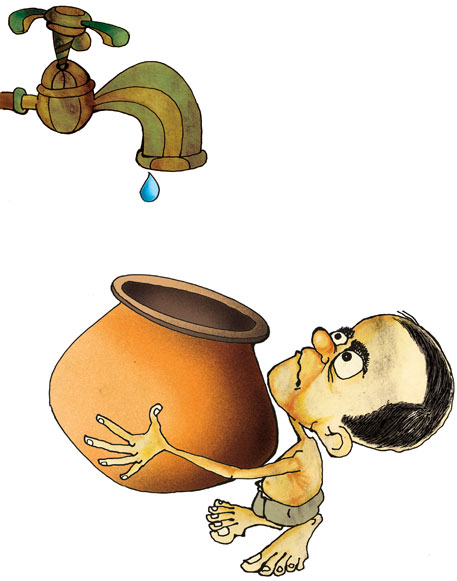 IS IT Prime Minister Narendra Modi's initiative to devolve power to states and allow them to design their development programmes according to their priorities, or to make irrelevant a ministry that was created under the regime of the previous United Progressive Alliance government?

This question is bewildering many after Finance Minister ArunJaitely, in his budget presentation, slashed the plan outlay of the Union Ministry of Panchayati Raj (MoPR) to a meagre Rs 94 crore from Rs 7,000 crore allocated last fiscal. The budget allocated to the ministry this time is even lesser than what it had received in the first budget in 2005-06. The Centre has also transferred one of the ministry’s flagship schemes—Backward Regions Grants Funds (BRGF)—to the state, and drastically reduced the funds of the other, called the Rajiv Gandhi Panchayat Sashaktikaran Abhiyan (RGPSA), to Rs 60 crore from Rs 1,006 crore allocated last year.

Both the schemes were designed to strengthen local governance when the ministry was conceived in 2004. While BRGF is being implemented in 272 backward districts of the country to fund development programmes through involvement of panchayati raj institutions, RGPSA aims to improve and strengthen their capacity.

Ministry sources and analysts say the schemes would fail and the ministry would become irrelevant without adequate funds.

Since panchayati raj is a state subject, it depends on the state how much power it wants to share with the local government. So the ministry advocates, persuades and incentivises states for devolution of power to the third tier of governance. “It is true that a lot of our work needs expertise and not money,” says S M Vijayanad, secretary, MoPR. “Without proper funds, it would be difficult to convince states for strengthening local governance or incentivise them for good practices,” Vijayanad admits.

The drastic reduction in funds for RGPSA has particularly made the situation problematic, a senior MoPR official told Down To Earth. A budget of Rs 60 crore is meagre to strengthen 250,000 village panchayats across the country, he adds.

The Centre says its decision, based on the recommendations of the 14th Finance Commission, will flush states with huge funds for empowering panchayati raj institutions. The Commission had suggested increasing states’ share in the net proceeds of the Union tax to 42 per cent from the current 32 per cent, and make the funds available to local bodies, both rural and urban.

The increment of 10 per cent will translate into Rs 2.87 lakh crore over the next five years, of which Rs 2 lakh crore will be directly transferred to village panchayats; the remaining Rs 87,000 crore will go to urban local bodies. The Finance Commissions had never recommended such a large amount of money to local bodies and had always suggested disbursing funds as ad-hoc grants (see ‘Devolution of fund’).

The devolution of such huge funds has increased the responsibility of the ministry. “We will now have to closely monitor the use of fund especially in states like Bihar and Uttar Pradesh where the panchayati system is weak. We need to interact with states to create panchayat level planning and would also push for dedicated panchayat cadre that will be our vision,” Vijayanand adds.

The devolution of funds, however, raises a pertinent question: are states willing to use the funds for empowering local governance?

Mani Shankar Aiyer, the country’s first panchayati raj minister, appreciates devolution of funds for panchayats but says the government has misinterpreted the 14th Finance Commission’s recommendations and assumed that everything will fall in line once the fund is directly devolved to states. The Commission has only dealt with the financial aspects and has not taken governance into account while recommending the devolution of funds. “The decision may be in conformity with the Constitution as panchayati raj is a state subject. But I am not hopeful as states are not enthusiastic about sharing power with panchayats. The government is losing out on a major opportunity to take panchayati raj forward,” he adds.

There are others who hail the decision.

“I don’t know whether states are ready for such devolution of funds or not. But panchayati raj is a state subject and the battle should be shifted to their door steps,” says T R Raghunandan, former joint secretary of the Union Ministry of Rural Development. Raghunandan is now working towards strengthening local governance in Karnataka. “In the past 10 years, the centralised approach to strengthen panchayati raj institutions have hardly helped. Non-profits that work towards sensitising the Centre should work with the state governments for better devolution of power,” Raghunandan suggests.

V S Vyas, former deputy chairperson of Rajasthan Planning Board, agrees with Raghunandan and points out another problem with the centralised approach. The Centre usually follows “one size fits all” policy while preparing schemes for panchayat bodies, without taking into consideration local needs. “The Centre’s decision to devolve the power maybe risky but is the need of the hour. We have to make the states ready to empower their local governance bodies,” says Vyas.

Raghunandan says the decision of devolution should be treated as a move to realisedecentralisation, which will help in the long run. “After all, decentralisation is a policy not scheme. So treat this idea as policy and shift action to states. One cannot sit at the Centre and implement schemes. The ministry should transform itself into enlightened policy makers and become arbiter at the state level,” suggests Ragunandan.