The tsunami is a chance to rebuild self-reliance and governance of the Nicobar Islands. suresh babu returns from the islands to tell nitin sethi how 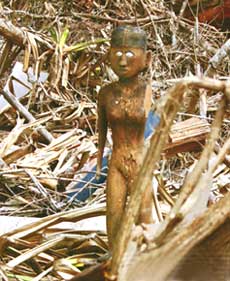 When on the islands do not think Land. Think Water. The Tsunami has wreaked havoc. The government is drowned up to its neck in relief work. No, they call it rehabilitation. On one island sit 150 metric tonnes of mostly perishable goods, milk packets and food, waiting for someone, anyone. There is no one to pick them up, 8,000 odd people on this island apart. For the islanders, the Nicobarese and the Shompen (the two tribes on the Nicobar islands), this is dole. Bait to make them dependent on the government. They watch the mainlanders on the islands relish the dole.Some fall prey to the idea of being spoon-fed. They are made to wait at camps built in cities like Port Blair. They sit around, 3,238 on the last official count in 15 relief camps of Campbell Bay, the township on the Great Nicobar Island.

While people wait, the different arms of the administration and government get enmeshed in silly games of one-upmanship. The civil administration is livid. The army uses its maps and information to make better presentations (slick and aggressive like a battle plan) and wins praise. After all it's a game worth Rs 2,731 crore -- the money earmarked for reconstruction of the union territory.

Caught in the business of relief, the administration has forgotten: people need to go back. Restart lives. But, they are also so central to the theatre of rehabilitation. What if another Tsunami hits, it would be oh-so-tough to go fetch 'these tribals' again. Keeping them huddled together is an administrative necessity; easy to provide rations, easy to manage.

There is some convoluted logic to this: the last time, the government took more than a month to reach the west coast of the Nicobar islands. Some they just flew over. A few islanders survived, riding on pure luck or presence of mind. Like the shaman priest, Pothe of Pulobaha island. He kept on telling the village a day before that the earth would shake, the waters would rise. No one would listen to him; he left the village in a huff, returning the next day only to see his omens come true. He took out a dungi (the small locally crafted boat) and a hodi (outriggered canoes) to the sea and survived the massive 20 metre waves, also saving 43 lives. Then there is Aghu, from Mayabundar island, who clung on to the top of a standing tree as the huge waves broke on the land behind and under him. He survived for 16 days with his two shoulders broken and walked back on his own.

The Nicobarese are resilient. What other way is there to keep your sanity intact when surrounded by such devastation and loss? They itch to begin life anew. 50 youth have gone back to their island, Chaura to do what they do best, fish and take care of their small plantations. 150 more are ready to join them, only if the government would give them a dungi to travel back in. The tsunami ransacked their hodi and dungi . They need implements to fish, to kick-start their self-sustaining plantations. They don't need milk packets. They need boats. They have been the perfect example of how cooperation and optimum use of resources can ensure life in frugality. How else would 2,500 of them survive on an island with only one freshwater source? They know how to harvest water from rooftops. Without the government telling them how.

But now the government wants them to live in cubicles made of corrugated tin sheets. The walls, the roof, the window, the doors, all are of corrugated tin, tin sheds that consultants from Delhi told them would serve as perfect temporary abodes while the heat and humidity beats down on the islands. The n icobarese say they would rather cook a pig in these ovens. Not one of them is occupied. But 3 lakh gi sheets have reached the islands.

'To reach out to the people' the government is building roads that cut through dense forests. Obviously, priceless timber shall be felled. Without doubt, there are lucrative contracts in the offing. But neither the islands nor the islanders need roads. The islanders also don't need the 100 motorcycles that the government has brought as relief.


There is so much wood lying around, all the trees that the tsunami brought down. One just needs to transport them to where it's needed. Instead the government has lifted the ban on timber felling lifted for six months -- to cut the surviving trees. It's going to be a free for all. Officials on the islands in fact want the ban-lift extended. The Central Empowered Committee to the Supreme Court on forests is likely to say no but it is inclined not to allow use of the much-needed fallen timber as well. Perhaps they fear misuse. It's yet another administrative game that people are getting crushed between.

The tsunami was a disaster. The tsunami is such a great opportunity. It's cleaned up the slate. It's a chance to undo what the government has done to the islands in the past 50 years. It's a chance to do things the administration wouldn't dare do normally. Like break the business monopolies on the islands. Take the copra (coconut) business. You could count on your fingertips the traders who monopolised the business of selling copra to the mainland. It was the one of the biggest source of incomes for the island. Each island had its own monopoly and its monopolists. Another example: the arecanut trade -- completely controlled by a clutch of businessmen who would pay a rupee for every ten they made on the mainland. Now the government can get in, reach out directly to the people or their representatives -- the captains (village heads), empower them with assets not dole. Say, to break the monopolies give the islands copra processing units, create a village-level coir industry. Let them add value to their limited produce, something the government has not been able to do in all these years.

The monopolists made life on the island miserable, ensuring that everyone remained economically shackled. They shall again. Unless the government realises that, post-tsunami, these islands need the entire governance system to reconstruct itself and let people rebuild self-reliance.

Soon administrative fatigue will set in, media focus will dissipate and the relief money will disappear. Life for the Nicobarese and the Shompen will come full circle -- living under the shadow of a government that thrives on treating them as poor dependents. If this tsunami cannot change the government's ways what will? If this tsunami cannot bring us closer to them and remove the alienation then nothing can.

Suresh Babu is a research scientist at the School of Environmental Studies, University of Delhi. He has been working on the islands for several years now