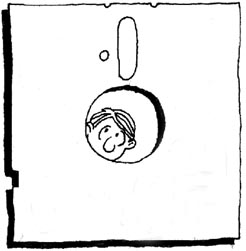 To promote it in rural areas it is essential to cut the hype. Perhaps information technology will not deliver all that it promises even if all infrastructure changes are made. No matter what the experts say, the decision to use it finally rests with the people. All that scientists, governments, policymakers and the civil society can do is provide the option. "IT isn't a magic mantra. There is too much hype. A desire to change has to come first," says Subhash C Bhatnagar, it guru at the Indian Institute of Technology (IIM), Ahmedabad.

The IT industry is dynamic and will grow no matter what. If the government doesn't adapt, it will be bypassed. Right now, all government efforts focus on maximising profits for the software sector. Some rural schemes are thrown in for the sake of political correctness. But shoddy planning ensures that they are a waste of public money. Rather than making it an agent of change for equity, the government is actually financing an urban-rural divide in the digital arena. The urban media blindly follows suit.

"As of today IT for rural development is only a slogan," says N C Saxena, secretary to the Planning Commission who was earlier with the department for rural development. But Saxena is still positive. He points out that land is the main resources in villages, and information pertaining to ownership is often confined to an exploitative few: "Computerisation of land records is one example of how it can go a long way in helping farmers, preventing their harassment at the hands of petty government officials. Take the case of agriculture. The age-old concept of village-level worker for extension activities has completely flopped. The only way you can reach the farmer is by transcending bureaucracy. it can do that. Innovations like drip irrigation can be of great use to farmers and this information can reach them through it. This can also generate pressure for downward accountability in the bureaucracy. Instead of being accountable to their seniors, the bureaucracy will have to be accountable to the people," Saxena stresses. "We have to adopt the strategies through which we can bypass the de-motivated and indifferent bureaucracy. IT can help reach people directly," he concludes.

Several experts say the best way is to take up a pilot project, complete in all respects, show its benefits to the people, and move to another area. "We have to go in for indigenous technologies like cordect to reduce costs," says N Vittal, member of the IT Task Force that reports to the prime minister. The slogan for the it age might as well be: think small, think decentralised. The cordect man Jhunjhunwala and Bhatnagar of iim Ahmedabad predict a major role for the small-scale private sector in bringing it to rural areas on the lines of the spread of cable television. it works better in villages if it is owned, controlled and managed by the community, as against individual ownership, says Subbiah Arunachalam of M S Swaminathan Research Foundation in Chennai. "IT stimulates expansion of the private sector," says Robert Schware, senior informatics specialist at the Global Informatics and Communication Technologies Department of the World Bank Group.

As things stand, government policy doesn't seem to have too much room for sane advice. Its efforts are limited to championing the cause of the software industry. It has to realise one very important thing -- the whole of software industry cannot generate as many votes as the 70 per cent of India that lives in villages. There is good political capital to be made out of promoting rural development through IT, at least in some areas, if not all.