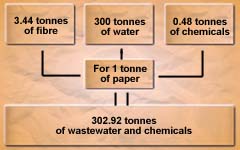 Grasim Industries Ltd has a plant along the river Chaliyar at Mavoor, district Kozhikode, Kerala. It produces rayon-grade pulp and is entirely based on bamboo and wood for raw materials. The mill claims that it has an environmental policy statement, though no document has been provided to substantiate the same. The fact that the mill is not aware of the details of the policy raises the possiblity that there is no policy or if it is there, it is for namesake.

Grasim claims to have an environment department that is clubbed with the research and development wing. The department is shown to have 73 employees, which seems to be very high. The mill's resource consumption is marginally lower than other Indian rayon-grade pulp plants. It has revealed no documented policy on waste management or relations with local communities. Its pollution control equipment is rated as average. The mill has a chemical recovery system and a kiln to recover lime from sludge.The company has not furnished any documented policy on adopting cleaner technology.

But areas where Grasim seems to have performed parti-cularly poorly is water and chemical consumption. While the Indian worst average per unit water consumption stands at 200 tonnes, Grasim uses a whopping 300 tonnes of water to produce one tonne of paper. The mill is still using substantial amount of chlorine-based chemicals. It has to be noted that it is possible to bring down the figure to almost zero kg.

This makes a few things clear. The company uses a large amount of water and chemicals to produce a small amount of products. And it discharges the effluent into the river, downstream of its uptake point. Moreover, as the Kerala Pollution Control Board ( kpcb ) points out, the factory does not even meet the stipulated standard for effluents. The figures indicate that the factory must be polluting the river. And that is just what the local community complains about. They point to a rise in incidence of cancer and respiratory diseases in the region due to pollution caused by the factory.

Scientific studies have indicated that concentrations of some toxic heavy metals were above the acceptable levels in the river beyond Chungapally, 6 km downstream of Mavoor, where the factory discharges its effluent, clearly pointing the finger of suspicion at the factory. Grasim has also been accused of bargaining with the government on wood prices on the pretext that if the mill closes down, the employees will suffer major hardships.

kpcb 's consent for air to the factory is valid up till July 31, 1999. But the consent for water has not been valid since December 31, 1992. According to kpcb , the factory's effluent treatment plant is not capable of dealing with the amount of effluent it generates every day.