Ship-breaking industry, once banned in Bangladesh for violating environment and safety norms, is back in business 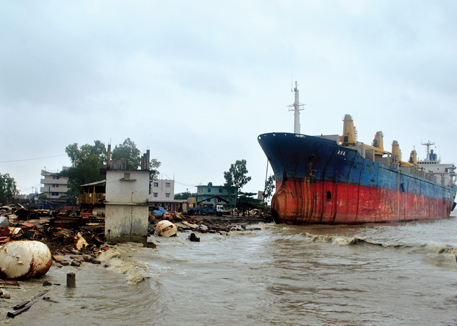 A visit to Sitakunda, the ship-breaking hub of Bangladesh, does not give an impression that only a few years ago the apex court of the country had intervened to clean up the hazardous industry following years of campaign by environmental and human rights groups.

The coastal strip in Chittagong division remains littered with scrap metals stained with toxic oil and chemicals; some of the chemicals are carcinogenic. Stories of accidents and deaths at ship-breaking yards are frequent, but only a few get reported (see ‘Harbour of...’). “Last year, 22 workers died while dismantling ships,” informs Muhammad Sahin, senior programme manager of non-profit Young Power in Social Action (YPSA). “This year till July, seven have died and hundreds have been injured,” he adds.

Ship importing and breaking activities are on a rise, says Rizwana Hasan, director of Bangladesh Environmental Lawyers Association (BELA). The non-profit was instrumental in the supreme court intervention. In 2009, when the supreme court passed its landmark judgement and directed the environment ministry to immediately take steps to ensure closure of ship-breaking yards that do not follow environmental norms, at least 60 yards were dismantling the great hulks, making the industry the second largest in the world. Thirty-six of them were operating without clearances, according to an affidavit submitted by the ministry in the court. The court lifted the ban two-and-a-half years ago. “Now there are nearly 150 yards. About 70 of them are operational,” says Sahin.

Officials with the Department of Environment (DoE) say all operational ship-breaking yards have necessery permits but refuse to divulge the number of the total or operational yards in the country.

Activists refute the officials’ claim. “The administration has legalised illegal ship-breaking yards by giving them permits. These yards fulfil only 10 per cent of the conditions outlined in the environmental clearances,” Hasan alleges.

The court order had brought a temporary halt to illegal activities in ship-breaking yards, says Taslima Rahman of BELA. “But in March 2011 the court relaxed the order, which has allowed the industry to continue its business-as-usual practices,” she alleges.

When the supreme court lifted the ban in March 2011, it asked the government to frame rules on ship-breaking and recyclining within two months. The government followed the order and drafted the Ship Breaking and Ship Recycling (SBSR) Rules by May that year. But the rules have not moved beyond the stage of drafting. When asked about the delay, Habibur Rahman, deputy secretary of the Ministry of Shipping, told Down To Earth that the SBSR rules “are undergoing a process of review by several departments”.

Activists allege that the ship-breaking industry is lobbying hard to delay implementation of the SBSR rules.

In fact, it is said that in 2011 the supreme court relaxed its closure order on erring ship-breaking yards under pressure from the industry.

The ban order had hit the flourishing industry hard. The Bangladesh Ship Breakers Association had contested the ban, saying it will have a knock-on effect on the economy. About 30,000 of the country’s poorest are engaged in dismantling of ships at these yards. Another 400,000 indirectly depend on these yards, like truckers and scrap sellers, or work with allied industries such as rolling mills. Most of them have migrated to Sitakunda in search of work at ship-breaking or related units. The ship breakers association also argued that the ban would cause domestic steel prices to skyrocket because ship scraps meet more than 50 per cent of the country’s steel requirement. More than 350 rolling mills use these scraps as raw materials, according to the Department of Naval Architecture and Marine Engineering of Bangladesh University of Engineering and Technology in Dhaka.

Since the supreme court lifted its closure order, ship breakers have been keeping ship-breaking activities behind closed doors. This Down To Earth correspondent tried to enter a ship-breaking yard to find out the working conditions, but was firmly denied. “The industry has become cautious now,” says Mohammad Idris, who has been working at the yards since he was 10 and has had close encounters with death several times while dismantling ships.

The draft rules outline environmental and occupational safety measures that should be undertaken by ship recyclers, and impose penalty on defaulters. In case of accidents, ship-recyclers must report in writing to the police as well as to the Ship Breaking and Ship Recycling Board (SBSRB) under the Ministry of Industries. In case of major accidents, the yards can remain suspended for inspection for seven days. The rules also specify the responsibility of the authorities in issuing various permits required for ship-breaking.

Officials at DoE say at present ship-breaking industry is treated like any other industry and ship breakers have to apply for permits only from DoE and the Ministry of Shipping. “Under the draft rules, a ship-recycler will have to seek no-objection certificates from a host of authorities, including SBSRB, Customs Department and the Department of Explosives. Both DoE and SBSRB will be required to examine the ship for hazardous wastes,” says Mohammad Shahjahan, director of DoE.

Sitakunda’s long beaches and perfect slopes make ship beaching easy. This makes the coastal strip a perfect zone for setting up ship-breaking yards. “Rampant illegal activities in the yards are earning it a bad name,” admits Zafar Alam, director of the Chittagong DoE. He hopes the rules will help make the industry hazard free and lucrative.