Is the desire for a cleaner environment a mere faddish concern? Some Dutch wisdom goes sour during a recent greenhouse debate 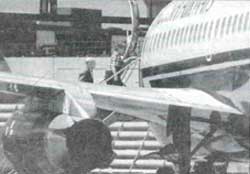 LAST autumn, the Greenhouse Debate -- one of the objectives of the Greenhouse Tour (Down To Earth, December 31, 1994) -- organised by Friends of the Earth (FOE)-Netherlands, sought to show how Dutch society can contribute towards reducing energy consumption. The stated objective of 50 per cent less carbon dioxide emission is "a hell of a job", said one municipal administrator.

In the debates, economists, businesspersons, the clergy, trade unions, consumer organisations, and politicians conjectured the means necessary to achieve the stable state of sustainable energy use. "It is a matter of political choice," said A Heertje, the Netherlands' best known economist (every school student reads his books).

According to R Hueting of the Statistics Bureau, the government should procure necessary data before taking any steps; current investment in motorways needs to be reduced drastically, and further expansion of the national airport curtailed. Hueting characterised the government as "perverse and hypocritical", for it plans such investments, and at the same time sermonises on the imperatives of an environment-friendly life.

At another session during the series of debates, businesspersons seemed less optimistic about saving more energy. "We already do so much," was their complacent reaction, illustrated by extensive self-congratulary narrations about their achievements. The chemical industry, responsible for 85,000 jobs and 15 per cent of Dutch industrial production, is busy implementing energy-saving measures, said W Quik of this sector's interest group.

In the food processing sector, the situation is even more deplorable. C Duthil of the multinational, Unilever, which produces, among many other things, icecream and margarine, described how the reduction achieved in recent years was neutralised by "the changing taste of the consumer". The consumer, according to Unilever, asks for products like low-fat margarine, which requires more energy to manufacture. Neither does business believe in helping consumers to make the right choices -- through, for instance, ecolabelling products. "With ecolabelling, you unleash a rat race," argued Duthil, stressing that claims to ecolabelling cannot be determined or certified.

The entrepreneurs were also not interested in internalising environmental costs in their products' prices. The idea of putting a tax on energy horrifies them. Even if an energy tax were to be levied at the European level -- the European Community is actually planning such a measure -- it would be unacceptable. "I would still lose 15 per cent of my exports, which go out of Europe," said Quik.
Meanwhile, the Dutch government is formulating an energy tax to be implemented in 1996, "in case an European levy is not feasible". The large companies, which gobble over half the total energy consumption, will shockingly be exempted. F Crone of the Social-Democratic ruling party said, "There is no basis in Dutch society for including them."

Major trade unions like the Dutch Consumers' Union firmly reject the consumers' responsibility. L deWaal, a trade unionist, said that he was "exceptionally" annoyed with the businesshouse representatives: "They ignore problems, they ridicule energy saving targets, they expect everything from technology improvements and nothing from market incentives. Entrepreneurs seem to be a different kind of people. They are not prepared to do anything that could hurt them even the slightest bit." M Schuttelaar of the Consumers' Union said that one could not expect much from the consumer: environmental awareness is diminishing, and when it comes to flying or driving cars, it seems as if the issue never really existed.

There is little political will to limit such "consumerist" behaviour. A discouraging educational system and a cautious beginning of the "ecologisation of the tax system" are seemingly the only cards up the politicians' sleeve. But concrete physical measures, like closing down a regional airport, are not viable, argued the ruling party's representatives.

Precisely how the Dutch government hopes to go about achieving the national co2 reduction target of 3 to 5 per cent by ad 2000 remained vague during the debate. The coalition parties are divided over the modalities of the probable action plan if the target remains unachieved. The liberals in the coalition feel next to nothing about additional measures, as J Blaauw, member of parliament, made amply clear.

The problem seems to be one of immediacy: targets marked for the next century are just too far in the future to make much sense to Dutch politics right now. But members of parliament did realise the importance of showing the Netherlands positively in ad 2050. Inspired by the Action Plan of Sustainable Netherlands of foe-Netherlands, Social-Democrat F Cronehe said, "In future, it is possible to organise tranquility. One can show that it is possible to renew an industrial park within 30 to 40 years. One can also more clearly choose between polluting activities that can be carried on, and those that have to be reduced. But with the current policies, I don't dare make such choices."

---Marcel Ham is a freelance journalist and editor of the newsletter of the Dutch Platform for Sustainable Development.