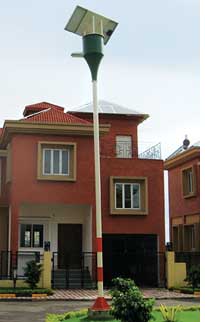 Kolkata's New Town, which has already gained in reputation as a computer engineering and IT hub, now has a new feather in its cap--Rabi Rashmi Abasan--India's first solar powered residential complex.

The "carbon-neutral" housing was conceived of about six years ago by s p Gon Chowdhury, a specialist in renewable energy systems and 2003 Green Oscar recipient. The project was executed on a 0.4 hectare plot of land by Bengal dcl --a state housing board and Development Consultants Group joint venture enterprise, following a proposal by West Bengal Renewable Energy Devlopment Corporation (of which Gon Chowdhury was the then director).

The 25 villas and community hall in this high-end housing use building integrated photovoltaic (bipv) technology and have "solar passive" architecture which reduces the buildings' energy requirements by meeting its daily cooling and lighting needs through maximum use of natural light and proper ventilation.

The houses are structurally identical. Each takes up a 720 square-foot plot, has a mezzanine and first floor and a small lily pool out in front. Water in the pool cools the breeze flowing into the house through adjustable louvres above it--a natural draft circulation process called "the chimney effect," explains Mihir Dey, the project's design and engineering supervisor. The walls have built-in air cavities that act as insulators and help maintain the temperature balance within the house.

The tiled, sloping roofs are fitted with solar panels and the buidings have 100-litre solar water heaters. Solar panels are also integrated into the glazing of the windows using bipv technology, which basically uses photovoltaic panels as part of a building's outer structure so that they serve simultaneously as building 'envelope' material and power generator. This is the first time bipv technology is being used in homes in India.

The solar energy yield per building is an estimated 2 kilowatts per hour (kwh), which accounts for 40 percent of the power needed to run standard household appliances, says Gon Chowdhury. The temperature-regulated swimming pool at the community centre too, is packed with solar roof panels and bipv double glazed surface panels. These can collectively generate nearly 8 kwh. Even the streets in the housing complex, are lit by solar lamps that function according to the intensity of surrounding light.

Electricity generated by the solar power systems will be fed into a grid that also gets regular power supply from the New Town Electric Supply Corporation Limited (nesc). The difference in the power generated and consumed will be adjusted in the residents' electricity bill. The solar energy system also provides a powerful back up for the complex, enabling alternative power supply for as long as 24 hours at a stretch.

The project received only 10 per cent funding from the West Bengal state government and was paid for mainly the future residents, who shelled out an extra Rs 6 lakh for the bipv technology. Priced at Rs 45 lakh, the homes here cost a bit more than similar upmarket houses in the area. But buyers, who are to move in, in October, were willing to shoulder the extra cost since they expect to save on power bills in the long run. 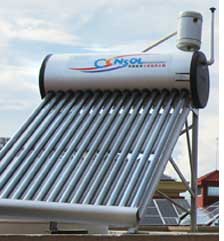 "It is a novel architectural concept in today's time and I mainly bought a house here because of the promise of reduced pollution and a healthy living environment," says Jyoti Poddar, a Kolkata-based businessman and future resident. "With the constant hike in electricity bills nowadays, acomplex with its own source of energy is also a welcome prospect for us. We intend to spend a few weekends there at the onset because the surroundings haven't developed too much yet. But we hope to shift in permanently quite soon."

It is too early, however, to assess if Rabi Reshmi is indeed "carbon neutral" as Gon Chowdhury asserts. "The full extent of its (the housing's) success can only be determined a year after its construction" says Madhumita Roy, a green buildings expert and professor at Jadavpur University's department of architecture. Roy does point out one possible flaw. All the houses are symmetrical, which means they won't necessarily receive the same amount of sunlight and thus there may be a difference in the amount of energy each home produces.