Green is a common word

The commons have gone green in some villages in the Tehri Garhwal district, with the people coming together to afforest an invaluable legacy

Green is a common word 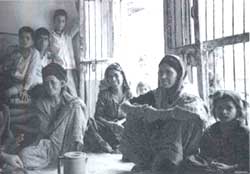 STRAY patches of green in the Tehri Garhwal district tell a different story from the depressing degradation of the other areas in the Garhwal. Garhwal's long-abiding tradition of managing its forests has reasserted itself as people have come together to retrieve the lost acres of green.

That the people themselves are best capable of utilising their forests is illustrated by some success stories. In all the cases in this district, the attempts at afforestation worked best when the women were closely involved. At the 3 villages of Dadua, Gaindee an 'd Koti in the valley, an active women's council has taken over the initiative to regenerate lost forest cover. In the neighbouring Lekhwargaon village, the pundits (priestly caste) continue to nurture a sylvan setting, just as they have been doing for the past 300 years. "We are the oldm forest management committee in the Tehri Garhwal district says a proud Sampurnanand Pehnewly, gram sabha (viliap council) member of the village.

About 130 families live in Lekhwargaon. The inhabitans have traditionally been clerks and mi.pisters to the Rajas Tehri and were given traditional rights to 120 ha of foresiL Today, the Raja is history but his legacy remains. The fores Or consists of both civil soyum (commons);Iand and reserve kw est land (see box: Uncommon sense). The trees in the soyma land are mostly banj, bhimal, chestnut and kaphooL A few, Jars add to the grace.

"But we do not plant deodar," explains Rama Pelmewly, gram sabha member and a college lecturer. "It commercial tree and we have no use for'it. Besides, we do not want to attract the contractor's axe." According to Darshini in of the village, "We have no water scarcity in our village 1"Use of the forest." The forest is administered by a van pwti (forest council) appointed by the gram sabha, in which kast I person represents each family. The members of the m sdibha informally select a small group of about 50 for the a samiti.
The task of protecting the forest is entrusted to a chowkidar urd), Purnanand Pehnewly. He is a short man: "I am only wt tall," he jokes. "But I guard a forest which is several kilogres long." Purnanand's family has traditionally been van 6haks (forest custodians). He is paid a paltry Rs 250 a nth from collections from each family in the village. "For wars I have guarded this forest," he says.

Having survived a bear attack, Purnanand patrols forest everyday, armed with a licensed gun. At an he whistles and the forest is declared open for village women. At 2 pm he whistles again, sigIhng the forest closed. Each woman is allowed to kct as much dry wood as she can wrap around a kr 4 handspans long. However, herbs and dry leaves freely collected. "We mix dry leaves with cowdung use it to fertilise our fields," says Kamala Devi, a resident.

First time offenders caught breaking the rules of eg the forest are let off with a reprimand; the second c round, the offender must abjectly apologise; the 4 time, a fine is imposed; nabbed for the fourth c. the offender is handed over to the panchayat that rs out any punishment it deems fit. But if a person n another village is caught collecting fuel and fodder from the forest, Purnanand is free to seize the implements of the trespasser.

However, efforts at protecting the forest have been fraught with tension and conflict. alys Sampurnanand Pelmewly, "Neighbouring villages resented us because we did not allow them to use our forest. In 1977, the Gar and Sinwalgaon villages took us to court. We went all the way to the Supreme Court and the judge upheld our traditional right to the forest."

But a bigger danger looms ahead. The Public Works Department (PWD) intends to build a road connecting Lekhwargaon to Lamgaon and neighbouring villages, which will cut right through the forest. The villagers do not want the road at the cost of the forest. Says Pitamber Dutt Pelmewly, another gram sabha member, "We do need the road, but the PWD should change the direction and cut through our fields instead. We can sacrifice our fields but not this precious forest which we have safeguarded for 300 years."
Further down the valley, afforestation attempts hinge on women's efforts to improve degraded gram sabha land. In 1988, the women of Gamdee, Koti and Dadua villages were'persuaded by Pratap Shikar of the Jan Jagriti Sanstha, a local NGO, to form a Mahila Mangal Dal (MMD) to regenerate part of the commons.

Dadua village concentrawd its efforts on 6 ha of civil soyum land, Gaindee village on 5 ha of gram panchayat land, and Koti village on 12 ha of gram panchayat land. The 3 villages faced stiff resistance from the neighbouring Aampatta village, which claimed traditional,rights over the territory. Says Ujala Devi of Dadua, "At night, some of them broke our boundary wall and cut the sa@lings we had planted." The district magistrate, Anand Mishra, resolved the conflict as old records revealed that no such rights existed.

Trees required by women for their own use were planted on these lands - banj, bhimal and guriyar. "The saplings Women's efforts bring brighter prospects for their children began to grow quickly and we were very encour- aged," says Sitala Devi, a shy, middle-aged woman in Dadua. Anyone trying to desecrate this patch of green was penalised. At Dadua and Gaindee, the work of protection is undertaken by the MMD itself f ore!"We also keep a close watch on each other," says local Ujala Devi. "After 3 years of plantation, we struck land water near an oak tree and this was taken as a sign are s of good luck."

One woman from each family in the 3 villages is who a member of the mmi) and in each village an 500 adhyaksha (chief) is elected for a term of 5 years. depa The MMD meets at least once a month, when ture, accounts are presented and ongoing programmes beco discussed. "For the first 3 years, we did not use the land," says Srimati Dulari, MMD adhyaksha of Koti, local "Now, in September, when the grass is high and Shiki thick, we hold a general meeting. The grass is harthaV vested from September to March and is allowed to map regenerate for the rest of the year. The protected land is divided into equal por tions and grass rights are sold to the women of the MMD. The money is deposited with the MMD to be used for the upkeep of the village." The chowki dar's salary is also paid from the pro ceeds of this sale.


The women have realised that unity is strength. They have travelled to New Tehri town and lobbied for a primary school near their village. Today, a government school stands witness to the success of their efforts. Matters like buying sewing machines and building gobar gas plants - and latrines - feature prominently in the meetings.

However, all is not well in the valley. In the neighbouring village of Agrakhal, a once lush forest looks denuded. Recalls village pradhan (chief) Gulab Singh, "In 1988, the gram sabha decided to restore about 20 ha of forest reserve land adjacent to the village." For 4 years the land was left alone and it began to regenerate itself. Says Singh, "We planted banj, but the land did not need our help."

In 1990, the forest was declared open for limited use and women were permitted to enter and collect grass, dry leaves and twigs. Animals were not permitted to graze. The forest began to partially fulfill the needs of the village. But, in 1992, the forest department (FD) fenced off the land and appointed a chowkidar. As a result, the very people who have nurtured the forest for 4 years now began to systematically destroy it.


"Women are the best protectors of the forest and its worst raiders," says Gulab Singh. Caught in this strange crossfire between the FD and his own people, Gulab Singh does not know who to blame. "The women of our village sneak in to collect leaves and hack branches of trees," he says, adding that "the forest has not been able to benefit the villagers after the FD took over the land".

The efforts of the FL) to revive dead forests are viewed with scepticism by most villagers. Says Attar Singh, the pradhan of the neighbouring Kotgaon village, "They plant strange trees and nobody cares to look after them." Adds Gulab Singh, "The chowkidars hired by the FE) are worse than clerks. The moment their backs are turned, the women raid the forest. Degraded forest cover can only be revived by handing the forests over to the people." Attar Singh alleges that the FD contractors axe trees and smuggle them away under the cover of night.

The people prefer the banj tree, but the FD plants miles of chir trees. Says Ranjana Mahajan, divisional forest officer, civd soyum lands, "Reviving degraded forest cover is a losing battle. Because of the poverty, there is heavy biotic pressure. This makes regeneration much more difficult. Chir is planted because it is a fast-growing tree."

Perceptions are changing slowly in thi Garhwal and the people are, in a small way, taking matters into their own hands. Trees locally used are being planted and the forest management techniques based on local traditions are being revived. The afforestation success story, therefore, invariabl hinges on the self-preserving altruism of the local people.