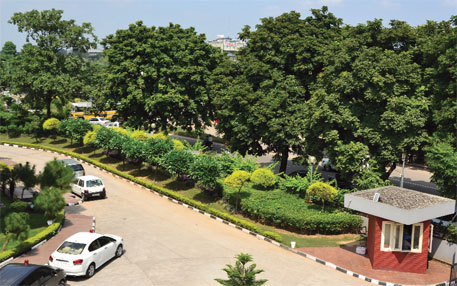 Designing sustainable buildings in a composite climate is a challenge. The techniques that are effective during summers do not work in winters. But a building in Chandigarh has achieved this. More than 10 years ago, the Punjab Energy Development Agency (PEDA) decided to construct an office building that utilises the movement of the sun for lighting, cooling and heating.

The Rs 5.5 crore building, a pilot, was ready in 2004. Six years later, the Bureau of Energy Efficiency (BEE) awarded it a five-star rating, the highest grade of energy efficiency. With a built-up area of 6,146 sq m, the building incorporates the techniques of passive solar architecture that is based on seasonal and diurnal variations in the sun’s movement (see ‘Know the building’). Monuments like the Red Fort in Delhi were designed using these techniques. The PEDA office has an energy performance index (EPI) of 14 kWh/m2/year (the lowest in the country) in the category of non-air-conditioned buildings.

EPI is the ratio of the total energy used to the total built-up area. The EPI of commercial buildings is above 180 kWh/m2/year and the benchmark set by BEE for buildings compliant with the Union power ministry’s Energy Conservation Building Code (2007) is 140 kWh/m2/year. By following passive solar techniques, the PEDA office has become one of the most energy-efficient buildings without adhering to the code, which came later, says Harsimran Singh, an architect in Chandigarh. According to the PEDA building’s architect, Arvind Krishan, unlike conventional buildings, the office’s design is in accordance with the external envelope, which he calls solar envelope.

This envelope refers to the features and materials used in the building’s skin that makes it responsive to varying weather conditions. The internal structure has floating slabs which help in air circulation. The building is oriented in the north-south direction, minimising solar exposure on the western and eastern facades. Although a building’s southern facade can be shaded, the western façade remains exposed to the setting sun and cannot be shaded, he explains.

A simulation-based study by the University of Nottingham in the UK says the PEDA building functions successfully as a passive solar complex.

They are made of two layers of bricks with a 5 cm air gap in between. In southern and western façades, insulation (consisting of 60 cm by 60 cm panels of 5 cm thick rock wool wrapped in polyurethane sheets) has been placed between the layers of bricks in addition to the air gap. This is done to reduce the amount of heat transferred from the outside to the inside through the walls. The combination of a brick wall with air gap reduces heat transfer by 50 per cent as compared to a conventional brick wall. If insulation is added along with the air gap, the heat transfer decreases by 85 per cent.

As maximum heat gain is through the roof, a rockwool-and-polyurethane insulation at an air gap of 5 cm from the concrete slab has been placed. Top layer is made of mud phuska and brick tiles for further heat-proofing.

These concrete domed structures on the southwestern façade are one of the well-recognised innovations of this project. The domes have horizontal and vertical intersecting fins with glass fixed in the voids. These voids allow natural light with reduced glare. The shading action of the fins allows indirect sunshine to enter the building in summers and direct sunshine in winters (see figure). 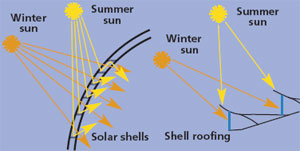 A portion of the roof of the atrium (open space in the centre of the building) is covered by a lightweight shell roofing. The roofing consists of 10 cm of high-density EPS (extruded polystyrene) sandwiched between high-grade FRP (fibre-reinforced plastic) sheets reinforced with steel.

In summer the sun is almost overhead at noon while in winter it is at a lower angle. Keeping this in mind, the shell roof is angled in such a manner that the opening beneath the shell is shaded from the summer sun but allows the winter sun to penetrate.

There is an integrated 25 kWp solar photovoltaic plant in the building. More than half of the building’s electricity requirement is provided by the panels. The panels are placed on the roof of the atrium, in between two sheets of toughened glass. This helps filter daylight.

The wind tower (7) is expected to function as a non-mechanical air-conditioning system, but the mechanical component for the tower (ambiator) is yet to be installed. It will soon be installed, say PEDA officials. The ambiator uses the method of indirect evaporative cooling in which water cools the air without coming into contact with it. This method works well in humid conditions, says Darshi Dhaliwal, responsible for devising the ambiator. Currently, the tower is used to expel hot air from within the building.

Fresh air rushes in from the openings in the envelope, passes over the floor and escapes through the tower top. Due to the building’s expanse and workstation panels (8), this flow is inadequate to maintain thermal comfort. So, coolers have been installed.