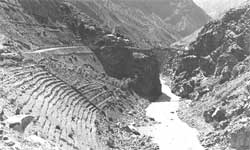 "if you look at the figures of the Van Mahotsav (forest festivals), you will find that millions of trees have been planted. But their survival rate has always been under question," says Prem Kumar Dhumal, chief minister of Himachal Pradesh. He talks in similar vein about the crores of rupees that have been sunk in development schemes so far, without producing any results. His solution to the problem: decentralise forest management and formally involve Non-governmental organisations ( ngo s) in developmental planning.

Ever since he took over as chief minister in March 1998, Dhumal, a professor-politician, has enacted or initiated several rules and policies aimed at enhancing people's participation and improving the environment. Dhumal's personal staff, top bureaucrats and ngo s of the state, say that the low-profile Bharatiya Janata Party leader is always open to new ideas. Critics say that he has no option. Twice member of parliament from Hamirpur constituency since 1984 and state party president since 1993, Dhumal has little experience in governance. But his pragmatic thinking has won him many admirers.

On December 14-15, 1998, he invited leading ngo s of the state for a two-day symposium to chalk out the modalities for government- ngo participation. "Without his personal initiative, it would not have been possible," says Kulbhushan Upmanyu, a respected leader of the Save Himalaya Movement which is based in Mandi district. The chief minister takes personal interest in clearing environment programmes, says Rajwant Sandhu, secretary, forests, rural development and science and technology.

For example, he allocated Rs 10 crore from the state budget (of the state's total annual plan of Rs 1,440 crore) for a community forestry scheme. Under this plan, local communities manage the money and decide the mode of afforestation. He also set up several state-level consultative committees with ngo representation to ensure participatory development. He was instrumental in enacting the 1995 state law controlling non-biodegradable waste disposal which took effect from August 31, 1998 in cities, and from November 26, 1998 in villages. The government also banned the use of coloured, recycled plastic bags in the state with effect from January 1, 1999. Despite denudation of hill-slopes, forest area in the state grew last year.

The state has had four joint forest management schemes, aided by the World Bank and other international donors, but people's participation was absent. "There was no community participation. They were fund-driven, not need-driven," says Iqbal Singh, an activist with Society for Advancement of Village Economy, an ngo based in Mandi. But the new community forestry project in the state ( Sanjhi Van Paryojana ) involves the people in these programmes.

A close examination of the new projects in the state reveal how environment programmes can succeed by maximum people's participation and minimal bureaucratic hurdles.
The state has four major afforestation projects which has funding of hundreds of crores. These projects had to have "people's participation" due to the insistence of donors. But the forest department's version of participation hardly met people's expectations. "The government experiments, but the community often suffers," notes Singh. For instance, the park project in Kulu ousted many families, inviting a lot of criticism. In turn, ngo s opposed Joint forest management ( jfm ) projects.

But under the Community Forestry Project, micro-planning of the area is done with the help of ngo s, says Sandhu. Units of 30 to 100 families can form a community, elect their representatives, get themselves registered as a society and handle their account for the project. Each community can decide what kind of activity is needed in their area -- watershed development, making bunds or planting trees, points out V K Tiwari, deputy conservator of forest (monitoring and evaluation). The idea of choosing small clusters of families and hamlets is to ensure longevity of the project and minimise conflict, adds Tiwari.

"We will provide space, time and technology for this project, ngo s will provide us with the social inputs," says S K Pande, principal chief conservator of forest. Half the benefits from the project goes to the local community, 10 per cent to the local panchayat and 40 per cent to the government, according to officials.
Himachal Pradesh gets very little ngo funding, just about Rs 4 crore, when the total ngo funding by the Indian government is Rs 200 crore, notes Ashok Thakur, deputy director, Council for Advancement of People's Action and Rural Technology ( capart ). The thrust areas of the government are health, watershed development and afforestation.

"Earlier the people's participation was limited," says B S Rana, director of Manav Seva Sansthan, Bilaspur, an organisation which is involved in watershed development activities. In Bilaspur, people had to organise a signature campaign to get money released for watershed work. Often the government released miniscule funds, says Rana. "Even then the government still thinks of watershed in terms of check-dams, instead of vegetation," he says.
In 1995, the Congress government enacted a law restricting the disposal of non-biodegradable waste in public places. Packing garbage in polythene bags and littering the hill-slopes were made acts of offence. Garbage bins were placed all over the city, but there was no enforcement. "Many reports misinterpreted the notification by saying that plastic bags were banned, but they were not," says Sandhu. Sandhu and his colleagues pushed for a strict implementation. The chief minister agreed.

The Dhumal government has also restricted the use of packaged material. Plastic bags choke drains, block grass growth and contribute to soil erosion. "I know a ban will not be 100 per cent effective," admits Sandhu. But it is a beginning, she says. Inspectors have been asked to impound plastic bags and fine the vendors who violate the norm. However, the mention of waste disposal has raised many eyebrows in the media and ngo circles. In June last year, a Rs 28-lakh waste plant was inaugurated by the chief minister in Salogra, Solan. Run by an ngo , the plant remains idle, as segregation of waste has to be done manually.
If scientists of the State Council for Science and Technology have their way, then water shortage, especially in towns like Shimla, will become history. The state cabinet has decided to make rainwater harvesting mandatory for all new constructions and the existing public buildings in the state.

Himachal Pradesh receives an average of 1,134 mm of rainfall every year. Even then, there is a shortage of water in almost all the 59 urban settlements in the state. The government spends about Rs 12 to provide one kilolitre of water at Rs 1.80. "But only less that six per cent of the water supplied is actually used for drinking and cooking purposes. People do not need highly treated water for other purposes," argues R K Sood, joint member secretary at the State Council for Science and Technology. One mm of rain on every 1 sq m of land can collect one litre of water, he notes. The council has therefore suggested that every house must build a separate water collection tank. No building plan will be given approval without this. All commercial and institutional buildings of over 1,000 sq m plinth area should have rainwater storage facilities. Toilet flushing and gardening should done from the rainwater collected. "It is a beginning, but much more needs to be done," says Sood.