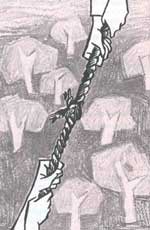 AMERICAN greens are seeing red. April 22 this year, the 25th anniversary of Earth Day, saw them bludgeoning the Republicans with slogans and protests. America's environmentalists, so far one of the most influential pressure groups in the country, have never felt so betrayed before. Congress' attempts to "remodel" the major environmental laws not only rattled their agenda, but showed them that the mass base they had taken for granted could vapourise - with a little help ftom Republican rabblerousing.

The proposal to "overhaul" the 1972 Clean Water Act has especially agitated environmentalists. On April 7, the House Committee on Transportation and Public Works put its stamp of approval on a bill proposing sweeping revisions to this landmark law, which was enacted to protect the "chemical, physical and biological integrity of the nation's waters".

The bill, an adroit pro-corporate turnaround from its original unbending environmental purpose, will bar federal regulators from imposing new restrictions on waste discharges from industrial plants into lakes or streams if the costs outweigh the benefits. What environmentalists find most disturbing is the clause which seeks to drastically narrow down the definition of which wetlands need federal protection.

The new definition is expected to end federal jurisdiction over at least half the regulated wetlands by "devolving" regulatory responsibilities from the federal to the state and local governments. "The Environmental Protection Agency (EPA) and Washington will not be able to dictate to the states and localities as they have been doing in the past,- exuded Bud Shuster, chairperson of the House Committee.

Shuster is hankering for "commonsense" to be brought into the state's approach to environmental protection. "Overzealous wetlands regulations turn every mud puddle into a wetland. For example, the Morris Town (New Jersey) airport was not allowed to cut down a tree blocking the runway view of the control tower because the tree was supposedly in a wetland," raged Shuster's spitfire open letter in the New York Times.

The farm and land promoters lobbies applauded him. They have a history of griping about the "complex technical" standards used to determine. whether property may be developed, and about these standards being applied to wetlands that serve "little ecological purpose".

The conservationists are screaming blue murder. They retort that the House Committee's definition is a "political contrivance" that leaves the lands vulnerable to attacks from Ivoracious land sharks. Shuster, they have alleged, has "sold" inillions of acres of valuable wttlands to real estate devel- opers atid oil companies. As evidence, they point to the fact that to draft this crucial bill, he roped in industry's lawyers.

In a stinging retort to the Congfessman's open letter, David Ortman, director of the frontrunning environmental NGo, Friends of the Earth, said, "The Clean Water Act does not regulate the cutting of trees, whether in a wetland or not ... and Mr Shuster's 'mud puddle' is actually a significant wetland of 75 acres (about 30 hectares)."

Shuster's action has also come as a bolt from the blue for the scientist community. A panel of experts convened by the National Academy of Sciences (NAS), the nation's pre-eminent scientific advisory group, is almost ready to present the results of a 2-year-long wetlands study requested by Congress. The purpose of this exercise was to identify the percentage of the earmarked lands - ranging from prairie potholes to huge tidal estuaries - that is trulv worth oreservinp- Srientict, are appalled that the House could not stall the issue at least till the NAS's report was made public. Their point was that there can be no doubt whatsoever on the importance of protecting and preserving these waterbodies which provide habitat for wildlife, filter polluted water and absorb floodwaters.

"Basically, the science is very complex and the legislation is very simplistic," said Joy B Zedler, a wetlands biologist at San Diego State University and a member on the NAS panel. The proposed law seeks to classify the wetlands under different categories on the basis of their water levels and the kinds of plant and animal species they house, with the entire exercise aimed at pruning federal protection to the maximum extent possible. Scientists contend that it is almost impossible to rank wetlands in order of relative ecological value as their conditions vary seasonally and regionally.

The loudest protests have come from the EPA authorities, seething with resentment at this brazen attempt to shove them into the backseat. "It is a programme of counterfeit wetlands protection," raged Robert Perciasepe, top-rung water quality EPA official. "The bill proposes scientifically unsound methods of identifying wetlands that the Association of State Wetlands Managers estimates would eliminate some 60 to 80 per cent of the nation's wetlands from regulatory protection, including large parts of the Everglades and the Great Dismal Swamp."


As if this were not enough, another Republican'Scud is heading dead-on at the bastion of environmental ideology, the Endangered Species Act. The act allows federal authorities to prevent loggers and private property owners from foraying into forest areas that are known as habitats for rare animal and bird species.

Further, any species to be declared endangered will have to run the gauntlet of a new bill requiring a vote of the legislature, initiated by Republican Senator Slade Gorton. The bill will also force the government to compensate landowners whose property values decline due the enforcement of the act. In other words, federal officials will have to lobby and clear their way through bureaucratic brushwood to put a species on the endangered list.

At least on this issue, the Republicans appear to be carrying the public with them. The Endangered Species Act was passed in 1973 primarily to protect animals threatened with extinction. But over the years, it has degenerated into a captive tool for the federal regulation of private land use. It has been branded as the main catalyst of a nationwide property rights movement, apparently fed by the peoples' growing aversion to the "excesses of environmentalism't.

"To suggest that progress ought to be held up because of various exotic creatures, violates common sense," says Lew Uhler, chairperson of the kight-wing national coalition named - truculently - Get Government Off Our Backs. "Intelligent people cannot believe that a salamander or a kangaroo rat is as important as their families or their livelihoods," he says.

The Republicans have reason to chortle. Congress has cashed in on the growing public disillusionment of all things environmental. This is the flip side of what is seen as shrill, autocratic environmental overkill, even by pro-environment politicians like Democrat Congressman Tom Hayden. "it (the environmental movement) needs immediate and dramatic renewal," he says.

Greenwatchers are convinced that it is time that the electorate is introduced to effective and affordable conservation programmes, which should not be allowed to be scuttled at the whims of politicians driven by corporate interests. The frightening possibility is of the antienvironmentalist lobby getting away with proposals to clobber those environmental programmes that voters believe - often mistakenly - do not work anyway.

Green activists have also got the message loud and clear. Mark Murray, head of the pro-recycling group, California Against Waste, is trying out a new strategy to hardsell the pro-green bills he is pushing this year. Instead of emphasising litter reduction and the Bill other ecological benefits of recycling, he is talking about creating jobs and increasing efficiency. "For too long, it was easy to persuade our audience that environmental protection was simply the right thing to do. We're paying for that now," he rues.

But now environmentalists seem to be all set to make up for lost time. On Earth Day, various groups launched a "Save the Planet" campaign by circulating a petition demanding that Congress maintain the standards set by the landmark environmental statutes."The environmental community is galvanised like never before," enthused Fred Krupp, executive director of the NGO, the Environmental Defense Fu@d. "We are prepared to go all out to preserve the strong environmental legacy we've worked hard to build."

I Behind such seemingly anachronistic, optimism is the fact that the Clinton Administration is unequivocally in their camp, even though Congress is hellbent on sidelining them. For a while earlier, environmental groups were left guessing about whether the go0ernment - beleaguered by allegations of political wimpishness - would take the easy way out and dump them. While vice-president Al Gore had been spewing venom at the "marauding" Republicans right from the outset, President Clinton himself had preferred to waffle.

Fortunately, Earth Day saw him barge out explicitly, threatening to launch offensives against Congress if it carried on with its efforts to "erase 2 decades of environmental gains". Clinton orated in the third person, "The President will vote ... and the President will vote no. Americans have stood as one to say no to toxic food, poisoned water and dirty air ... It would be crazy to forget the lessons of the last 25 years." For the 300-odd crowd that gathered at a Chesapeake Bay water- front park in Maryland, Washington, this was a declaration ofwar, belated but welcome.