As the water crisis surfaces yet again, illegal borewells spring up in and around Delhi. Binayak Das and Suresh Babu on a plummeting water table and rising official apathy 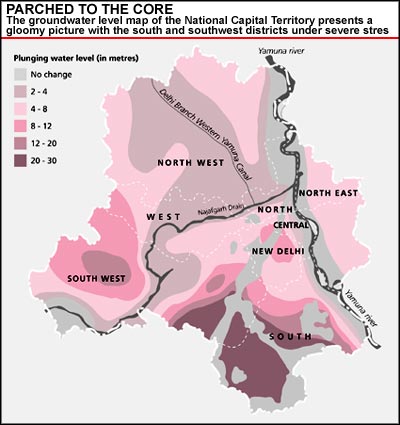 It's that time of the year again when mercury rises and taps run dry. The acute water shortage forces residents of even metropolises such as Delhi to send Mayday messages to officials. But demand far outstrips supply. This wide gap is filled by the illegal extraction of groundwater -- a rising trend that has led to an alarming dip in the water table of the National Capital Region (ncr). Ironically, official statistics do not paint such a grim picture because they gloss over actual figures pertaining to groundwater usage.

In Delhi, the total water demand is 3,600 million litres per day (mld) while official supplier Delhi Jal Board (djb) is able to provide only 2,950 mld. Not only is most of the shortfall of 650 mld met by groundwater abstraction, djb itself taps this source. "We extract 585 mld groundwater," reveals P K Tripati, chief executive officer of the board. This, in effect, means that the capital's groundwater dependency is almost 1235 mld. S K Mohiddin, a Central Ground Water Board (cgwb) scientist, admits that this is a "logical conclusion".
A sharp increase in the number of buildings has led to the large-scale depletion of groundwater in the capital -- particularly in its south and southwest districts -- (see map: Parched to the core) and its neighbouring towns such as Gurgaon. The water level is diminishing at the rate of 1 metre (m) to 3m per year. In some places, water is extracted from a depth of up to 60m or about 180 feet. In view of this drastic dip in water levels, the Central Ground Water Authority (cgwa) had declared Delhi's south and southwest districts as 'notified areas', banning abstraction of groundwater. However, the authority has recently relaxed drilling norms in these two districts, allowing "small tubewells".

A visit to some of the establishments of the capital shows how rampantly groundwater is being tapped. The m-block market in Greater Kailash-1, famous for its shopping arcade, houses about 100 buildings within a 2,500-square metre quadrangle. "Almost all the buildings have their own borewells," discloses a local restaurant employee.

D B Narang, a resident of r-block in New Rajinder Nagar, says: "Apart from the water from the pipeline, we use djb-installed tubewells to meet our requirements." djb has a total of about 2,200 registered tubewells.

Meanwhile, the tanker business is also thriving amid the scarcity. Unfortunately, in this case too groundwater is extracted. Mustaq, a tanker driver, gets his quota of water from tubewells in Mahipalpur. "I make two to three trips every day," he says. His tanker has a capacity of 10,000 litres.

In fact, djb itself is a culprit when it comes to groundwater abstraction. "In south Delhi, the cgwb permits extraction from a depth of 30 m but djb itself violates this limit and goes deeper," laments Mohiddin.

The situation is worrisome in neighbouring towns also. According to cgwb studies, in Gurgaon the water level is falling at the rate of 1m per year. The Haryana Urban Development Authority (huda) is gearing up to accommodate 2 million people by the end of 2020 in this town with a present population of 0.5 million. However, the corresponding water supply scheme is designed to cater to a population of one million only.
Today Delhi and its surrounding areas are in deep water (figuratively), thanks to the short-sighted policies of the development authorities and the lack of coordination between them. When a land is to be developed under the masterplan of Delhi, djb is consulted on its overall capacity to supply water. Anil Barai, director of buildings, Delhi Development Authority (dda), says: "While preparing the masterplan of the city, the water and power supply boards are consulted. dda undertakes development in demarcated zones only." But there is no review or sanction by djb when dda clears a building plan. Consequently, dda does not bother to ensure adequate water supply or indeed ever ask if the authorised development will have adequate water supply. It is a particular problem with large developments -- residential apartment complexes or office complexes. The same is the case with other sanctioning agencies such as the New Delhi Municipal Council (ndmc) and huda.

But there have been occasions when dda has sought the advice of the water board. Tripati cites an example: "In areas such as Vasant Kunj, dda was advised by the board to put forth the condition that these colonies would make their own arrangements regarding water." dda, however, went ahead and sanctioned the development of the colony, "later pressurising us to supply water", he adds. With no guarantee of water availability in these high-rises, residents fall back on the most common option -- digging borewells.


In a half-hearted attempt to tide over the crisis, the cgwa has over the past two years issued numerous notifications which ban or control the withdrawal of groundwater in certain designated 'notified areas' of the ncr (see box: Law highlights). But these haven't been accompanied by awareness campaigns to inform the denizens about the orders. As people are not aware, "they get a tubewell installed without seeking permission", says Amit Bhatnagar, an architect of Gurgaon. Worse still, monitoring has been inadequate leading to ineffective enforcement.

In these notifications, the cgwa has made registration of tubewells mandatory for all owners in 'notified areas' where the water table has reached critical levels. These include parts of Delhi, Gurgaon, Ghaziabad and Faridabad. Apoorva Singh, the district commissioner of Gurgaon, reveals that there are about 3,000 registered tubewells and an equal number of unregistered ones. According to cgwb figures, Delhi has about a lakh registered tubewells and twice the number unregistered about which the authorities are at a loss for words. A sceptical R K Kohli of Som Vihar says, "The groundwater notification does not seem to be working."

Singh says, "Illegal borewells can be identified only through inspection or if a concerned neighbour informs us." Though cgwa stipulates a clampdown on offenders, its statistics on action taken since August 2000 are dismal -- seizure of 15 drilling rigs and sealing of seven illegal tubewells!


The ncr's future seems bleak unless remedial measures are taken expediently. In this context, rooftop rainwater harvesting is considered a suitable solution. While the Union urban development ministry has notified that all new buildings have to install rainwater harvesting structures, the cgwa has mandated under the Environment Protection Act that all existing buildings in the 'notified areas' must do rainwater harvesting. The authority also set a deadline failing which it warned that the tubewells on the premises of residents would be sealed. But sadly two years after the notification was issued, and many meetings later, only a handful of buildings in this region can boast of rainwater harvesting structures. Meanwhile, the deadline for installing these structures in south and southwest Delhi has been extended for the fourth time to June 30, 2002.

Sources at cgwb, which is responsible for providing water harvesting designs in Delhi, reveal that out of 17,000 to 20,000 housing societies in Delhi only 30 to 40 have approached them for technical advice.

In Gurgaon, huda has a provision for suggesting sample designs of rooftop water harvesting systems. But here, too, there are no takers. D S Dhanda, sub-divisional engineer in the authority, says, "Only if we are asked for these details, do we provide them." In other words, there is almost no effort either in Delhi or its surrounding areas to inform the people about the notifications or the steps that need to be taken to implement rainwater harvesting.

Sekhar Raghavan, a keen proponent of rainwater harvesting in Chennai, emphatically advocates the concept for other cities also. He, however, sees citizens' participation as a crucial component of the process. He feels that the people should first be informed about the merits of the system, after which they must chip in to make rainwater harvesting, and therefore sustainable development, a successful concept.