Growing organic tea in northeast India is a difficult task

Growing organic tea in northeast India is a difficult task 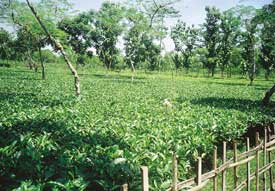 It is not a widely known fact, but 25 per cent of the total tea produced in West Bengal and Assam, and other northeastern states is produced by small growers. Their contribution to the total national tea production is 14 per cent. Very few of these small growers are officially registered with the Tea Board. In Assam and West Bengal, a grower with a tea plantation of 10 hectares (ha, 75 bighas) or less is classified as a small grower by the government. In the case of the small growers of the northeast, garden sizes vary widely and their modus operandi also differ. Roughly speaking, there are three categories those with 5-10 bighas or less -- mostly paddy farmers who are growing tea for extra income; those with 5-10 ha -- producing leaf but not processing it; those with 5-10 ha under tea who are processing their own leaf in small tea factories either on site, in an industrial area or at their residence.

A downturn in the tea industry, which began in 1999, has hit this class of tea producers the hardest. This has been caused by various factors, chiefly international competition, aggressive marketing by soft drinks companies and high cost of production. European buyers have gone for Kenyan teas since their cost of production is much lower and Kenyan growers have also shifted to organic production much sooner than Indian growers. Kenya, Sri Lanka and Indonesia have stolen a march over the Indians due to government support both at the production and the marketing stages. The writing on the wall is clear for Indian growers -- cut down costs of production, go organic, follow good management practices or go down the tube. 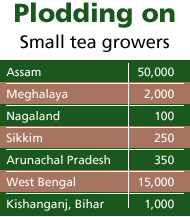 Look at the numbers. What does it cost today to start a small, viable tea garden in the northeast right from scratch? In Assam, at Rs 2 lakh per ha for land and Rs 1 lakh per ha for a tea plantation, a 10-ha garden would cost Rs 30 lakh to get started. A basic tea processing unit including machinery, electricity generators and buildings would cost about Rs 10 lakh. Thus a minimum investment of Rs 40 lakh is required for a 10-ha garden in Assam. The figures may vary slightly for West Bengal and the other northeastern states, say tea planters.
Conversion to organic production may seem highly desirable for small growers, but the ground reality is somewhat different. The lack of adequate resources, training and manpower has kept the majority of small growers bound to chemical agriculture. Many wish to break out of this vicious circle. Organic is viable because it reduces input costs, and improves the quality of green leaf and makes it more acceptable in foreign markets.

By switching, farmers can hope to make a profit. Tea planters with education and information are keyed in to the benefits of organic farming and have made a switchover or are in the process of conversion. They constitute less than one per cent of the small growers, though.

One big hurdle is that organic certification by a recognised agency costs money and requires a mandatory waiting period of three years before the certificate is given. Very few growers have the luxury of going through this tedious process. Arijit Bhuyan (see box Ancient wisdom) who owns Bogamati tea estate in the Karbi Anglong hills of Assam was certified by Skal, the organic products certification body of the Netherlands. It took two years and Rs 30,000. Bhuyan got a reprieve of a year since his garden is on virgin land where no chemicals or pesticides of any sort have ever been used.

While the big growers and gardens engage the services of consultants and experts to guide them in the process of organic conversion, for the small grower it is a leap of faith. Only through trial and error do they arrive at satisfactory practices of cultivation.

External organic inputs like purchased cowdung manure, neem oil, neem cake and branded biopesticides are very expensive and their availability in remote areas is poor. Using urea and spraying chemicals works out to be cheaper for most small growers.

Diversification into related fields is another viable option for small growers. Fabrication of machinery for small tea processing units, import-export, the creation of herbal blends have been successfully tried out by some small growers. Tea tourism is another area of great promise if it is patterned on the homestay model. Cultivation of medicinal plants and fruit production is also remunerative and is desirable because it promotes biodiversity in a tea garden which is otherwise simply monoculture. Citrus fruits, bananas and pineapples do extremely well in the northeast as do herbs like lemon grass, hibiscus and tulsi. Some growers have already abandoned monoculture. Surprisingly, very few have thought about organic vegetable production which has a great potential to generate a supplementary cash income for the grower. Though not a tea grower, Upen Kalita of Udalguri near Guwahati nets a cash income of Rs 40,000 per growing season from the sale of pumpkins and gourds grown on a mere four bighas of land.


In Assam and West Bengal, several small growers who are essentially paddy farmers do not have ownership rights over the land they cultivate. They are thus deprived of access to bank loans which are essential if they wish to expand, set up their own processing unit or go in for organic certification. In the dooars and the terai area of West Bengal several small pineapple growers had gone in for tea plantation in the 1990s eager to cash in on the boom in the tea industry. However, with the slump of 1999 these small growers were compelled to revert to pineapple growing. Growing tea can be risky.

Marketing their teas is another major challenge before the small growers who are processing their own leaf, especially those who are going organic. The rest of the green leaf is sold to a tea factory. John Marbaniang (see box Garage organic) retails his orthodox tea -- high quality loose tea sought by many connoisseurs -- in Shillong and Aizawl. Since production is limited, finding a market has not been a problem. Bhuyan is planning to go in for green tea production soon with a tie-up to an export house based in Kolkata which caters to the European market. The development and production of value-added products such as green tea extract, herbal tea blends and fruit teas are very remunerative. But unless production and certification hurdles are cleared by the small growers, the time and money needed for such products will continue to elude most.

The biggest problem for the majority of the small tea growers of the northeast is negotiating a remunerative price for their green leaf with the large tea factories. In this context, the small Nepali growers of the Darjeeling hills -- about 125 in number have been organised into an ngo called Organic Ekta. They sell their green leaf to the Makaibari tea factory in Kurseong at a fair price. Their combined green leaf production is about 1,000 kg per day. Those processing their own green leaf in small units have to find good buyers or markets for their produce, mostly orthodox or green teas.


Until self-sufficiency is achieved, growers are at a major disadvantage while dealing with the factories they sell their produce to. In Assam, 99 per cent of the small growers sell their leaf to the 200-odd factories in the state.

In the terai area of West Bengal, about 69 of these process the leaf of small growers. ctc tea -- the fine and granular variety that is mostly consumed -- is produced by these factories in Assam and West Bengal. Since a capital investment of around Rs 50 lakh is required for setting up a tea processing factory, these units are totally profit-oriented.

In comparison to the large tea factories, small-scale tea processing units present a totally different picture. Lachit Neog and Hemanga Gohain bought a 9.5 ha tea garden at Amlongchang in central Assam in 2002 and converted it to organic production. It was certified by Skal, Holland, in 2006. Neog and Gohain have set up a small tea processing unit in the garden itself the machinery cost Rs 6 lakh, two gensets cost Rs 2.9 lakh, the building and sheds cost Rs 80,000 and a furnace fired by paddy husk cost Rs 30,000; a grand total of Rs 10 lakh.

This unit is processing about 120 kg of green leaf per day and fine quality orthodox tea, with future plans for producing green tea. There are about 30 such small processing units in Assam. John Marbaniang -- with his 3.6 ha tea plantation -- produces about 1,000 kg of orthodox tea per year.

Even the best of gardens have to be sensitive to issues of labour management. Since the tea industry is labour intensive, good management practices play a big role in the recruitment and retention of labour. In West Bengal and Assam the tea tribes have dominated the scene ever since they were brought to the tea gardens by British planters. There are more problems in the other states of the northeast. In Meghalaya, outside labour is prohibited by law and by local sentiment. Local labour is expensive and erratic but the small growers have little choice in the matter. In Arunachal there is a shortage of tea garden labour since it is difficult to persuade the tea tribes to come and work the gardens in this region.

These small tea growers are certainly better off than the cotton tomato and orange farmers in Maharashtra who have been committing suicide in droves. With an emerging awareness about the benefits of going totally organic, they are perhaps on the brink of a major shift in cultivation practices.

Anjali Pathak is a consultant, working on organic tea and agriculture