When nothing seemed to stop the desertification of the Banni grasslands, a government institution stepped in and showed the people how they can regenerate their land 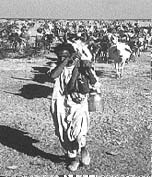 it is known as the Banni grasslands -- the largest grassland of its kind in Asia. But no grass grows here and most years the Jat and Rabari communities living in the area have to face drought-like conditions. This was not what the grasslands were more than a decade ago. The grasslands not only provided fodder to the livestock owned by the people of 52 villages, but also to the cattle from adjoining areas. It was an old practice for people from all over the state and even as far as Mumbai in the neighbouring state of Maharashtra to leave their livestock with the traditional herders of Banni for grazing purposes. The human population was highly outnumbered by the cattle population of 200,000 that was brought to the famed grasslands every year when grass was available in plenty.

Now the saline soil here makes agriculture almost impossible, says Musabhai Nore, sarpanch , Daddar village. Hence, the only source of livelihood for the Banni people is cattle rearing, which they have been practising since time immemorial. When fodder was available in plenty, a herder earned as much as Rs 2,500 a month -- at an average charge of Rs 25 per month per animal -- from people from the neighbouring areas. Some villagers claim that they were paid as much as Rs 50 per animal. "Life was good and we were prosperous," says Jummabhai Raysipotra of Bhrindiara village at the heart of Banni, about 65 km from the historic town of Bhuj.

However, the grasslands gradually began vanishing. The main causes for the depletion are the invasion of Prosopis juliflora ( gando baval ), an increase in soil salinity and overgrazing. "The number of grass species has been reduced to just five from more than 30," says Nore.

Banni accounts for nearly 45 per cent of the permanent pasture and 10 per cent of the grazing ground available in the state, but the loss of grasslands is telling on the human population, which has decreased by 24 per cent, a result of migration. Livestock, too, had reduced by 47 per cent between 1981 to 1992 and those that are left roam around the 3,800 square kilometres of grasslands in search of fodder. With the grasslands gone, the Banni people have lost their only source of sustenance. "People used to come to Banni to graze their cattle, now that has stopped. Further, we are forced to buy fodder for our own herds, that too of inferior quality," says Raysipotra.

Just when everybody, including the people who have lived in this stretch of the Kutch for centuries, had given up hope of rejuvenating the famed grasslands, the Gujarat Institute of Desert Ecology ( guide ) stepped in. In May 1995, the Gujarat Ecology Commission constituted guide to conduct research on the desertification of the Banni grasslands and work on regeneration of the degraded lands. Within the first year itself, guide proved nothing was impossible and that fodder needs could easily be met.

Led by Y D Singh, guide began its work at Bhrindiara, where they took up a 15-hectare (ha) plot for preliminary research and experiment. The first problem that Singh and his team had to face was that of salinity. "Due to the scanty rainfall and construction of six dams, the salinity problem is severe. Freshwater flow into the Banni has stopped, except during heavy monsoons. Therefore, the collection of water from the catchment area fails to reach or leach the salinity of different parts of Banni," says Singh. However, guide refrained from using any artificial methods and, instead, decided to tackle the problem the natural way, depending entirely on rainwater. The research team created long mounds of soil (height 0.5 m, width 3 m) along the plot, while leaving small ditches beside them. Rain showers remove the salinity from the mounds of soil and carry the brine to the ditches. When the experts feel the soil is fit enough, they let grass grow on it.

After the success of Bhrindiara, guide took up a 200-ha plot in Dhordo village. With the help of the Vivekananda Research and Training Institute and guide, the villagers have already been able to reap benefits. At the restoration site 1,75,100 kg of grass was harvested in December 1997. This has been stored in government godowns to be distributed among the villagers in times of crisis.

According to Singh, even if 85 square kilometres of good grass is revived in the Banni area, it will be sufficient for the 10,000-odd human population and the cattle population of 25,000, owned by the local people.

All this would not have been possible without the participation of the local people, says Singh. But convincing the people to join the project was not so easy, especially since guide is a government organisation. "The villagers already had a taste of government projects in the form of dairy co-operatives, which are now lying defunct," says Nore. "Every government project that was started here was riddled with corruption. We never received any benefits," he adds.

So how did guide manage to change the people's outlook? "Instead of sitting in a city and planning things for the people we had never met, we adopted a grassroots approach and involved the local people in the project," says Singh while admitting that initially the task seemed tough. However, some elders like Raysipotra welcomed Singh and convinced the others of guide 's sincerity. Once the villagers joined in, all the work in Bhrindiara was taken up by them. "We appreciate what Singh saheb and his people are doing for us. Nobody had ever tried to involve us in these kinds of projects earlier," says Raysipotra.

To involve the local people and keep them informed about the budget sanctioned and expenditures, guide started a new system in March 1999. The Project Implementing Agency ( pia ), in consultation with the villagers, formed a Village Level Committee ( vlc ). The vlc is responsible for the functioning of the implementing agencies, management of the grass plots and distribution of the harvested grass. Of the total harvested grass, 75 per cent is given to the vlc and 25 per cent is taken against capital investment. The vlc , in turn, decides the price of the grass. The income is deposited in a joint bank account held by the pia and vlc . After three years of this exercise, the plots will be handed over to the vlc s, and thereafter they will take on the management of the plots themselves. Currently, four grass plots of 100 ha each are being developed in the Gorewali, Saniado and Daddar villages. Says Singh: "We are attempting to narrow the gap between the pia and the maldharis (the cattle herders)."

guide has taught the villagers how to be self-sufficient. However, says Singh, "I have told them that we cannot carry on with the work forever. We will give them every kind of support and show them the way. We can be the technical guides. But they will have to carry it on." The villagers who have gathered around Singh are confident they can.