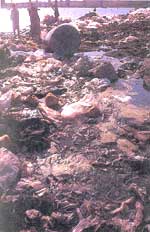 Industrial estates are proliferating in Gujarat and state pollution control officials admit that waste disposal has not been a priority consideration for any of them. The Ahmedabad-Vadodara-Surat industrial belt is packed with over 2,000 units in the organised sector and more than 63,000 smallscale units churning out chemicals like soda ash, dyes, yarns and fertilisers. Besides, the state has 2 other major industrial estates -- Ankaleshwar and Vapi in the Baruch-Valsad belt -- and big industrial settlements like Zanora coming up.

According to the National Productivity Council (NPC), 1,350 industries in Ahmedabad, Baruch, Vadodara, Surat and Valsad districts alone produce 270,000 tonnes of solid waste every year. The waste works in many ways god never intended: the stray animals in the Vatva industrial estate on the outskirts of Ahmedabad are pieces of yelping abstract art: the dogs are splattered with purple, blue or green, coloured when rummaging in the dumpyards all around the estate.

The Nandesari industrial estate near Vadodara is a major production centre for highly toxic chemicals like H-acid and J-acid, which are not easily biodegradable. An inventory of waste at Nandesari, done in 1993 by the Ahmedabad-based Dalal Consultants for the Central Pollution Control Board (CPCB), puts the daily generation of effluents containing solid waste at 120 tonnes, about 70 per cent of which is from industries manufacturing dyes and their intermediates. Industrial sources claim that the total sludge generation in the estate is about 20,000 tonnes per annum, but Dalal Consultants puts the figure at closer to 40,000 tonnes -- extrapolated from the number of tractor loads emptied at the dumpsites every day.

Babubhai Patel, president of the Nandesari industrial estate, estimates that about 25 toxic waste-producing industries generate 1,250 tonnes of waste a day. More realistic assessments, however, put this figure at closer to 4,000 tonnes of dry sludge and about 6,000 tonnes of wet sludge, assuming, generously, that the industries neutralise all of their acidic effluents (which they don't).

In addition, manufacturing processes in Nandesari are inefficient, leading to unnecessarily massive waste of hazardous inputs. For instance, about twice the quantity of sulphuric acid actually needed in the production of H-acid goes down the drain. Technical experts say the industries discharge the bulk of the effluents without even primary treatment.

The story is the same in Gujarat's other industrial clusters. Vapi in Valsad district has around 1,800 units, of which about 450 fall in the category of polluting industries -- 50 paper mills, 60 dye-intermediate producing units, 200 dye industries, 100 pharmaceutical factories, 25 textile dyeing units and about 10 pesticide plants. However, neither the owners nor their association has a clear idea about the total waste generated, let alone safe disposal procedures.

R R Desai, president of the Vapi Industrial Association, admits, "People dump waste anywhere they feel like -- the closer the better." He also says that industries usually dump their waste in low-lying areas within a 2-km radius. As a result, a major illegal dumpyard has sprung up on the banks of the river Daman Ganga.

More than 2 years ago, the GPCB asked the Gujarat Industries Development Corp (GIDC) to identify safe landfill sites. However, 2 sites chosen by the GIDC were unacceptable to the GPCB because they were close to streams. A third site, located about 5 km from the estate, remains undeveloped.

Meanwhile, the Vapi Industrial Association has allowed its members to dump waste on a 0.6-ha plot within the estate. Ironically, the GIDC is upset about this, not because it is unsafe but only because the GIDC had plans to sell the plot to other entrepreneurs.

G B Soni, senior scientific officer at GPCB, insists that "no solid waste -- hazardous or non-hazardous -- can be moved outside factory premises without our permission. Even for storing waste within the premises, our permission is necessary." However, a puzzle that officials like Soni do not care to resolve is what happens to such waste when the state does not have even one designated site for safe disposal.

As an industrialist in Vatva conceded, "If we did not dispose of the waste somewhere, most of the factories would be buried in them by now. The only policy the government has in this regard seems to be one of ignoring this." The torpid policy of turning a blind eye to waste is most evident from the fact that till date, the GPCB has not booked a single case against any industry for the dangerous disposal of solid hazardous waste.