US continues to target India over its intellectual property regime, especially in pharma, green tech sectors 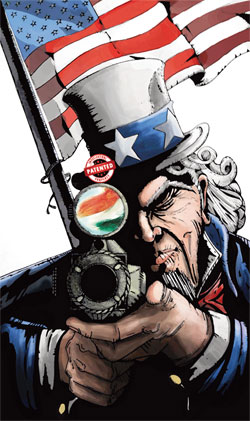 There are clear signs that the US will keep up its pressure on India to tighten its intellectual property (IP) rights laws even if the just-released report of the US Trade Representative did not alter the country’s rating as an IP offender. The annual review, conducted unilaterally by the US to determine which of its trading partners have not come up to scratch in meeting America’s desired level of IP protection and enforcement, contains sharp warnings on what the problem areas are.

Primarily, India’s law on the patenting of pharmaceuticals continues to be the major friction between the two countries, but the other area of irritation for Washington is New Delhi’s approach to green technologies. The USTR report zeroes in on the national manufacturing policy, noting that it promotes the use of compulsory licensing as a way of bringing about technology transfer with respect to green technologies. Under global trade rules, a compulsory licence is a tool that allows countries to legitimately override patents on products in the public interest, but developed countries have always attacked this option.

The US concern is that India has pressed to make this approach on green technologies multilateral through its proposals at the United Nations Framework Convention on Climate Change. “These actions will discourage rather than promote the investment in, and dissemination of, green technologies, including those technologies that contribute to climate change adaptation and mitigation,” complains the USTR’s 2014 review. It also seeks to put a huge burden of guilt on India and other like-minded countries by warning that such policies and practices advanced domestically and in multilateral fora “may have the unintended effect of undermining national and global efforts to address serious environmental challenges”.

The report puts heavy emphasis on the need for strong IP rights to respond to environmental challenges, including climate change. Without such incentives, businesses are reluctant to invest or enter into technology transfer arrangements in countries that lack effective intellectual property rights (IPR) protection and enforcement, it warns. “In the absence of such technologies, society may be deprived of critical advances to meet environmental challenges, including the mitigation of, and adaptation to, climate change.”

The Super 301 report, as the review is titled, was released on April 30 and it kept India on the “priority watch list”, one step below “priority foreign country” or PFC, which is the tag reserved for the worst IP rights offenders. American business and industry lobbies, primarily pharmaceutical manufacturers, had made a concerted pitch to downgrade India to PFC status but that is something the USTR has baulked at, possibly because it could have provoked India to challenge the resulting penalties at the World Trade Organization (WTO).

USTR reviewed 82 trading partners and placed India and nine others, including China, Russia, Argentina and Pakistan on the Priority Watch List. Another 27 are on the Watch List. However, India has been singled out for what is termed an out-of-cycle review (OCR) that will be initiated later this year. As the report explains, OCR is a tool USTR uses to “encourage progress on IPR issues of concern”. It entails “heightened engagement and cooperation with trading partners” to address such issues.

India’s reaction was prompt. Within a day of the report’s release on April 30, Commerce Secretary Rajeev Kher was categorical that India would not cooperate on such a unilateral exercise. Maintaining New Delhi’s steadfast line that its IP rights regime is in line with international commitments, Kher pointed out the OCR was “a unilateral process under their [US] law” and there was no question of India subjecting itself to such a review. “Let that be very clear... India has clearly conveyed to the US that the government of India will not subject itself to investigations,” he said at a press briefing. 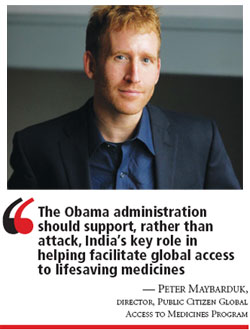 Trade analysts point out that although mechanisms are in place to sort out trade differences, these are not being used. The two countries have set up a trade policy forum expressly for this purpose but no meeting had been convened since 2010 because Washington had not agreed to discuss issues of concern. India had twice suggested convening a meeting of the forum, once in 2011 and then in 2013, just before Prime Minister Manmohan Singh was to visit the US. On both occasions USTR did not agree, ostensibly because it was busy in wide-ranging plurilateral trade negotiations.

All the same, official sources believe there could be a clearing of the air when Kher meets acting deputy USTR Wendy Cutler towards the end of June. India has so far resisted most of the US industry lobby pressures, especially that of PhRMA, the club of drug majors, which went into overdrive against India’s IP regime. The US accounts for 12 per cent of India’s exports and is a major trading partner, but New Delhi has stood firm against the misleading and deceptive propaganda war aimed at overturning crucial safeguards in the patents law (see ‘US piles on the pressure’, Down To Earth, July 16-31, 2013, and ‘Standing up to the US’, Down To Earth, May 1-15 2014).

Two developments—a compulsory licence on a high-priced Bayer cancer medicine that was not being produced in the country and the denial of a patent to Novartis for a new form of an old cancer drug under Section 3d of the Patents Act—were the triggers for the all-out war on India’s patent regime. Ironically, neither of these developments involved US companies—nor could these be challenged at WTO.

There has been sharp criticism of the US position from public health organisations. Peter Maybarduk, director of Public Citizen Global Access to Medicines Program, called the special OCR “a shameful form of harassment”. In a statement on the 2014 Super 301 Report, which he described as “a morally repugnant and unnecessary US government practice”, Maybarduk said the USTR’s assessment “includes lengthy criticism of India that bends much too far to Big Business demands”.

Public Citizen is a Washington non-profit that calls itself the people’s voice on critical issues such as healthcare reform, climate change, etc, as a “countervailing force to corporate power”. It believes USTR annually bullies countries for implementing policies that promote access to lifesaving medicines “despite serious questions about the legality of such unilateral threats under international law”. As such, the 301 watch list should be discontinued. Instead, “the Obama administration should support, rather than attack, India’s key role in helping facilitate global access to lifesaving medicines,” Maybarduk said, since India’s patent system plays by the global rules and promotes public health.

USTR, though, is singing a completely different tune, and on a rather strident note. Against a backdrop of deteriorating IPR protection, enforcement, and market access for persons relying on IPR in a number of trading partners, it reported the following:

There are telling ironies and double standards in the US approach to innovation. On the one hand, the Super 301 report declares that “fostering innovation and creativity is essential to US prosperity, competitiveness, and the support of an estimated 40 million jobs that directly or indirectly rely on IP-intensive industries”. Yet, on the other hand, it admonishes India and China, among others, to be careful while pushing for innovation themselves. These countries should, while formulating policies to promote innovation, take account of “the increasingly cross-border nature of commercial research and development, and of the importance of voluntary and mutually agreed commercial partnerships”.

The Kher-Cutler meeting could perhaps bring some sanity to the discourse.