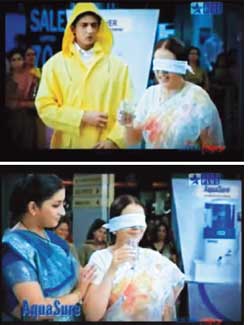 On September 16, Hindustan Unilever (hul) filed a defamation case in the Bombay High Court against Eureka Forbes for its advertisement.

The ad features a blindfolded woman; a man, in a yellow raincoat, hands her a glass of water. The woman spits out the water, saying: eeks! chlorine! It tastes like water in a swimming pool. A television actor then hands the woman a glass of water purified by AquasureEureka Forbes product. The fresh water as exclaimed by the woman, is followed up by a warning: stay away from chemicals such as chlorine. The reference to chlorine is drawn from huls use of the chemical as a disinfectant in Pureit, its water purifier. huls ad campaign features a Pureit executive dressed in a yellow raincoat.

hul demanded the ad be taken off the tube, and filed for damages worth Rs 190 crore.Counsels for Eureka Forbes argued they were merely educating the Indian public on the harmful effects of chlorine. A hul spokesperson countered that there was no residual chlorine in the final output, and at about Rs 2,000, Pureit, with germkill capabilities, had made purifiers more accessible.

Aquasure, priced Rs 2,050 onward, uses bromine for disinfectant. But there is no mention of this in their ad, which shows a more expensive ultraviolet light treatment based purifier instead, which costs Rs 3,990.


Eureka Forbes operates in 500 plus towns and cities in India. hul , a relatively new entrant to the market, in 2004, has a reach of more than three times that of Eureka Forbes. hul plans to double its consumer base by selling two million Pureits in 2010. But the senior vice-president of Eureka Forbes, Marzin Shroff, said his company had a share exceeding 60 per cent of the Rs 1,400 crore water purifier market. The market comprises technologies such as reverse osmosis, ultra violet light treatment and integrated processes using disinfectants. Understanding this market is not simple, said Shroff, and conceeded that hul was the leader in integrated processes in the south.

The main difference in the treatment processes of the two purifiers lies in their germkill processors. Aquasure has a chamber comprising brominated beads, a US-patented technology. The beads release bromine only if there are pathogens in the water, and the bacteria and viruses are killed on contact. If distilled water is passed through the disinfecting cartridge the bromine remains unused, said Shishank Shrivastava of Eureka Forbes.

Trichloro-cyanuric acid (tcca), a form of chlorine used in Pureit, produces 55 per cent cyanuric acid, a disinfectant byproduct, which if combined with the pesticide melamine, may lead to kidney toxicity. But the head of Pureits technical team said the final output does not contain chlorine or cyanuric acid beyond whos prescribed limits.

The controlled release of chlorine ensures that the cyanuric acid content per litre of water is about 4.9 ppm, which is an eighth of whos tolerable daily intake limits (40 ppm), said Vikram Surendra, Pureits technical head. Besides, the final treatment process removes 99 per cent of this residual cyanuric acid, he added.


Disinfection should not be compromised over questions of disinfection byproducts; their chemical risks are minor compared to pathogens, is whos advice. Chlorine had prevented illness or death in millions, and continues to do so, said Michael Rouse, former head of Drinking Water Inspectorate in England and Wales.

Use of disinfectants must be subject to the characteristics of raw water and organic precursors which may result in disinfection byproducts, said Neeta Thacker, scientist at the National Environmental Engineering Research Institute in Nagpur. Two years ago, she submitted a proposal to the Centre to study the germkill abilities of the different domestic water purifiers in India. But the proposal has not yet been approved.

A decision on Pureit v Aquasure is awaited. The ad though continues to be beamed.