Hanging by a thread

Weavers of renowned Ponduru khadi are abandoning the craft

Hanging by a thread 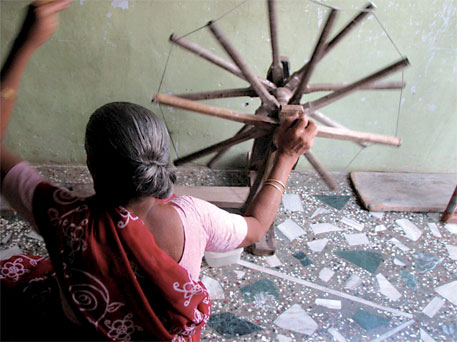 In his house in Ponduru village in Srikakulam district of Andhra Pradesh, M. Ramarao rummages through a large green trunk in search of a forgotten memento. The 75-year-old weaver of fine Khadi received a national award for his craft from the President of India in 2003. Unable to locate the memento after a brief search, his unruffled face does not betray the slightest disappointment. It is just as well that he no longer cares for his award, because Ramarao stopped weaving six years ago. After decades of weaving exquisite fine Khadi angavastrams and sarees as well as plain cloth, the craftsman now helps his nephew in welding work.

The village of Ponduru is renowned for its long, unbroken tradition of making fine Khadi. Women spinners here use two varieties of short-stapled desi cotton: white 'hill' cotton for fine, high quality yarn of up to 105 counts, and 'red' cotton for coarser yarn of up to 40 counts. These indigenous varieties of cotton, which require less inputs for cultivation and are suitable for hand processing, are grown in the vicinity of Ponduru.

The Sali, Padmasali, Pattusali, and Devanga communities are involved in hand spinning and weaving in the area. The Andhra Fine Khadi Karmikabhivruddhi Sangham (AFKKS) in Ponduru, founded in 1949 by the weavers themselves, is now run under the aegis of the Khadi and Village Industries Commission (KVIC). It is the AFKKS which closes the loop between farmers, spinners and weavers in the region. However, with the organisation coming under the bureaucratic control of the KVIC, its very character has changed.

There was a time when Ponduru boasted of a charkha in every house. Even the bank manager’s wife in Ponduru would spin, a handloom academic told me before my visit to the village. An employee of the AFKKS I met claimed that every house still has a charkha. According to him, there are 150 spinners using non-mechanised charkhas in Ponduru, and 60 Khadi weavers in the village. Locals, however, scoff at such claims.

“There are only two spinners residing on my street in Ponduru”, says Chandrasekhar Rao, now retired, who was a Reader in Telugu at the Government Degree College in Srikakulam town. Born in a family of expert weavers in Ponduru, his father discouraged him from following in his footsteps. “There used to be two handlooms in my house, and ten handlooms in other houses on my street”, says Rao. Now his house is bereft of handlooms, and so is his street. “Some people took up teaching, others became chilly merchants.” Ramarao counts only 34 Khadi weavers in Ponduru, down from 45 to 50 in 2003.

Why did Ramarao stop weaving, after perfecting his skill for six decades? When he turned his back on his vocation six years ago, the weaver was earning a meagre Rs 30 a day, after paying two helpers. “The AFKKS only pays weavers”, explains Ramarao. “However, the payment is distributed among the weaver and two helpers without whom fine Khadi weaving is not possible. Besides, members of the weaver’s family also help with ancillary activities, but are not eligible for payment.” The loom is registered in the name of a single weaver who is paid by the Sangham, but others who assist him do not receive any payment because they are not registered as weavers.


Women spinners in Ponduru earn about Rs 30 to craft one hank of yarn measuring 1000 metres. The Sangham believes that they spin only when they are not engaged in housework, which makes their vocation a part-time activity. However, the spinners aver that they work eight hours to produce one hank of yarn, beginning with cleaning and preparing the cotton from scratch. Such low wages are forcing spinners and weavers to abandon their vocation. The younger generation has also turned away from the craft form meticulously practised by their ancestors.

Fifteen kilometres from Ponduru in Nimmalavalasa village in Vizianagaram district, farmer P. Apparao explains the advantages of indigenous hill cotton or Kondapatti over hybrid cotton, locally called Guntur cotton. “Guntur cotton requires pesticides and water every day, whereas hill cotton requires fertiliser, but no pesticides. Besides, Guntur cotton is suitable for machine processing, but breaks during hand processing. Also, hill cotton once planted yields a crop for three years.” All farmers in Apparao's village grow hardy hill cotton; hybrid Guntur cotton is rarely heard of in this area. The AFKKS provides the indigenous hill and red cotton seeds for free to the farmers, who are required to sell their crop back to the Sangham.

The production of fine Ponduru Khadi is no less than an art involving a long sequence of meticulous processes, all performed by human hands, to fashion cotton into cloth. To begin with, the indigenous cotton is cleaned and combed with the jaw bone of the valuga fish in order to straighten out the fibres and remove unusable, shorter fibres. The combed cotton is then pressed and rolled on a wooden plank with a metal rod, each deft stroke removing the seed. The cotton is then fluffed up with a bow in order to separate out the fibres further and align them. Cleaned, ginned, and carded, it is now ready to be rolled into slivers on wooden cylindrical sticks.

Lastly, the slivers are dexterously and painstakingly spun on a charkha to yield yarn, in a process that is entirely enchanting to watch. Weaving the yarn into fine Khadi is achieved through an equally elaborate and fascinating process. However, with the decline in spinning and weaving in this area, the very fate of the craft form now hangs in balance.

V. Varadaraju, who runs an Ayurvedic pharmacy in Srikakulam town, attempted to organise spinners and weavers in the Ponduru area more than a decade ago. “Weavers and spinners are poor, and afraid of losing income if they raise their voice”, he explains. “Besides, most spinners are women, which makes organising them even more difficult.”

Throwing light on the crisis within the KVIC, the former social worker emphasises a few key points. “All Khadi organisations in the KVIC are in the hands of people who know English. The KVIC does not appoint skilled artisans as officials. How can an IAS officer in a city understand the complexity of the issues in Khadi? The direct link between artisans and consumers was in effect sundered by the advent of Khadi societies which also fell prey to corruption. The KVIC pours money into rebates for Khadi, instead of changing the policies which are destroying the craft and pauperising artisans.”

Apart from marketing and technological inputs, and much needed minimum wages for the artisans, the crux of the matter perhaps lies in the economics of growing  cotton. According to P.D.K. Rao who founded a social service organisation called Shodhana in nearby Chipurupalli town, and has travelled extensively around Ponduru, “Small farmers near Ponduru cannot grow cotton at a cheap rate. Without quality cotton, manufacture of Khadi in Ponduru is not possible. The AFKKS is supplying Guntur cotton to spinners along with hill and red cotton, and peddling cloth woven from yarn produced on mechanised Ambar charkhas as hand-woven, hand-spun Ponduru Khadi.” P.D.K. Rao believes that the Government should provide indigenous cotton at highly subsidised rates to spinners to rescue Ponduru Khadi from its current predicament.

Tragically, despite the existence of a good market for Ponduru Khadi, this ancient craft form which survived the colonial onslaught now faces an uncertain future. Without a transformative approach to the very policies that are at the heart of the matter, it might very well be that the charkha will no longer ply in Ponduru in the years to come.