Has lifting subsidies depressed fertiliser use?

A survey reveals that while using fertilisers, farmers are seldom guided by their price alone.

Has lifting subsidies depressed fertiliser use? 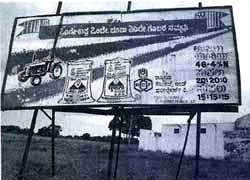 DO PRICES determine increase in use of fertilisers, which are heavily subsidised by the government, in India? Fifty-six-year-old Madhusudan Reddy, who owns 50 ha in Chaganur village in Karnataka's Bellary district, disagrees.

"I use the same quantity of fertilisers I did before the government increased their prices two years ago," he says, referring to the Union government's policy since 1991 of drastic cuts in fertiliser subsidies. Reddy is among the 197 agriculturists from three villages in the districts of Bellary and Dharwar surveyed by researchers of the Indian Institute of Social and Economic Change (ISEC) in Bangalore.

Supporters of the removal-of-subsidies move have argued the new policy will promote efficient use of fertilisers and check environmental degradation as farmers earlier used more fertilisers than necessary. But the farm lobby led by organisations like the Bharatiya Kisan Union in Uttar Pradesh and the Karnataka Rajya Raitha Sangha in Karnataka argues that crop yields will fall sharply because farmers wouldn't be able to afford fertilisers at the unsubsidised prices.


But the ISEC survey reveals that when using fertilisers, farmers are influenced by factors other than high prices. The ISEC team chose three villages: Ganikanahal, which is highly irrigated, Chaganur, partly irrigated, and Huilgol, which is 'dry'. Ganikanahal and Chaganur, which have better irrigation facilities, consume more fertilisers than Huilgol partly because they widely cultivate high-yielding varieties of crops. The rise in fertiliser prices has hardly affected rich farmers. Medium farmers of the area, who own 1-5 ha, are equally determined not to curb their use of fertilisers. The feeling is reflected by 45-year-old Kashanna of Chaganur, who owns 3.65 ha. "We cannot reduce fertiliser consumption because it would lower production. Then I wouldn't be able to support my family of 12," he says.

More than the price, availability of water influenced fertiliser use. In Chaganur, where water supply from the Tungabhadra project has been irregular in the past two years, a marginal farmer, Sheikh Saheb, explained, "If I had continued to use as much fertiliser as in the past, the lack of water would have burnt my crops." Indeed, even richer farmers are uneasy because of the irregular availability of water. Said Reddy, "Any water scarcity would make me invest heavily in wells. Rises in fertiliser prices don't worry me as much."

The impact of fertiliser prices has been more diverse on the small and marginal farmers of the three villages. Sannadeva Reddy, who cultivates about 0.75 ha in Chaganur, argues that "high production yields through sustained fertiliser use would be the only way I could pay back my debts to the local moneylenders".

The study points out that despite subsidies, many small and marginal farmers have never used chemical fertilisers, especially in the dry villages. But in irrigated villages, several small and marginal farmers associate high yields only with synthetic fertilisers. Hardly any of them have used organic manures as they anticipate lower levels of production from organic farming.