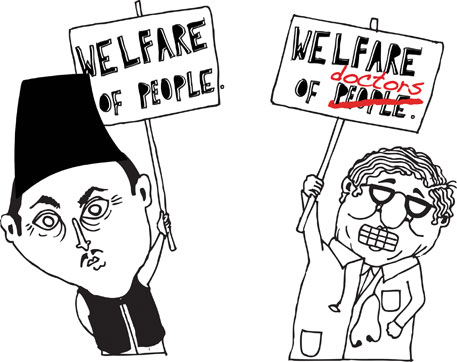 After expressing resentment over the Centre’s efforts to regulate medical education, doctors are now up in arms against its move to regulate clinical establishments that are flourishing without any accountability. The Indian Medical Association (IMA), the largest body of doctors in the country, is threatening to sue several state governments if they enforce the Clinical Establishments (Registration and Regulation) Act of 2010, a Central Act.

The Union health ministry and public health activists say IMA’s opposition is baseless. “IMA only works for the interests of doctors,” says Kunal Saha of People for Better Treatment, a Kolkata-based association of doctors against medical negligence. “Some doctors oppose the Act as they see their interest getting hampered with its enforcement.”

Enacted in March, the Act aims to ensure quality treatment to all by bringing all private and government hospitals, clinics and diagnostic labs under an umbrella body, the National Council for Clinical Establishments. Its prime goals are to cap the cost of medical procedures and ensure emergency care.

Since health is a state subject, states will have to pass a resolution to implement the Act. So far, Sikkim, Mizoram, Arunachal Pradesh, Himachal Pradesh, Uttar Pradesh, Rajasthan and Jharkhand have adopted it. In most other states, IMA is dissuading governments from doing so. While IMA-Tamil Nadu has successfully persuaded the state government not to go ahead with the Act, Punjab and Delhi branches of IMA have threatened to move court if the governments adopt the Act.

The major concern of IMA, which held a countrywide protest on June 26, is that the Act will lead to closure of most single-doctor clinics. “Private doctors cater to patients even in rural areas. They cannot meet the high quality standards set by the Act,” says Jayalal, secretary of IMA-Chennai. “The Act only encourages corporate hospitals.”

Vinay Lazarus, director (administration) at G M Modi Hospital in Delhi, says meeting quality standards set in the Act should not be a problem for most big hospitals in cities as they strictly follow treatment protocols. Though, he admits, multi-speciality hospitals are sceptical about capping the cost of medical procedures.

Another bone of contention is the clause on emergency, which makes it mandatory for all clinical establishments to provide treatment to patients in case of an emergency, irrespective of whether they can pay for it. The clause, the government says, will help save the lives of several accident patients and pregnant women. “How can a gynaecologist offer emergency care to a patient with cardiac arrest?” asks Harish Gupta, president of IMA-Delhi. If each clinic sets up emergency care equipment, its expenditure will shoot up, he adds.

Despite opposition, the Union health ministry is geared to put the Act in motion. It is preparing treatment guidelines for various streams of medicine. The guidelines will also specify the price range for each medical procedure. No doctor or hospital can charge more than what is prescribed in the guidelines.

“The guidelines will be ready by the year end and will be integrated with the National Rural Health Mission by next year,” says A K Panda, joint secretary with the health ministry. Citing the need for the Act, Panda says, no one knows how clinical establishments treat and on what basis they charge exorbitant fees. If a doctor wants to set up a clinic, all he has to do is inform the municipal authorities, he adds. “Though 12 states have laws to register clinical establishments, they are obsolete and hardly implemented,” says V P Singh, deputy secretary with the ministry. Assuring that no clinics will be shut, he says, the focus for the first two years will be on collecting data through state- and district-level councils. Eventually, they will follow the standards set by the national council.