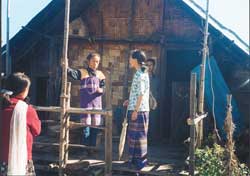 Arunachal Pradesh, though one of the less explored areas in India, is known for its breathtaking natural beauty, distinctive culture and tradition, as also its abundant natural resources. This inspiring beauty is, however, blemished by many inequities, not least of which is the sorry state of the women here. The women do more than their fair share of the work, but get nowhere close to claiming the dignity or respect that is due to them.

Future Generations Arunachal Pradesh (fga) intends to change that. fga has been playing a crucial role in improving the social status and health of women since it was set up in 1997. It currently works in 22 remote villages of the state, with a membership that varies from local communities to forest officers, doctors and nurses. The executive director, based in Itanagar, coordinates activities and distributes responsibilities to voluntary workers at the village level.

fga has come up with an innovative system they call seed, or self-evaluation for effective decision making, survey. Communities in every village prioritise their needs. Based on this prioritisation, an action plan for the following year is charted out. seed enables communities to understand their social and environmental situation and moves them into active participation. The most important issues that came up after the survey are health, conservation of forests and education. Once these needs are identified, the fga ties up with the local communities in organising medical camps, adult education classes, latrine construction and various other services.

However, the fga was faced with a daunting task. The women of Arunachal Pradesh had very little time to consider their own health or affairs. Kago Yam of village Ziro says, "We work from dawn to dusk and our hands are rougher than that of our husbands, but we take it in our stride." This is where fga saw the aspect of health and conservation blending. The women face an additional burden due to the increasing distance between the forest and the villages.

"These days we have to walk around five to seven kms to collect firewood from the forests," says Hibu Yassing from Siro village. These difficult circumstances pose numerous health problems for the women. Yassing is one such victim, who frequently complains of pain in the calves and backache. "Backache, muscle pain and stomach ailments are the most common complaints among the women here," says Kago Kena, a local nurse in the health department.

Yet another problem the fga is faced with: most women continue their strenuous work well into the last days of pregnancy. Miscarriage and stillbirth are common problems among the women here. "These women take no rest after childbirth, and are back in the fields soon after delivery," says S Kak-oty, medical superintendent of Ziro.

"The men of these communities mostly carry out the hard labour, roam around the whole day and when they return home by evening, expect the women to have their oh (local rice beer) ready and served to them," says Punyo Chada, a local school teacher. Little wonder then that liver cancer is so common among the men, says Kakoty.

Village welfare workers (vww) constituted at the village or site level are trained in primary health care. "We learn to treat minor ailments like diarrhoea and fever and detect high blood pressure," says Takhi Oniya, a member of the vww. "Married women with leadership qualities, who show a natural interest in social work, are selected for the training," says Amit Sharma, a member of the fga.

The vwws conduct a monthly door-to-door survey on the prevalent ailments, the results of which are tabulated at the head office in Itanagar. Many feel these figures are more reliable than that of the primary health centre because every house in the site is approached.

The fga is aware of the daunting task that lies ahead. However, they plod on, encouraged by the dent their efforts have made.