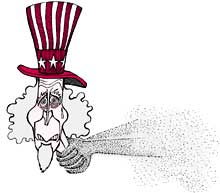 Aus report on household dust reveals harmful chemicals leach from everyday products assumed innocuous. Young children are particularly at risk, yet the chemicals are legal. The industry seems to be fobbing off these chemicals on people only for profits, alleges the report released recently.

Called Sick of Dust: Chemicals in Common Products -- A Needless Health Risk in Our Homes , the report is based on a study conducted by Clean Production Action (cpa), a us -based non-governmental organisation (ngo) along with other ngos. Dust samples were collected from vacuum bags in 10 homes in each of the seven states studied -- California, Maine, Massachusetts, Michigan, New York, Oregon and Washington. One composite sample was made from the 10 samples collected for each state. Each sample was then tested for the presence of 44 toxic chemicals belonging to six categories and found in common household products such as detergents, cosmetics and toys (see table: Living with poisons). The results showed that 35 of the 44 chemicals were present in at least one sample.
"The study is a reliable evaluation of what is in the dust. But it does not tell us how much of these materials are inhaled," comments Peter Orris, director, Occupational Health Services Institute, University of Illinois at Chicago, usa. However, even small amounts of these chemicals inhaled or ingested may prove harmful.

The adverse effects of several commonly used chemicals have been documented decades ago. For example, it was known as early as 1975 that fumes from hot pans coated with Teflon can kill pet birds. Why are these toxic substances still in circulation? Because of lack of legislation, says the report. As per the us Toxics Substance Control Act, the chemicals that have been marketed prior to 1979 are considered safe until proven otherwise. But these make up more than 99 per cent of the commonly used chemicals.

"Manufacturers and retailers need to stop using toxic chemicals which are building up in our bodies and switch to safer alternatives which are readily available," says Beverley Thorpe, international director of cpa. Safer alternatives are available for most, if not all, chemicals. But the Consumer Product Safety Commission that regulates products "has a dismal record of considering chronic long-term health effects resulting from exposure to chemicals from products. They are more focused on injuries and acute poisonings," says Ted Schettler, science director of the us -based ngo, Science and Environmental Health Network.

cpa suggests an overhaul of regulations on chemicals using Europe as an example. Europe's new draft chemicals management programme, entitled Registration, Evaluation and Authorisation of Chemicals (reach), is set for enactment in a year or two. reach would require industry to publicly provide basic health, safety and environmental impact data on all chemicals, both new and old. Industry also will partly pay for reach through registration fees.

According to the European Commission, reach would save an estimated 50 billion Euros in health benefits over the next 30 years and prevent as many as 4,300 cases of cancer.

However, instead of endorsing reach, the American Chemistry Council (acc) and the Bush Administration are lobbying against it, alleges the report. Because of reach, acc predicts billions of dollars will be lost in us sales of these chemicals to Europe . O bviously, for the us government, monetary profits seem to be a bigger concern than health.