Growth by leaps and bounds

Growth by leaps and bounds 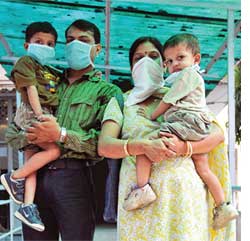 For 2007-08 and 2008-09, the increase in premium collected by 12 major private insurance providers in the country was 23 per cent. The four public sector companies registered a premium growth of about 20 per cent for the same period. When it comes to profits, private companies dont want to reveal the figures. According to media reports in early 2009, Star Health Insurance, a private health insurance company, hoped to earn a profit of Rs 6 crore for 2008-09.


There are different views on this. It is too early to judge whether private insurance companies have decreased the cost of healthcare because the reach of insurance is still low, said Shobha Mishra Ghosh, director, ficci. At present, health insurance covers about 3 per cent of Indias population.

Umesh Kandpal of Max Healthcare said insurance had lowered peoples expenditure on health from 90 per cent to 78-80 per cent in the past five years. This figure though is just for Max Healthcare.


In India, Insurance in the health sector was introduced because the public healthcare system did not have sufficient funds and hence, was unable to meet the healthcare needs of the country. Lack of doctors and medicines have always been common problems in public healthcare facilities.

A 2007 report by McKinsey, management consultants in the US, estimated that people would spend around 60-65 per cent of the total health expenditure on their own at private healthcare facilities.

Under the 11th Five Year Plan, the amount of money spent was less than 1 per cent of the countrys gdp. Since health is a state subject, every state budgets for healthcare separately. But there is never enough because when the Centre increases its allocation, the state conveniently reduces its own budget.

Such problems in public healthcare made way for private health players. But they could not make profits because people could not afford it. This paved the entry for insurance, with the idea of creating a pool of money where the healthy could subsidize the care for the sick.


In India, insurance started with the Employment State Guarantee Scheme in 1948. The scheme covered healthcare and insured people against loss of wage due to illness. Then, more than 100 private Indian companies entered the market. In 1972, the insurance industry was nationalized and the existing insurance companies were brought under the General Insurance Corporation. Four companies provided health insurance.

Post liberalization, the Insurance Regulatory and Development Act (irda) was passed in December 1999, which allowed foreign insurance companies to collaborate with private companies in India.

But this collaboration did not come easy. The irda was passed after much debate in Parliament. The Left parties were opposed to opening up the sector to private players; the Congress supported it, and bjp supported just the entry of Indian private players.

Employees of insurance companies demonstrated that the bill was against the interests of the country. Ajoy Chakraborty of cpi(m) called it an infringement on the economic sovereignty of the country in a debate in the Lok Sabha in November 1999.

Chakraborty suggested that the proposed bill should be referred to a select committee for reconsideration, and pointed out that the public insurance companies were more competent and efficient than US multinationals.

Despite the opposition, irda was passed. And now, most private companies are collaborations.

icici Lombard General Insurance Company Ltd is a joint venture between icici Bank Limited and Fairfax Financial Holdings Ltd in Canada; Bajaj Allianz is a collaboration between Allianz SE of Germany and Bajaj Finserv Limited; and iffco Tokyo is a joint venture between the Indian Farmers Fertilizer Co-operative and Tokyo Marine and Nichido Fire Group, the largest insurance group in Japan.