Pickle, tea and a spice

Pickle, tea and a spice

The many faces of Himalayan herb bhangjeera

Traditional medicine practitioners of eastern Asia know about this spice. People of Garhwal in Uttarakhand have many uses for the leaves and seeds of this plant grown in the upper reaches of Himalaya. But gourmets are yet to discover it.

The aroma of bhangjeera chutney and bhangjeera tea fills the air as one travels through the hilly terrain of Uttarakhand's Garhwal region, especially in winter. Its popularity is evident at local dhabas and classy eateries alike.

The name can be misleading, but unlike bhang, a Cannabis extract, bhangjeera or beefsteak plant (Perilla frutescense) does not alter the state of mind.

Till two decades ago, it was extensively cultivated between the altitudes of 1,000 metres and 2,500 metres in the Himalayan region. The crop grew in abundance in the valleys of Kedarnath, Pinder, Urgam and Niti.Farmers in lower altitudes, who mostly cultivate potato and rice, grew it on field bunds or as a mixed crop with moong lentils, amaranth grain or finger millet.

Its aromatic seeds are used as a spice and to prepare flavoured chutney. Oil extracted from the seeds is used in cooking or as a medicine. "We prefer using bhangjeera seed oil for massaging newborns," said Meena Dhyani, a resident of Garhwal. The oil is known to be rich in omega 3, an essential fatty acid. "Roasted bhangjeera seeds blended with roasted proso millet offers nourishment to those suffering from jaundice and measles," Dhyani said. She also said old timers in Garhwali villages prefer the oil for pickles.

The large red bhangjeera leaves used to be a regular feature of Garhwali cuisine. Sharp in taste, it belongs to the mint family. Its sweet leaves are preferred for seasoning. Added to fish, rice, vegetables or even soups, they are cooked as potherbs or stir-fried. Most common is bhangjeera's use in tea. Freshly picked tender leaves are added to boiling water while making tea. People in Garhwal store dried bhangjeera leaves to use it all the year round.

According to American botanist James Duke's Handbook of Medicinal Herbs, bhangjeera leaf is a rich source of vitamin C that prevents common cold.

It also has other vitamins such as beta-carotene, niacin, riboflavin and thiamin. One of the organic compounds found in the plant is 2,000 times sweeter than sugar. An infusion of the leaves is useful in the treatment of cold, cough, asthma, lung infection, constipation, food poisoning and allergies from seafood. It also helps prevent influenza and brings relief from nausea. 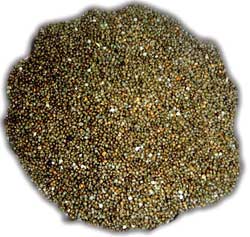 Because of these therapeutic properties, the plant is widely used in traditional medicine in China, Japan, Korea and Thailand. In China, bhangjeera seed oil has been used in paints, varnishes, linoleum, printing ink and for waterproof coatings on cloth. The oil is also used in the perfume industry and in aroma therapy. Crushed leaves of the plant works as an insecticide.

But the aroma of bhangjeera is losing its essence among Garhwalis. A handful of farmers cultivates the spice, that too in small quantities; it does not reach the market.

Gourmets better act fast before bhangjeera disappears from the slopes of Garhwal.