Poultry farms are reservoirs of multi-drug resistant bacteria and play a major role in their spread, shows the latest CSE study

How the deadly spread is taking place

Poultry farms in India use antibiotics—not only to cure their chicken from diseases but also to help them gain weight and prevent diseases. The practice is common in the sector which has been growing at a steady pace of 10 per cent per year the past decade. Chand Singh, owner of a broiler poultry farm in Haryana’s Kawi village, says he regularly gives birds a combination of two antibiotics—enrocin and colistin. Ramchander, owner of another broiler farm in Sanpka village, some 150 km from Kawi, says he uses cipro floxacin and enrofloxacin antibiotics.

This reckless practice could be responsible for the emergence of antibiotic resistant bacteria, which can survive an antibiotic that would normally kill them or stop their growth. A recent study by Delhi-based non-profit Centre for Science and Environment (CSE) highlights the high prevalence of antibiotic resistance (ABR) in the poultry environment. Worse, the study findings suggest that ABR is also spreading beyond the poultry farms because untreated litter is commonly used as manure in nearby agricultural farms.

“On the one hand, antibiotic misuse is common in the poultry sector and on the other, the sector is plagued with poor waste management. The two are responsible for the emergence of ABR in poultry farms and its spread into the surrounding environment. We decided to conduct the study to understand the level of and spread of ABR in and around broiler poultry farms,” says Chandra Bhushan, deputy director-general, CSE. Worryingly, the study found some of the bacteria to be resistant to antibiotics that are normally used in hospitals as the last resort to fight infections.

The findings should serve as a wake-up call for the government as India at present does not have adequate laws to contain ABR. Even the guidelines of the Central Pollution Control Board (CPCB) on poultry waste management do not adequately address ABR. This is despite the fact that several studies over the past years have pointed towards misuse of antibiotics in humans as well as animals, and the emergence of ABR. In 2014, a study by CSE had also found residues of multiple antibiotics, such as fluoroquinolones (enrofloxacin and cipro floxacin) and tetracyclines (oxytetracycline, chlorte-tracycline, doxycycline) in chicken meat samples because of rampant use of antibiotics in poultry.

The latest study covers broiler farms in four key poultry meat-producing states—Uttar Pradesh, Rajasthan, Haryana and Punjab—which collectively contribute about 40 per cent of total poultry meat production in India. CSE researchers collected a total of 47 samples: 35 from 12 poultry farms and 12 control soil samples from areas where poultry litter was not used as manure. The poultry farms were randomly selected from different clusters (a village with at least three broiler farms) and had an operational size of 3,000 to 21,000 birds. Antibiotics were used in all the selected farms. CSE’s pollution monitoring lab collected three samples from each farm—poultry litter from inside the shed, soil from outside the shed and soil from an agricultural land outside the farm where poultry litter was used as manure. Agricultural soil sample could not be collected from Jaipur cluster. 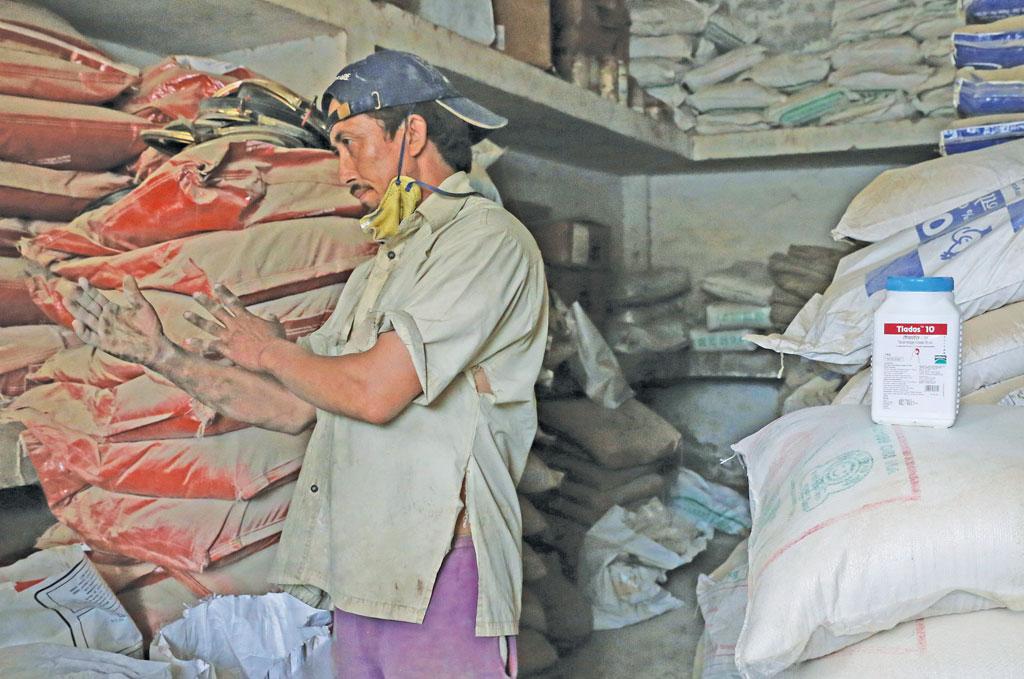 E. coli and K. pneumoniae strains cause meningitis, urinary tract infections and respiratory illnesses, such as pneumonia. Patients in hospitals are also at high risk of contracting K. pneumoniae infections because of their low immunity.

After isolating the bacteria, they were tested individually against 16 antibiotics belonging to 13 antibiotic classes, which were selected on the basis of their extent of use in poultry and importance to humans. Ten of the antibiotics belong to the World Health Organization’s (WHO) critically important classes (CI) for human medicine. The study did not test E. coli and K. pneumoniae isolates for resistance against three of the 16 antibiotics.

The study not only establishes that poultry farms are reservoirs of ABR, it also shows that ABR is moving out of the farms to neighbouring areas (see ‘Spread out’, p21). It found a similar resistance pattern in the E. coli isolates collected from poultry litter and agricultural soil where the untreated litter was used as manure. For instance, 100 per cent E. coli isolates from both sources were resistant to meropenem, a CI antibiotic that hospitals use as the last resort to contain bacterial infections. E. coli isolates from litter and agricultural soil also had similar high (>70 per cent) resistance against antibiotics of three more CI classes—penicillins, fluoroquinolones and 3rd and 4th generation cephalosporins.

In K. pneumoniae, isolates from poultry litter samples had high ABR to CI antibiotic classes, such as penicillins, fluoroquinolones, carbapenems and 3rd and 4th generation cephalosporins. ABR in these isolates from agricultural soil showed slightly lower resistance against these antibiotic classes. About 90 per cent of K. pneumoniae isolates from both litter and agricultural soil was resistant to amoxyclav antibiotic. However, a strong statistical correlation between the resistance patterns from these two sources was not observed.

Similarly, in the case of S. lentus, all isolates showed high resistance to two antibiotics. Overall, the resistance pattern of the litter isolates and agricultural soil isolates of S. lentus were not statistically comparable.

In the control soil samples, no isolates of E. coli was found. Only a few isolates of K. pneumoniae could be obtained and S. lentus was most common. In both, the overall resistance levels observed were high, but of statistically different pattern to what was found in agricultural soil.

The results of the study establish that multi-drug resistance is moving from poultry farms to agricultural land in the case of E. coli. However, more studies are required to understand the behaviour of K. pneumoniae and S. lentus in view of different sources of bacteria, such as other animals and use of synthetic fertiliser and pesticides in agricultural fields.

The CSE study findings are already visible on the ground. A government veterinary doctor from Jind, a district in Haryana that was covered under the study, said they have stopped administering enrofloxacin, a fluoroquinolone antibiotic, because it is no longer effective in the area. “We instead prescribe antibiotics, such as neomycin, doxycycline and levofloxacin,” says the doctor. Requesting anonymity, he says the high antibiotic misuse in poultry farms is responsible for ABR in the area.

Abdul Ghafur, a consultant on infectious diseases at the Apollo Hospital, Chennai, says that resistant bacteria from poultry farms can directly infect farmers and meat handlers or indirectly put humans at risk through agricultural produce and waterbodies. Moreover, the antibiotics against which a high degree of resistance was observed in the three bacteria CSE tested, are losing effectiveness at a speed greater than anticipated. “About 5-10 per cent of Indians have carbapenem-resistant bacteria in their body. This increases to 30-40 per cent in hospitals. Due to this growing resistance, colistin use is becoming a regular practice. After this, there are no antibiotics,” he says. High resistance observed in humans in E. coli and K. pneumoniae has prompted WHO to identify them as “priority pathogens” to develop new antibiotics for them.

Several papers clearly establish the growing incidence of ABR and the role of antibiotic misuse in rearing food animals. A policy paper, Antibiotics in manure and soil—A grave threat to human and animal health, published by the National Academy of Agricultural Sciences in 2010 recognises the passage of antibiotics into soil and food chain beacuse of its use in food animal production. 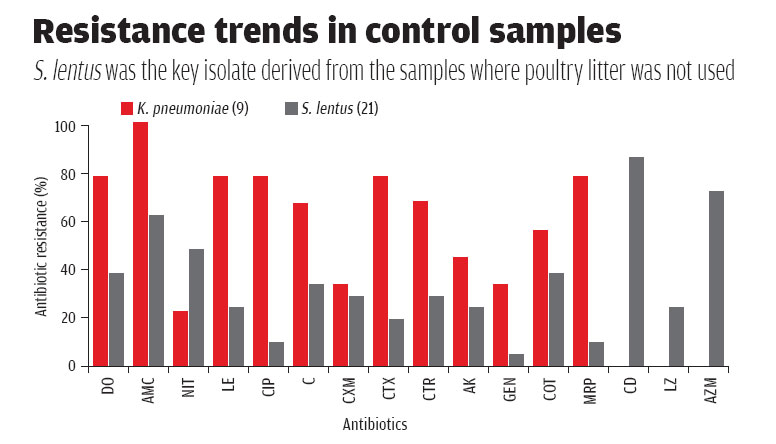 In July 2017, Environmental Health Perspectives published a study which looked at 18 poultry farms in Punjab and found a link between antibiotic use in poultry farms and ABR. The study highlighted high prevalence of multi-drug resistant E. coli strains from cloacal swab samples of birds in broiler farms. Even a WHO Advisory Group on Integrated Surveillance of Antimicrobial Resistance project in North India (2014-2017) found ABR in isolates of food-borne bacteria from humans and animals. “Overall, very high level of resistance was observed towards fluoroquinolones, tetra cyclines, aminoglycosides, which are com monly used in animal farms,” says Neelam Taneja, professor, Department of Medical Microbiology, Postgraduate Institute of Medical Education and Research, who was part of the project.

There is also growing evidence that increased antibiotic use in poultry creates reservoirs of resistance genes that can be transferred to other pathogens through a phenomenon called horizontal gene transfer. This means resistance in one bacterium can be passed on to other kinds of bacteria, even for multiple antibiotics. An August 2017 study, published in the Applied and Environmental Microbiology, found ABR genes from bacteria in soil that was exposed to antibiotics used in human medicine or food animal production for about 16 years.

Despite the worrying trends, the sector continues to use antibiotics. A research on the global trends in antimicrobial use in food animals published in 2015 in the Proceedings of the National Academy of Sciences states that the use of antimicrobials, which includes antibacterials, in livestock in India, Brazil, Russia, China and South Africa is expected to increase by 99 per cent between 2010 and 2030. India’s contribution in the 2030 projections could be significant due to growing farm intensification and limited regulatory control.

India has so far focused on combating ABR due to antibiotic misuse in humans. The Union Ministry of Environment, Forest and Climate Change (MoEF&CC) places poultry and hatchery in the green or low pollution potential category in its polluting industries list. Also, CPCB guidelines on waste from poultry farms do not focus on ABR. This is despite the fact that India is among the top producers of fish, poultry and dairy, and the environment contribution of ABR through waste could be significant. The quantum of litter produced by about 800 million poultry population indicates towards the huge scale of the problem. Another challenge for the country is the tropical climate and poor sanitary conditions that result in high incidence of infections, which in turn, increases the chances of antibiotic use and ABR.

While the action plan is a step in the right direction, India needs concrete measures to be able to contain ABR due to antibiotic misuse in rearing food animals. The first critical step should be that the Department of Animal Husbandry, Dairying and Fisheries regulate to limit the non-therapeutic use of antibiotics in poultry. The department should also adopt alternatives to antibiotics and implement bio-security measures. It should also ban the use of poultry litter as feed for aquaculture.

The sector requires ABR-centric environmental regulations, which can happen through a greater role by MoEF&CC and CPCB. The Union ministry should ensure that poultry sector waste is considered as an important ABR contributor. Meanwhile, CPCB, along with state pollution control boards, should prohibit the use of untreated poultry litter as manure and ensure the adoption of waste to energy measures such as biogas generation because they are a less risky manure management option than composting. The CSE study recommends biogas generation for big and integrated players and that it should be made mandatory for acquiring poultry farm licences. The study also suggests a nationwide programme to promote community biogas generation plants for small poultry farmers in clusters. It also says that farms where composting is the only option, it should be done under supervision through adequate laws on process validation and site-approval. The study says that CPCB has to strengthen its existing guidelines and notify them.

Lastly, the government should invest in research to better understand the impact of manure treatment on ABR and resistance transfer mechanisms.

Poultry litter is the culprit 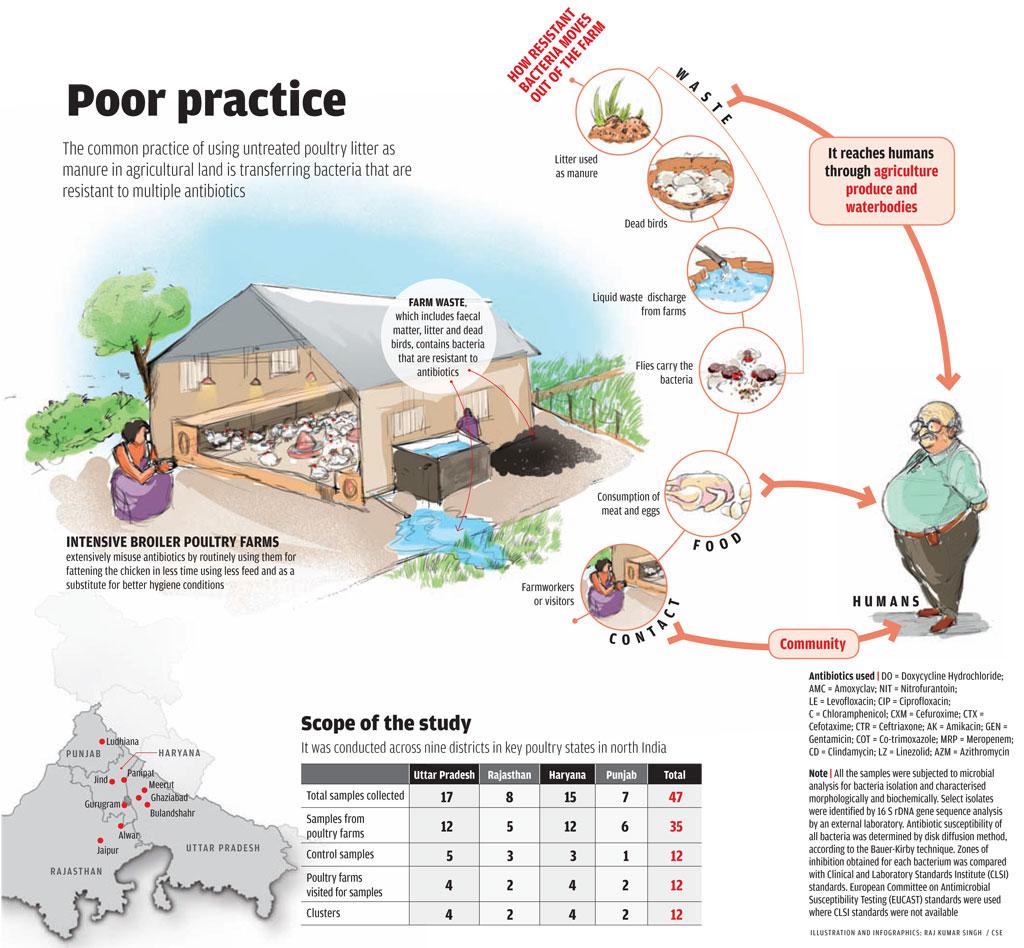 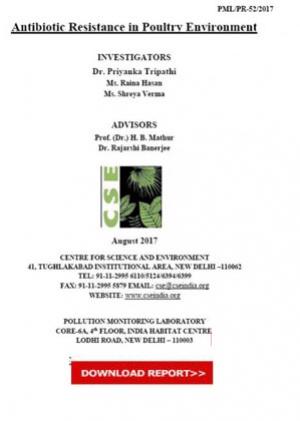 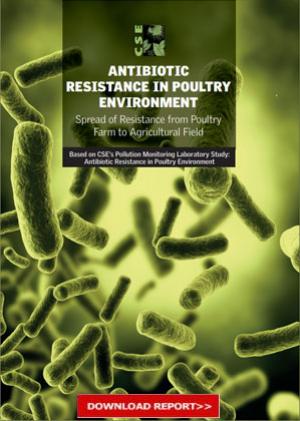