Gujarat industrialists are building a site to dump toxic wastes in Nandesari. The plans of the landfill, however, are severely flawed and it could soon lead to a major ecological disaster in the state. MANISH TIWARi reports from Vacloclara 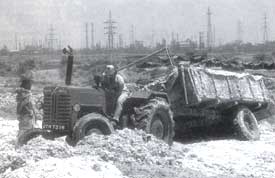 1965. The Gujarat Industrial Development Corporation (GIDC) embarks on an ambitious plan to set up a sprawling industrial area, the Nandesari Industrial Estate (NIE), in Nandesari, north of Vadodara, Gujarat. The GIDC promises huge earnings, job opportunities and numerous other benefits to the farmers' and residents of the area once NIE becomes functional.

1998. While NIE is home to some 267-odd industrial units, the people and the land of Nandesari are in dire straits. Most of the NIE units manufacture industrial chemicals, including hazardous ones like H-acid, venyl sulphone, nitric acid and dyes intermediates. Some even produce toxic wastes such as cyanide and arsenic. When GIDC planned Nandesari, it forgot to incorporate a waste disposal system for its industries. Result: for more than three decades, NIE units have dumped their toxic wastes anywhere they wanted. The national highway that bisects Nandesari resembles a massive dumpsite today, with factory waste piled high on either side and effluents spilling everywhere. Soil quality, the quality of groundwater and air have gone from bad to worse. The land, impregnated with industrial chemicals containing heavy metals, have lost their productivity. And with concentration of lead, in the groundwater almost 750 times higher than the prescribed limit at some places, Nandesari today is an example of government's apathy, poor planning and complete lack of foresight. Unwilling to invest in expensive waste treatment facilities, the NIE units have chosen the easy way out. Trucks, laden with waste, roll out of the factories at the dead of night and dump their toxic cargo along the roadside. Police intervention has proved futile. The units have always found ways to hoodwink the law enforcement personnel and dumping has continued, unabated.

Ideally, each NIE unit should be equipped to treat the waste it generates to a certain extent. This is usually referred to as primary treatment. After primary treatment, the waste should be forwarded to the common effluent treatment plant (CFTP) where it is rendered harmless through secondary treatment processes and then disposed of. This is mandatory in the West, where dumping hazardous wastes entails serious legal and financial penalties. But not so in Nandesari, where primary treatment of industrial wastes is non-existent and the CETP that does exist is illequipped. Further, of the 267 units, only some send their effluents for secondary treatment. "We treat effluents such as chemical oxygen demand (COD), cyanide, chloride and total dissolved solids," says an ETP chemist. "But whenever we find that the effluents have not undergone primary treatment, we do not allow their treatment here," he adds. Rejected by the CETP, these end up in one of the many waste dumps strewn all over the region, he says. "Only 80 units send their effluents here. The rest simply dump theirs anywhere."

The first complaints against NIE units surfaced in 1982, when the local residents took up the issue with concerned officials. Consequently, the state government set up an investigative committee to assess the situation. One chemical company, Prathwanath, was relocated while 40 others faced bans. But such steps proved unsuccessful. The units soon reverted to their old 'dump- waste- anywhere' tactics.

After years of suffering, the people of Nandesari welcomed the formation of Nandesari Environment Control Limited (NECL), to manage to waste generated by NIA. The firm was floated by the Nandesari Industrial Association (NIA), a body that represents the NIE units. The GIDC even identified a dumpsite where common solid waste could be disposed of safely. According to the proposed plan, NECL would collect nearly 12,300 tonnes of solid wastes annually from about 72 industries and manage it for the next 12 years. The people of Nandesari thought their troubles were to end soon. They were wrong.

A K Saxena, director, National Productivity Council's (NPC's) environment division, Delhi, has found serious faults with the landfill's design. He says that the proposed landfill is not equipped to handle toxic industrial chemicals the NIE industries spew everyday. Discussing the design, Saxena says that going by German norms, there should be about five layers of asphalt and concrete in the Nandesari landfill, each 20 cm thick and in different proportions. Only then can it stop the toxic effluents from leaching into the surrounding area. The plan, however, overlooks these and several other technical factors crucial to the safety of the people in the neighbouring areas. The US norms, for instance, require a high-density polyethylene (HDPE) liner 2.5-3 mm in thickness above the clay layer instead of asphalt concrete. But NECL rejected landfill designs that meet the US or the German standards. Further, Saxena points out that the amount of solid waste generated by the industries is formidably more than the landfill's proposed capacity.

It seems that Gujarat has developed a predilection for sub-standard landfills. The waste dumpsites in Ahmedabad and Ankaleswar, for instance, are also below acceptable standards (see box Pit falls). In its present form, the Nandesari landfill will have two layers of earth and bentonide mixture, informs Multi Media Consulting Engineers, Ahmedabad. And since the earthbentonide mixture in its -4 current ratio will be semi-ermeable, the landfill will be prone to frequent leakage, warns Saxena.

Landfill leakages are bad news for health and the environment. Toxic chemicals and industrial effluents, specially of the type the Nandesari landfill would store, include arsenic, cyanide and heavy metals such as chromium, zinc, lead and many others. Once the landfill starts leaking, these are likely to contaminate local groundwater reserves as well as soil fertility. The long-term effects could be disastrous for Nandesari: contaminated groundwater will lead to severe diseases. Arsenic poisoning could lead to black foot disease, while chromium could induce asthma and dermatitis. Lead in a known killer, often leading to mental retardation and lead palsy, particularly among the children. The lands, already barren, could lose their productivity forever. In short, Nandesari's woes, far from being over, are only beginning.

Apart from affecting health and environment, landfill leakages entail another formidable problem. As has been seen in such disasters overseas, the cost of cleaning up is huge. The US, for instance, had to set up a superfund, to clean up its dumpsites, far superior in quality to the Nandesari landfill. "If, at this stage, Indian industry could not come up with resources to make a suitable landfill, there is no way they will be able to pay for the eventual clean-up," says Greenpeace campaigner Nityanand Jataraman. Further, the false sense of security this landfill provides would encourage other industrial areas to follow suit, by building more poorly-planned landfills. Each of these will be a ticking time-bomb, a disaster waiting to explode.