The politics over smoke pollution dates back to the 13th century 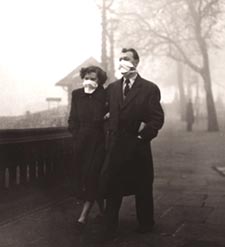 In 1905, the London chemist H A Des Voeux coined the term 'smog' to describe London's sooty air. And in a 1911 report to the Smoke Abatement League of Great Britain he described deaths in Glasgow and Edinburgh, two years earlier, as a result of smoke-laden fog -- smog. The portmanteau term is said to have entered popular parlance after that. However, the actual scourge predates Des Voeux by several centuries.

References to it date back to as early as the late 13 th century, when king Edward I banned the use of sea-coal -- the actual cause of smog -- in London and ordered the use of wood in turn. Offenders were to put to death, but this failed to deter London's residents. Wood was scarce and expensive; sea-coal on the other hand was found plentifully off the northeast coast. But this soft bituminous fuel emitted enormous smoke, which combined with natural fog to make smog.

In the late seventeenth century, scientists John Graunt and John Evelyn linked smog with morbidity for the first time. Evelyn wrote in his 1661 treatise Fumifungium: or the Inconvenience of the Aer and Smoake of London Dissipated: "Hellish and dismall cloud of sea coal...which is...so universally mixed with the otherwise excellent aer, that her [London's] inhabitants breathe nothing but an impure and thick mist accompanied with a fuliginous and filthy vapour, which renders them obnoxious to a thousand inconveniences ... corrupting the lungs, and disordering the entire habits of their bodies; so that coughs and consumptions rage more in this one city than in the whole earth besides."

Simultaneously, smog received more political attention. Viscount Palmerston -- the then Prime Minister of Great Britain -- remarked in 1853, "There are...perhaps a hundred gentlemen connected with the different furnaces in London, who wish to make two million of their fellow inhabitants swallow the smoke which they could not themselves consume." But smoke also had its supporters, not all of them industrialists. For many Victorians sulphorous gases had antiseptic properties. But the anti-smoke lobby -- spearheaded by Palmerston -- was stronger in the British Parliament and the London Smoke Abatement Act was passed in 1853. The Act empowered the police in London to take action against furnaces used to raise steam, factories and steam vessels on the River Thames. In 1891 these responsibilities were transferred to sanitary authorities.

But legislation had very little effect. Industrialists had a convenient alibi that 95 per cent smoke came from chimneys of 700,000 houses in London. Even the London County Council accepted that "open fire is such an essential feature of our national home life that any attempt to abolish it is almost out of the question." Moreover, in order to proceed successfully against offenders, authorities had to prove that smoke from their premises was coloured black! Convictions were rare.

Meanwhile smoke continued to take its toll. Subsequent epidemiological studies have shown that more than 250 people died of bronchitis caused by the London Smog of 1873. An even more serious episode in 1892 killed more than 1,000 people. But the most serious catastrophe happened in 1952: smog blanketed London for four days, killing about 4,000 people. An initially reluctant government was forced to give into public pressure and set up a committee under Hugh Beaver. The committee's 1953 report concluded that "In ratio to the coal burnt, it [domestic coal] produces twice as much smoke as industry." In accordance with the committee's recommendations, the 1956 British Clean Air Act was passed. It regulated the burning of solid, liquid and gaseous fuels, and controlled the heights of new industrial chimneys that were not covered by other legislation; grants were made available for converting or replacing domestic grates to burn smokeless fuels. The Act had its effect slowly; in 1962 smog killed 750 Londoners, but that was the last serious smog episode in the city.