Gramashrama, a children-based organisation in Karnataka, is trying to understand the causes of migration and prevent the exodus of youngsters from villages to cities. 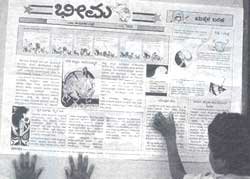 DINESH Rama of Sathvadi village in Karnataka is 12, and typical of the youngsters in rural South Kanara district, who migrate in large numbers to Bangalore, Madras and even Delhi, in search of a livelihood. Long-exploited by the Shettys (landlords), Dinesh and his friends would normally have resigned themselves to a bleak future. But, now, they can face the years ahead with hope and confidence, thanks to Gramashrama, a unique rural project.

Gramashrama was founded in January 1989 by the Bangalore-based Concerned for Working Children (CWC), and takes its name from grama (village), shra (abbreviation for shramika or worker) and ma (abbreviation for makkalu or children). The project was set up initially in Basrur, a village on the river Varahi, 10 km from Kundapur, the nearest town.
Children are the cornerstone of the project, which has spread in a short span of 30 months to more than 52 villages, mostly in Kundapur and Udipi talukas. Explaining the rationale of the project, Gramashrama director Damodar Acharya said, "The phenomenon o of c Id labour in cities is due mainly to the large-scale em tion of rural children, with or without their families, in search of a livelihood. South Kanara district probably supplies most of the little boys who work in the hotels and restaurants, not only in Bangalore and Madras but even as far as Delhi."

Describing Gramashrama's goal, he said, "By working with children and, through them with their communities, we seek to better understand the reasons that drive children to the cities and to evolve strategies to slow down, if not stem, this flow."

One reason for the migration is historical, says Gramashrama activist M Ganapathi, who is organising a 76-km p6dayatra along the Varahi from its source in Agumbe in the Western Ghats to its mouth in Kundapur. The trek is to map, with the help of local people, the ecological resources of the area, where Basrur was once a major port when the Varahi ran deep. Basrur, called Savar in the historical literature from about 300 BC, was a prosperous part of the Vijayanagar empire (14th-16th century). Its glory ended with the silting of the Varahi and now there are few opportunities in the area to earn a living. This has spurred large-scale emigration.

South Kanara has a relatively high literacy rate, but Ac harya complains, "Education is a passport to migration and even those children who do want to stay in the village find there are just no jobs for them." Local, child 'ran, he added, remain unlettered because they are poor and cannot afford to, go to school, The result is that the illiterate stay on and follow the family's traditional occupation; the others acquire some learning and migrate to a city in search of employment, however menial or meaningless the job may be. Acharya stressed the children who complete their education find themselves alienated from their roots but not trained sufficiently to get decent employment in the city.

Gramashrama's main focus is children, but the voluntears maintain close contact with the parents, especially mothers, The group's first contact with the children in a locality is followed by attempts to raise their consciousness through plays and stories. Gradually, the children are encouraged to form lihimo songhas (children's associations), The children are then guided to learn how to identify their problems, determine the caus, as and then formulate, a collective struggle for a solution.

Gramashrama activists run, non-forma education centres where child-workers togather in the evenings to sing, dance, talk and read the Rhima, Patrike, a wall-paper prepared by CWC each month in Kannadg for children, who frequent contribute letters, poems, stories and lawings to it Ahno Patrike's regular far includes. articles on health,, a cartoon stri ad on foli as tales, stories of efforts by child-workers to better their lot and news about issues relating to, child labour.
Acharya recalled it was not smooth sailing foi Gramashram-a activists in the early days. Identified b3 the people as just another government, programme, mosl thought it would close down in, time.. And, Gamapath added, "We had some of our own problems, too. sh, majol one, was to, find activists who would stay on long enough in the,ilprganisation."

Discussions with the children on their hopes for the future convinced Gramashrarna activists that while they did indeed enjoy the games and the lessons at the centres, the children desperately wanted to escape the endless drudgery of grazing cattle or working as a teashophelper, or as a domestic servant. What the children wanted most of all was to acquire vocational skills.

Gramashrama began with a couple of disappointing experiments in developing vocational training programmes and income-generating projects. After failing with jasmine cultivation and soap-making, Gramashnima activists seriously explored the entire issue of technology in relation to the working child. They held discussions with academics, technologists and rural people, and then launched a three-day workshop in July last year in Basrur, with the theme,. Hale beru hoso chiguru (Old roots, new shoots), to facilitate interaction,and exchange of information between the people and technologists from organisations such as the Karnataka State Council for Science and Technology and Society for Development Alternatives. Discussions with villagers were held in the villages so as to enable the whole community, including women, to participate.

The workshop brought home to the people the fact that unity and the sharing of information are a source-of strength. Said Basavanna Koraga, a basket-weaver from Talamakki village, "Traditional occupations could be revived if artisans respect and cooperate with each other." Kustakulal, a potter from Valthur village, where Gramashrama constructed an improved kiln, added, "We realised that many of our traditional methods could not be carried on at present due to lack of resources. We would have to be open to new technologies, designs and marketing strategies." But, noted Basavanna Koraga's wife, Nagakka, '"All this would be possible demandec only if we are proud of our own work and of land on buy locally made things as far as possible."

Such realisations led to the formation of to plant 0 namma gumphu (our group) for workers in various trades and crafts. Each gumphu own foresi. elects representatives to the namma sabha (our assembly), an umbrella organisation whose functions include organising namma angadi (our shop) marketing outlets for each sabha's products, which include woven goods, pottery, basketry, coir products, mats and leather objects.

Late last year, namma sabha and Gramashrarna jointly organised a fair in Kundapur, putting on display a variety of local products and other unusual, low-cost products such as smokeless stoves and modified looms. Gramashrama was also instrumental in organising a mobile namma angadi, which calls at various villages. Sales of local wares have been encouraging but not dramatic, said Ganapathi. Meanwhile, namma sabha, which has been looking at ways to meet the basic needs of the community, has acquired some land - namma bhoomi - in Kayana village and set up a community training centre where adults are taught to city of build smokeless namma oles (our stoves) and an improved version of the traditional mestic jaggery ole.

Prompted by an acute scarcity of fuel sangha for domestic use, bhima sangha children ave have demanded a piece of land on which to plant their own forest- namma kadu - apiece which Would include fuelwood and bamboo and creepers their parents could use to make baskets and weave mats.

The process the children began, by persuading Gramashrama to educate them, has gained support from some of the authorities. The state horticulture department, for example, has begun training some of the older children in maintaining nurseries and in horticulture.


But Gramashrama volunteers are conscious that much more remains to be done. Many adults, for instance, continue to be indifferent to organising themselves into associations, even though this would improve their lives. Ten-year-old Nagaratna of Ulloor village, an active bhima sangha member, said she could not understand why the adults in her village had not yet set up a namma gumphu. "They do not do what they should do, but if we gain anything through our sangha, they enjoy all the facilities," she complained. Nagaratna and her sangha colleagues are now pressing their demand for a ration shop and a tubewell in their hamlet.

And, Nagaratna states firmly even if she gets married and has to leave her village, she would work to start a namma gumphu in her new home because "the experience of the bhima sangha has helped me a lot". She is keen-, she said, to learn basket-making so she can earn money and be on her own so she can then organise protests against menfolk drinking and cutting down tree.