In Himachal Pradesh's Kullu district is the Great Himalayan National Park. An eco-development project meant to benefit people of Tirthan and Sainj -- two valleys that bound the park -- began in 1994. The project was scrapped in 1999. Some from Sainj valley found work in the Parvati hydroelectric project 2000 onwards. Those from Tirthan still rely on the forest. A source of sustenance is guchhi (Morchella Esculenta), a herb much in demand. Traders in Delhi buy it for Rs 6,500-7,000 per kilogramme. But how do primary collectors and village-level traders fare? vikas parashar finds out 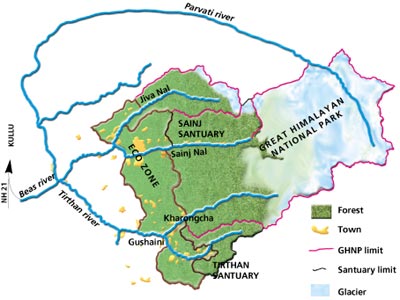 Twenty-eight year old Preetum Singh of Kharongcha village in Tirthan valley has been going into the park since he was 14 to collect herbs and graze his cattle. I found him about 500 metres inside the park. Initially reticent (he thought I was from the Forest Department), he then opened up.

Don't authorities stop you from going into the park?
(Laughs) When the sahab comes visiting, the guard warns us in advance to stop grazing. What else can I do but collect herbs and graze cattle? We know it's harmful for the park.

Did you venture into the park for herb collection this year?
Yes, I went there to collect guchhi and other herbs. But this was a drought year. So I could collect a mere 250 grammes of guchhi. Last year we collected 4.5 kilogramme (kg) and sold it for Rs 3,300 per kg to Anuj Sood at Gushaini. This year rates dipped to Rs 2,500 per kg.

Is it worth the effort?
My family can make about Rs 25,000 per year from herb collection. Some families make more than Rs 30,000.

People like Preetum sell herbs to traders at two big villages in Tirthan: Gushaini and Barthad. We caught up with one such herb trader: Anuj Sood.

You seem to be quite busy?
Yes, it's election time and only a day is left for polling.

Does politics solve the problems of these villages?
Umm, the poor in this area depend upon the park, almost totally. A big majority here is landless and collects herbs such as guchhi, mahndi, dhoop, pateesh, hathpanja and nihanoo.

When are these herbs collected?
Each herb has its season. Guchhi is collected in March and April. August is the month for mehndi and nihanoo is picked up during October. Come October -- and snowfalls -- all extraction ends.

What are the rates at which you buy gucchhi from the collectors?
The rates vary seasonally. On an average, we purchase it for Rs 4,000-4,500 per kg.

How many herb traders are there in Gushaini?
There are seven of us. But this is not the only centre for herb sale in Tirthan valley. There are another 10 traders in Bathad that I know of.

How much do all such traders collect?
In peak time, all of us purchase about 150 kg of guchhi. But collection is completely climate-dependent. For example, there were droughts this year, so I was able to buy only about 10 kg of guchhi from collectors in Tirthan valley.

How much guchhi is taken out of all herb collection centres in the valley?

Who do you sell your herbs to?
Small village traders like me sell herbs to traders in Kullu. They, in turn, sell them to big traders in cities such as Amritsar. From here the herbs reach Delhi. Most of it is then exported.

How are profits shared at the village level?
Small traders appoint a dalal (intermediary) at each village. This intermediary contacts herb collectors at the village, lends them some advance and secures rights over their collection. The dalal is a very vital cog in the the guchhi trade. Sometimes, people also sell herbs directly to traders. In this region, they put their collection up for sale at the annual fair on May 15 at Banjar.

How much do you make?
I don't get much. Profits don't motivate me. I just want to facilitate my villagers.