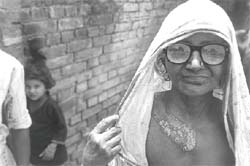 in 1995, when Krishna Devi of Motipur village in Kanpur, Uttar Pradesh, had rashes all over her body she dismissed it as a minor ailment. But five years and several visits to the doctor later, the rashes have turned into large boils and the pain is excruciating. She spends Rs 300 every month on medicines.

Sita Ram, 70, of Kishanpur village is living with an even more gruesome ailment. In the last couple of years, his fingers and toes have started rotting away. For a person who was active in the fields until recently, walking is now becoming an impossible task.

Krishna Devi and Sita Ram are just two of the many people afflicted by rare skin diseases. People in 20 villages living in the vicinity of the Jajmau tannery area in the city are in the grip of severe epidemic-like conditions. While most elders have varying degrees of stomach problems and skin diseases, the children are the worst affected. Worms pop out from their mouths each time they vomit. It is alleged that the cause for the malady is the tannery discharge, which finds its way into the irrigation canal reaching these villages.

"Till 1992, the water we got in the canal carried Kanpur sewage but was diluted by the water from Ganga. The agriculture produce was excellent and this area was famous for its roses. But after the construction of a common effluent treatment plant ( cetp ) at Jajmau, the canal was polluted by the effluents," says Sukhdev Yadav, a village elder from Motipur who has witnessed pollution take a toll on their lives.

It has been eight years since the first cetp at Jajmau was commissioned under the first phase of the Ganga Action Plan ( gap ). With the demand for raw leather increasing, the number of tanneries in the area has increased threefold from 1992 till now, and along with that the pollution load. Of the 300-odd tanneries functioning in the area, only 14 have chrome recovery plants and the rest discharge their effluents untreated. Hence, even the two sewage treatment plants with a capacity of 5 million litres per day (mld) and 130 mld respectively and 36 mld cetp are unable to handle the waste generated.

There are two channels built to prevent the discharge of this treated and untreated effluent into the Ganga. Both find their way into a sewage farm. However, for the last couple of years, due to one of the channels being under repair, two-thirds of the effluent is being discharged straight into the Ganga and the rest of it into the irrigation canal. Besides, the problem is heightened by the fact that there is hardly any electricity to keep the plants going. It has resulted in untreated effluents being released into the channels and the Ganga all day long as tanneries continue production using generators.

A study conducted by the Central Pollution Control Board ( cpcb ) in 1995 showed high levels of alkalinity, hardness, dissolved solids, iron and lindane -- an organochlorine -- in the groundwater. The high coliform level indicated possible contamination due to sewage. cpcb had recommended that these areas be declared unsafe and drinking water supplied to them. But nothing of that sort has happened. Adding to the problem is the huge pileup of toxic chromium sludge being dumped by the cetp in the plant's vicinity. According to conservative estimates, there are about 300 truckloads of sludge lying in the open for years with more being added every day. During rains hazardous heavy metals get leached into the groundwater, making the problem even more acute for the villagers.

According to a survey conducted by the Norwegian Institute of Water Research, Oslo, chemical oxygen demand concentration was 800 milligram per litre (mg/l) -- three times higher than the national permissible limit of 250 mg/l, while the chromium level of 10.9 was five times higher than the limit of 2 mg/l. According to the institute: "The water is highly polluted. This water should not be let out in nature without thorough cleaning. Skin problems and rashes of the people can be explained by the high concentration of chrome in the water. Or, alternatively, pcp (pentachlorophenol), a fungicide that is commonly used to prevent growth of fungi in leather, but is now banned in many countries. pcp is known to cause allergies."

The villagers know that the canal water is polluted, but they are forced to use it. "We have no other source of irrigation. What we grow is contaminated. This is why we sell what we grow and buy food produced elsewhere instead," says Sukhdev Yadav.

According to Mulayam Singh, principal of the Narayan Prasad Higher Secondary school in Shekhpur village, almost half of the school students are always absent on account of ill health. "It wasn't so bad 10 years ago. This area was like mini-Punjab. The crop was excellent and even the landless had a couple of buffaloes. Today, each one of my students has worms, I am myself suffering from skin allergy," he says.

The problem would have gone unnoticed had the Municipal Corporation of Kanpur not raised the irrigation cess from Rs 60 to Rs 150 this year. The villagers could take it no more and approached the local non-governmental organisation, Ecofriends. In a door-to-door survey by Ecofriends, it was revealed that for sometime now a majority of people had been suffering from skin and stomach ailments like diarrohea, worm infection, dysentery and often cholera. A significant number had acute asthma. Further, as many as 1,200 people were reported to show symptoms of tuberculosis and leprosy.

In March, a huge tractor rally was organised and Kanpur roads blocked for hours. Several politicians turned up to sympathise. But deputations to Mayor Sarla Singh and a visit to the area by J N Vishwakarma, mukhya nagar adhikari , have had little effect. Now the people have decided to act on their own and have unanimously vowed not to pay any money to the government for the poison that is being sold to them. In fact in a recent incident, municipality officials were confronted by a group of villagers and forced to return about Rs 5,000 collected by them from farmers in the area. "We will beat them up if they dare to come here again. We are living a life worse than that of animals. There is no electricity, no water and they want us to give them money," says Bindra Prasad of Motipur.

While some hope was generated by the April 14, 2000, surprise visit to the area by the state minister for urban development, Satish Mahana, who promised immediate relief in the form of more tubewells and health camps, nothing has materialised as yet. Recently the Industrial Toxicology Research Centre, Lucknow, conducted an environmental epidemiological study in the area, but the results are still awaited

Villagers of the area have formed a panchayat called the Ganga Vahini . They are planning to approach the courts for justice. Till the time they get respite from all quarters, they are forced to visit the numerous quacks that have set up shop in the villages; and listen to politicians who have found yet another electoral issue. They are driven by the slogan: " Sookhe khet, maili Ganga... kisan ho raha bhookha nanga . Sewage ka paani zahar hai, zahar ab nahin bikega " (the fields are barren, the Ganga polluted... farmers are getting poor and hungry. Sewage water is poison, poison will no longer sell).

The article is based on a note by Rakesh Jaiswal of Ecofriends, a Kanpur-based non-governmental organisation.