Dams are robbing Kinnaur of its big cash crop—apples 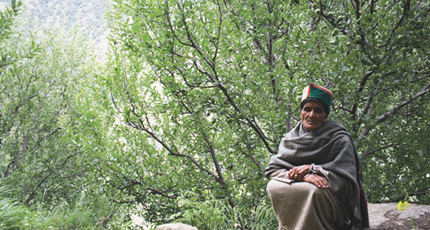 Satya Devi’s 35 apple trees have borne few fruits this year. The 60- year-old blames it on too little moisture in the soil and too much dust in the air that settles on the leaves.

The horticulture department of Hima chal Pradesh agrees. Construction of dams on the Sutlej in Kinnaur district is the prime reason the yields of apple and chilgoza—two big cash crops in the district— have declined, note apple orchardists and state government reports.

Satya Devi has been harvesting apples in her orchard for 25 years. Until five years ago the orchard would fetch her Rs 3 lakh even in adverse weather. This year hardly any apples appeared till June that could be harvested by September. Her village Urni is one of the four in Nichar block underneath which runs a 17-km-long tunnel for Karcham- Wangtoo dam, the biggest of the 34 dams proposed in Kinnaur. It is also one of the three under construction.

“Hundreds of trucks move up and down the hills daily, raising dust,” said Satya Devi. “The company (Jaypee Karcham Hydro Corporation) has blasted the mountains and thrown the muck along the river. Some times there is so much dust it feels like night in the day time.” Fine particles from the crusher that provides cement for the 98-m-high dam add to the nuisance.

Shyam Sunder Negi’s village Chagaon is close to where the muck is dumped. He owns a hectare (ha) of orcha rd. He sold 2,000 boxes—a box is 17 kg to 26 kg—of big and medium-size apples in 2000. This came down to 500 boxes in 2009. The 700 families in Chagaon depend on ap ples for earning. The village sold 300,000 boxes in 2005. In 2009 it sold 50,000. “This year the trees have hardly borne any apple,” said Negi, one of the 694 residents in the reg ion who have petitioned the Supre me Court to cancel the Rs 7,760-crore hydroelectric project’s environmental clearance. The size of apples and juice in them have also decreased.

Debris all the way

Debris from blasting is dumped carelessly and illegally in Nichar along a 20- km stretch in the Sutlej basin, said R S Negi, an activist. The builder used 10 ha more land for dumping than allotted in the environmental clearance, he said. Apple production in Kinnaur has declined from 50,864 tonnes to 36,726 tonnes between 2008 and 2009, as per the district horticulture department.

The drop, it said, resulted from a combination of weather and local conditions (see: ‘Apples go higher in Himachal’, Down To Earth, November 1-15, 2009). Some of the decrease is because construction of dams has dried streams, reducing moisture in the soil.

Hydel projects are also hurting the production of chilgoza, a rare dry fruit. Chilgoza trees regenerate naturally. In India they grow only in Kinnaur. Hundreds of chilgoza trees have been felled to make way for the approach road for Tidong dam, say residents of Rispa village in Nichar. Rispa is a prosperous village with 80 families, each holding 5.6 ha on average. They depend on chilgoza apart from a little farming. “Our ancestors lived off chilgoza trees as they last hundreds of years,” said Vinod Kumari, who owns 60 chilgoza trees. “I have lost most of my trees to illegal felling.”

While laying the road the builders, Hyderabad-based Nuziveedu Seeds Ltd, damaged many more trees than 1,261 allowed in the forest clearance, noted an inspection report by the district administration. Residents of six villages in Tinala forest say they stand to lose 80 per cent of their chilgoza trees to blasting and debris dumping. “Tunnel ing for the dam will start soon. We will be left with hardly any trees,” Vinod Kumari of Rispa, said. “When we have good plantations, why does the government want us to take up daily-wages job?”