Demand for neera, the fresh sap of young coconut flowers, is rising with advances in food preservation technologies. It's time Kerala stopped classifying it as country liquor 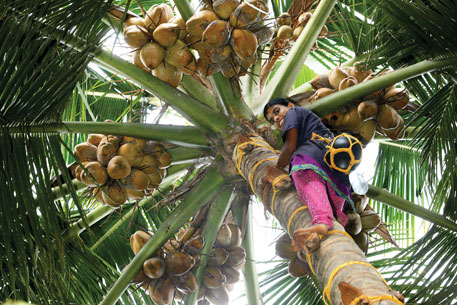 It's like doing the unimaginable for Vidya P T, a resident of Kuruvattoor village in Kozhikode district of Kerala. She tightly clasps onto the trunk of the coconut tree and starts climbing it. Two knives and a piece of bone remain tightly fixed to her waistbelt; a small, sterilised pot hangs from it. On reaching the crown, Vidya tends to a spadix—a young inflorescence of coconut palm. She removes the bright sheath around it, gently taps the flowers for a while using the bone, cuts the tip of the spadix, and ties the pot next to it. It would take 12 to 15 days before the flowers start oozing sweet clear sap into the pot. Then, for the next few months, Vidya would climb up and down the tree every morning and evening to collect the fresh sap or neera.

Vidya is one of the four women in a batch of 20 youths who are being trained as neera technicians by the federation of coconut producers’ societies at Payimbra village in Kozhikode. Over a hundred federations in Kerala are providing similar training. They want a new batch of neera technicians ready to cater to the growing demand for the delicious health drink, both across the country and outside.

“Traditionally we used to extract a lot of neera. It was even given to pregnant women and children as health drink,” recalls P Aravindan, president of Payimbra federation. But the practice was forgotten after the government classified neera as country liquor and placed it under the Kerala Abkari Act, 1967, that regulates trade in liquor.

In the past one year, neera is regaining its glory. There is a growing awareness about the health benefits of coconut inflorescence sap worldwide. In India, the Coconut Development Board (CDB), a Central government agency,has started promoting it as a health drink. “Neera is more nutritious than any other commercially marketed fruit juice in the country,” says T K Jose, chairperson of CDB. Jose, who serves neera as a welcome drink to all those who visit his office, claims that sugar, jaggery and syrup made out of neera are also highly nutritious. 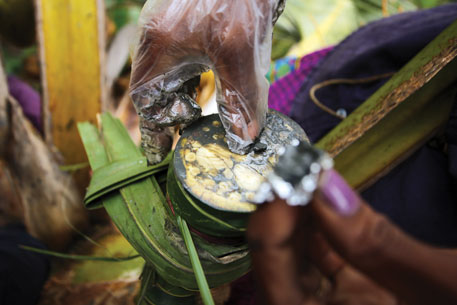 As per articles published in the Indian Coconut Journal of CBD,neera is a rich source of minerals and vitamins. It has substantial amounts of iron, phosphorus and ascorbic acid. Palm sugar, which is made by boiling neera, contains protein, 16 amino acids, Vitamin B, iron, potassium, magnesium, calcium and zinc. It can be useful for treating anxiety, depression and biopolar disorder. The most significant characteristic of neera and its products is low Glycemic Index (GI), an indicator of the extent of sugar absorbed into the blood. While table sugar has a GI of 70, sugar made from neera has a GI of 35. Foods with GI less than 55 are classified as low GI foods, and can be used by people suffering from diabetes and high cholesterol.

The change is already visible on the ground. Of the 19 coconut farmer-producer companies in Kerala, Palakkad Coconut Producer Company (CPC) and Kaipuzha Coconut Producer Company have launched their neera brands in the market. “Our objective is to replace unhealthy aerated drinks with fresh and healthy neera,” says Joji M Thakkadi, chief executive officer of Palakkad CPC, which produces 500 litres of neera a day. It sells its product through 20 outlets and charges Rs 25 for 200 ml. It also sells palm sugar at Rs 350 a kilogram. Kaipuzha CPC sells neera through vending machines and charges Rs 25 per 200 ml; bottled neera costs Rs 30 per 200 ml. Kaipuzha CPC has a daily turnover of Rs 10,000 and has set up a plant with a capacity to process 10,000 litres of neera a day at an expense of Rs 1 crore.

Coconut farmers are happy about the revival of neera at a time when they are facing price fluctuations and monopoly by copra-coconut oil traders. A coconut tree can yield 2-4.5 litres of neera a day, depending on the health of the tree, season and skill of the neera technician. “Even if a palm yields two litres, we get a minimum assured income of Rs 50 per tree a day for six months. If we leave the palm for nut production, we would get as much amount in a month,” says C Chandran, a farmer in Kuruvattoor panchayat who has leased out 50 coconut trees on his homestead for neera extraction.

Neera is also generating employment for the youth. A neera technician receives a monthly salary of Rs 10,000. This is over and above the incentive they receive for extracting each litre of neera and the insurance coverage for any accident, says Anitha Babu, a neera technician in Kozhikode district.

“If 10 per cent of the 180 million coconut trees in the state is available for tapping neera, it can generate one million employment and contribute Rs 54,000 crore to the gross state domestic production,” says Jose.

However, the state is yet to realise the potential of the sap. Between March 2014 and January this year, the state government has granted neera extraction licence to only 173 of the 345 federations in the state and is delaying the issue of fresh licences.

What prevents the promotion of neera is its wrong inclusion in the Abkari Act, which defines the non-alcoholic, unfermented juice as country liquor. “This is akin to interpreting milk as curd since curd is produced from milk,” explains Jose. He points out that the Abkari Act came at a time when no technology was available to preserve fresh neera. Now, technologies have been developed by institutions such as the CDB Institute of Technology, the Kerala Agricultural University, the Central Food Technological Research Institute and the Defence Food Research Laboratory for arresting the fermentation process. In fact, neera can now have a shelf life up to one year, says ReshmiSajai, technical officer with CDB.

In 1939, Mahatma Gandhi wrote that making neera sugar as a cottage industry is a way to solve the world’s poverty. Indonesia and the Philippines market palm sugar with Mahatma Gandhi as their brand ambassador with his words inscribed on the packets. It’s time India wok up to its potential.