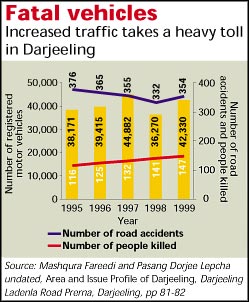 Evam Piljain, an 80-year-old Toda who's spent all her life in Ooty, feels distraught at the sight of her hometown. "I cannot sit in the verandah anymore," she says. She moves to her drawing room and gazes wistfully at a photograph of Ooty taken in the early part of the twentieth century -- green, picturesque. But outside, hill after hill is chock-a-bloc with concrete buildings.


Other Indian hill-stations are no different. Roller-compacted concrete (RCC) has taken over from wood and mud and is now synonymous with construction. Reminisces B P Rai, secretary, Federation of Societies for Environmental Protection, a Darjeeling-based NGO, "Earlier, there were only small wooden houses. But with increased population, the need was felt to construct RCC multi-storey buildings, which can take a load of 7-8 storeys. This has spelt disaster."

The fact is that hill-stations are blindly aping cities in the plains. "Modern is synonymous with tall structures. Hence, hill people have also started aspiring for modern facilities like cineplexes and shopping malls," says Atreya. A huge 8-10 storey high Rink Mall complex is coming up right in the heart of Darjeeling town. Gorkha Rang Manch, a 10 storey tall structure, is another 'fashion statement'. And none other than the DGHC is building it. Binita Chhetri, a schoolteacher in Gangtok, narrated to Down To Earth an incidence of a young student who forced his parents to go in for a RCC house because all his friends were living in such houses.

Each hill-station has set a ceiling on the height of buildings, but this is often violated. In most instances, authorities themselves are the defaulters. Take the case of Shimla, which has a 12-storey High Court building. Wonders a resident, "Earlier, we could go to court against illegal constructions. Now, how can the lordships who sit in such a building be expected to respond to our pleas?"

Following the death of 52 people in landslides in Gangtok in June 1997, the Sikkim government revived an old law limiting the height of buildings to 15 metres, but by then almost the entire town had turned into a concrete jungle. "Most buildings belong to politicians and bureaucrats and now it is very difficult to demolish them," says an officer.

The threat to these hill-stations due to RCC construction increases with every new structure. The greatest risk is from earthquakes, for hill-stations are in high seismic zones. Shimla, Darjeeling and Gangtok, for instance, fall under Zone IV, a high-risk zone. In addition, the debris discarded during construction threatens the local ecology by preventing any life form to grow under it. This accentuates, in turn, landslides.

Increased traffic movement also leads to landslides. The approach roads the British laid were meant only for light vehicles. But today, the same roads are used to transport goods in heavy vehicles. No one has assessed the capacity of these roads against present traffic loads.

But Mamta Desai, a professor at Kolkata-based Netaji Institute for Asian Studies, in her 2003 report, Identification and mapping of hazard prone areas regarding landslides in the Darjeeling hill areas, has stressed the fact that "...due to constant lateral vibrations [caused by moving traffic], the already weak geological structure has become unstable."

Experts claim that an entry-tax should be levied on vehicles entering the hill-station. This will not only check jams, but also raise resources. Manali in Himachal Pradesh has recently introduced a 'green entry tax', as directed by the High Court, and raised Rs 23 lakh from it within a month. But the future of this tax hangs in limbo as the 'green tax committee', as proposed by the court, is yet to be formed.