Fast-expanding steel industry yet to find an effective way to reuse its waste product, slag 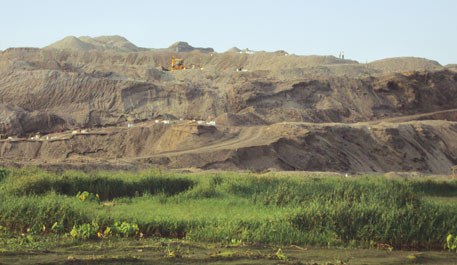 The road to Tarkera village in Rourkela offers an unusual sight: grey hillocks amid lush green hills. The strange addition to the landscape is slag, a waste product of the steel industry, which has piled up over decades. Due to poor waste dumping practices of Rourkela Steel Plant of Steel Authority of India Limited (SAIL), the slag has polluted the air besides occupying huge tracts of land. The story does not end in Odisha. Steel plants across the country have failed to chart out a way to use or dispose of slag.

Slag is produced while separating molten steel from impurities. During the process, the unwanted carbon content in the molten metal is removed as gaseous waste, while impurities like phosphorous and silicon are removed as solid waste. Production of one tonne of steel generates half a tonne of solid waste. Steel slag constitutes 20 to 40 per cent of this solid waste. Given that the annual steel production is increasing at eight per cent, the amount of slag generated by 2020 is estimated to be 25 million tonnes. With no effective disposal plan in sight, the industry has a Herculean task ahead.

As per an agreement under the Charter on Corporate Responsibility for Environment Protection, formulated by the Centre in 2003, integrated iron and steel plants were to fully consume the slag they generated by 2010. But the actual consumption was very less, according to Delhi NGO Centre for Science and Environment’s Green Rating Project (GRP), which rated the iron and steel sector on its environment friendliness. Worse, the government has given approvals for new plants and expansion of existing plants based on promises made by companies that the slag will be completely reused. This is technically not feasible. According to GRP findings, released in 2012, steel industries can gainfully consume only 20 to 25 per cent of slag. Here’s why:Ã”Ã‡Ãªpresence of corrosive phosphorous in slag limits its re-use within the plant. A few plants carry out metal recovery but recovery rates are low. Some use slag in road construction and as railway ballast. This, however, is limited to roads and railway tracks of the plant because such application is not approved for public infrastructure. As a result, most plants dump slag in landfills.

While India struggles to tackle slag, countries around the world have found various ways of utilising it. The UK, US and New Zealand use slag as aggregates in road construction, while Canada uses it as railway ballast. In China, the world leader in steel production, a type of composite cement consisting of a mixture of steel and iron slag is used. In all cases slag is diligently processed to achieve requisite specifications, including “stability”. Unstable slag, which has high lime content, absorbs water and expands, causing structural de-stabilisation over time. 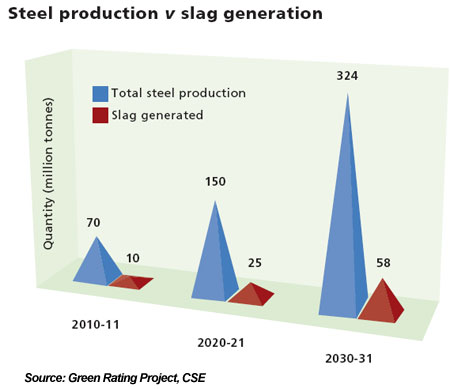 Back home, inadequate efforts to process slag have been the limiting factor for its reuse. Consider the case of railway ballast. It is a critical part of the railway design meant to ensure equal distribution of load on the tracks. To be used as ballast, steel slag must conform to the impact and abrasion values set by the Research Designs and Standards Organisation (RDSO) of the Railways. An RDSO official says, “With each passing year, availability of natural rock is reducing. If steel slag can conform to quality standards, using it will be a welcome change.” The requirement is substantial given that about 1,500 cubic metre of ballast is needed per kilometre of a track. The issue of quality hampers use of slag in road construction too. In both cases, however, the primary pre-condition to use slag is that it has to be sufficiently weathered or aged. This is a challenge considering the companies’ dumping practices have been such that the oldest slag is buried beneath the pile of the latest, making it impossible to identify slag’s age.

In mid-1990s SAIL had supplied slag to the Railways but was rejected as it had not aged sufficiently. SAIL continues the practice of piling slag; it says the piling is done to minimise use of land. At present, SAIL has only 1.2 million tonnes of slag that it believes is duly weathered. This is yet to be tested by RDSO.

The cement industry is resource- and carbon-intensive. During manufacturing, limestone is heated in a rotating kiln which leads to the formation of lumps called clinker. This clinker is then ground to form cement. Production of a tonne of clinker generates 0.9 tonne of carbon dioxide.

A way of reducing environmental burden is by producing a “blended” cement called Portland Slag Cement (PSC). In this, the clinker is partly substituted (up to 65 per cent) with iron slag, thereby reducing carbon footprint. Independent studies advocate use of steel slag along with already-approved iron slag. The Bureau of Indian Standards (BIS), however, says that steel slag will adversely affect cement’s compressive strength. On the bright side, BIS has given in-principle approval for adding five per cent steel slag as a performance improver in Ordinary Portland Cement (which has 95 per cent clinker). Not only will it reduce consumption of clinker but will also improve cement’s performance by reducing water demand, says A K Jain, technical adviser at Ultratech Cement. “This is a small but definitely the first step towards recognising the potential of steel slag in the cement industry,” says R P Sharma, former chief of the environmental division Tata Steel. He adds new standards must be formulated taking a blend of slag into account. “There have been studies proving the possibility of substituting up to 10 per cent of clinker with steel slag in PSC without compromising on quality.”

A senior BIS technical officer advises a cautious approach: “Cement quality cannot be compromised and the norms will continue to be stringent, irrespective of what they are in other countries. There is a need for more conclusive evidence before new standards are formulated.”

Looking at the three major sectors where slag can be utilised (roadways, railways and cement), one theme seems to recur, lack of research and development (R&D) initiatives.

A 2012 report by the steel ministry, A Roadmap for Research, Development and Technology for the Iron and Steel sector, states that companies invest a mere 0.15 to 0.25 per cent towards R&D. Research institutes like National Council for Cement and Building Materials and RDSO operate on the funding received from industries and government. With little money coming in, the research institutes are not able to carry out studies to confirm safe use of new materials like slag in relevant applications. The steel ministry says besides R&D, lack of collaborative efforts have hampered effective use of slag. “The industry, government and end users must come together to arrive at a feasible solution. The government can make funds available for identifying processing technologies provided the industry also contributes,” says A C R Das, industrial adviser, Ministry of Steel.

While the industry continues to ponder over disposing of steel slag, a recent development offers a ray of hope. The Indian Road Congress has given accreditation to a US-based firm for a two-year trial use of processed steel slag in construction of road embankments.