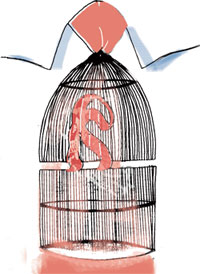 In October, a government hospital in Delhi refused to give an infant born to an HIV-infected woman a dose of Nevirapine. This drug, which prevents mother-to-child HIV transmission, must be administered within 72 hours of birth. Under the National AIDS Control Organisation (NACO) guidelines, hospitals must always be stocked with Nevirapine. It was only after the hospital authorities were asked to give in writing that they do not have the drug, that they administered it. In another instance, an HIV-positive woman in Meerut had to deliver her child on the pavement outside a hospital because she was refused admission.

“This is the level of discrimination and indifference people living with the disease face every day,” laments Mudrika, who works independently with AIDS patients in Delhi. She, along with many civil society groups, is demanding that the Union health ministry pass the HIV/AIDS Bill in the winter session of Parliament.

Drafted in 2006 by the health ministry after four years of discussions with healthcare workers, lawyers, non-profits and AIDS patients, the bill includes an anti-discrimination clause, besides free diagnosis and treatment. But inaction on part of both the ministries of health and law has delayed the introduction of the bill, says Raman Chawla, senior advocacy officer at Lawyers Collective, an advocacy group. Chawla adds, “On July 4 while meeting a delegation demanding introduction of the bill in Parliament, health minister Ghulam Nabi Azad said the government would not like to legally commit to providing free treatment.” The bill was sent to the law ministry in 2007. Ever since, it has been shuffling between the two ministries. On World AIDS Day (December 1, 2011), Azad assured that the bill, currently with the law ministry, would return to the health ministry within 10 days. Civil society groups are disappointed because the health ministry is not sharing with them the draft bill sent to the law ministry. They fear the bill might have been tweaked in a way that would reduce access to treatment. Venkatesh Nayak of non-profit Commonwealth Human Rights Initiative says the draft bill cannot be legally kept under wraps.

The present HIV programme of the government provides first line anti-retrovirals (ARVs) for free, but second line treatment (for people with immunity against the first line) is not easily accessible. Medicines for opportunistic infections like marks on cheeks, and for blindness caused by ARVs are rarely available in hospitals. Gunacyclovir, an injection given to patients who suffer from blindness, costs Rs 45,000 per dose. “Three of my companions have gone blind because they could not get this injection,” says Pradeep Dutta, president of non-profit Nai Umang. Charles Gilks, UNAIDS country coordinator for India, says, “A good law will ensure that the HIV-affected have access to treatment in a non-discriminatory way.”

Another growing concern for India’s HIV/AIDS programme is the global funding crisis. International agencies that were funding the National AIDS Control Programme are now funding only low-income countries. “India is now counted as a middle-income nation,” says Anand Grover, director of Lawyers Collective. In the current phase of NACO (2007 to 2012), 25 per cent of the funding comes from the government, the rest is from the agencies like the World Bank, the UK’s Department for International Development and the Global Fund. In the next phase (2012-2017), there is likely to be a shortfall of funds because most of the funding agencies are pulling out.

To meet the shortage, discussions are going on to integrate some activities that fall under NACO with the National Rural Health Mission. For example, the budget for condom promotion activity. This change in budget allocation for NACO’s activities is currently under discussion. “It is anticipated that NACO’s budget will be maintained but only prevention will stay under it,” says Gilks. To meet the UN target of zero new HIV infections by 2015, more money is needed to increase treatment centres and workforce, adds Gilks.