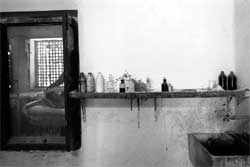 Arvind lal of Delhi's Lal Path Labs has been in the pathological diagnostics business for the past three decades. "Prescriptions instruct what tests should be conducted. If a pathogen is absent, we do not report the presence of another. So, many diseases remain undiagnosed, though they can be easily identified," says Lal. "Twenty per cent of the cases that we receive remained undiagnosed and are presumed to be fevers of unknown origin," says J N Pande, head of medicine at the All India Institute of Medical Sciences, New Delhi.

Most doctors in India do not believe that there are unknown pathogens that cause these fevers. "There is nothing like an unknown or a mystery fever, they just remain undiagnosed," contends B K Ram, G T B Hospital, New Delhi. "Fevers are symptoms that are meant to be treated with a variety of antibiotics. Only serious infections such as meningitis call for pathological tests," says Ram. "When we fail to control a fever, we prescribe medication for malaria or tuberculosis depending on the symptoms," says A K Singh, deputy superintendent, Patna Medical College Hospital, and claims, "this is the World Health Organisation (who) protocol for tropical countries."


Warding off the threat of an epidemic by using a broad spectrum of antibiotics may appear to be a potent option. But the risks attendant on this course of action are many. For one, it is probable that the medication will suppress the symptom without treating the condition. Another alarming possibility is that it may induce resistance in the pathogen even before it is identified. Hard-pressed for time as they are in view of the large number and heterogeneity of their patients, doctors too do not anticipate mysterious fevers.

Most experts aver that identification of pathogens is quite elementary. But complications arise because diseases go unreported at the grassroots level. "They remain unidentified because samples are collected without considering where the pathogen is likely to exist," says K K Datta, director, National Institute of Communicable Diseases (nicd). If the disease is not reported, it does not find mention in the documents published by the institutes, thus remaining a mystery. nicd, which 'occasionally' publishes annual reports, brought into focus several mystery fevers raging across the nation in the 1980s.

While these unknown ailments struck Sabarkantha and Baroda in Gujarat in 1982, they surfaced in Sikar, Rajasthan, in 1983. Two state capitals -- Shimla (Himachal Pradesh) and Jaipur (Rajasthan) -- were afflicted in 1984. The fevers were detected in Ahmedabad in Gujarat in 1996, while Vizianagaram (Andhra Pradesh) and Meerut (Uttar Pradesh) experienced them in the following year.

Let alone unidentified fevers, even some known diseases pose problems in detection. Take, for instance, the cases of the plague in Surat and leptospirosis in Mumbai. Datta says that some diseases fail to appear on pathologists' 'radar'. So when they strike, diagnosis is difficult. Kalyan Banerjee, former director of National Institute of Virology, Pune, believes changes in the pathogen can modify the symptoms and delay diagnosis. This was demonstrated by the many strains of dengue. Such an outbreak necessitates laboratory investigation, only after which can diagnosis be done.

"The tendency to term a fever 'unknown and mysterious' shows our inability to identify a particular change in a pathogen's character," says S K Kar, director of the Regional Centre for Medical Research (rcmr), Bhubaneswar. To identify the disease quickly, there must be an enduring pursuit of the knowledge which the country lacks, rues Banerjee. Some experts like N S Deodhar, former director of the All India Institute of Hygiene and Public Health in Kolkata, feel that unknown diseases are directly proportionate to the ignorance of the people identifying the pathogen.

When an unidentified fever strikes, the usual cover-ups are resorted to. Even if the local media brings it to the attention of the public, medical agencies dismiss these reports and make the ailment out to be malaria (especially cerebral malaria), Japanese encephalitis, dengue, cholera or gastroenteritis. If, however, the symptoms don't match any of these diseases and higher-ups are not convinced, it is promptly termed a mystery fever.


One of the reasons why unidentified fevers go undetected is that research bodies undertake disease-specific studies. Most Indian Council for Medical Research (icmr) institutes are working on very specific diseases and are not trained to identify unknown organisms.The Regional Medical Research Centre for Tribals in Jabalpur, Madhya Pradesh, which has been active for the past 17 years, has only focused on yaws (a form of syphilis) and malaria. Though its director, R S Tiwari, admits that unknown and mysterious fevers exist, his institute is yet to identify a single one.

Neeru Singh, field director of Malaria Research Centre (mrc), Jabalpur, also acknowledges that mystery fevers are lurking but clarifies that mrc is focusing on malaria only. P K Sinha of Rajendra Medical Research Institute, Patna, says that among the infectious diseases his research is restricted to kala azar.

There is infrastructure to tackle such diseases. bsl-4 lab (Biosafety level 4) is one such facility to study and control known and unknown viruses. There are around 28 bsl-4 labs in the world, some even in developing countries such as Brazil and Iraq. But India lacks one. The National Institute of Virology (niv), Pune, was established in 1952 precisely for this purpose. It was earlier called Virus Research Centre. The institute claims to have investigated more than 200 epidemics caused by viruses and identified most of them. It is another matter that niv has failed to predict, prevent or control an epidemic. It launched a project in 1977 to develop a bsl-4 level laboratory. But even after 23 years and Rs 12.87 crore spent, the project is yet to take off.


"As compared to the global infectious disease surveillance system of the who, the indigenous mechanism is poor. The Union ministry of health gets to know about epidemics through media reports instead of the public health workers," says Deodhar. Even then scientists and health officials usually wait for the affected state's government to contact them.

According to Deodhar, surveillance studies are not conducted properly as diagnosis is descriptive rather than analytical. who uses a semi-automated web crawler that scans news available on the Internet to identify epidemics. After verifying these epidemics, it disseminates the information through the global outbreak alert and response network.

who is trying to map epidemic-prone areas through computers. It has also developed an Early Warning and Response Network (ewarn) to detect seven major diseases and ensure rapid response for their control. The us-based Centres for Disease Control (cdc) has also evolved a method to report and identify infectious diseases.

Unfortunately, such collaborations are not taking place in India, thanks to the bureaucratic set-up. "Early detection of a disease is possible only if an organisation like the nicd becomes an autonomous body," feels Datta. This would still not address the issue regarding the control of diseases.

The national health policy, 2001, accepts the shortcomings in the disease surveillance system and hopes to overhaul the system by the year 2005. Unfortunately the focus is once again on known diseases and their control, while new and emerging diseases have not even been mentioned.

Precautions to either contain the spread of the disease or the control of vectors are also not taken. "Every year chicken pox and mumps epidemics occur when schools reopen in the summer. But routine vaccinations are not carried out," says A S Daga, assistant professor of preventive and social medicine, at the Grant Medical College, Mumbai. Deodhar highlights another glaring case. All patients suspected to have plague in Surat were housed together. This led to the spread of the disease to even those who had not contracted it earlier, he says. Even when precautions are taken, they do not have a scientific basis. For example, during the plague outbreak, the Nirman Bhawan and icmr buildings in New Delhi were treated with insecticides, reveals Deodhar. These control measures are empirical and not specific and, therefore, ineffective.


The lack of coordination between the state and Union governments and even between various ministries at the Centre is one of the major reasons for the delay in identification and control of diseases. Consequently, even the decrepit infrastructure that is available lies idle. Lalji Singh, director of Centre for Cellular and Molecular Biology (ccmb), Hyderabad, says that they are capable of identifying any microorganism if it is isolated and sent to them.

But Datta says collaboration is difficult. When ccmb was asked to identify the causal agent of the Siliguri fever, the institute asked for the cost of the chemicals. This could not be given as the sample was already being sent to niv, which is said to have more expertise in the field of virus identification.

According to Banerjee, the surveillance mechanism should be integrated with the public health system so that an outbreak can be reported as soon as it occurs. Deodhar believes that decentralisation of healthcare systems is the solution to the problem. Strict protocols of 'what, how and when' samples should be prepared and collected. "At present, even medical colleges do not have adequate facilities to identify causal organisms," says Daga.

Experts feel that along with investment in equipment, the staff must be supplemented with training people in epidemiology. An important step towards facilitating the identification of pathogens would be to develop a repository of pathogens.

Every mystery fever is an evolutionary success story. From oblivion to pandemic proportions, pathogens make it look remarkably simple. Diffusion of people, mixing of species, poverty, war, squalor, environmental change and susceptible populations, all contribute to their rise. These influences need to be built into a strong disease surveillance system. The best that governments, institutions and communities can do is to keep a few paces ahead of the disease through constant monitoring, simple hygiene and some common sense.

With inputs from Richard Mahapatra in western Orissa, D B Manisha in New Delhi, Jayanta Basu in Siliguri, Vibha Varshney in Mumbai, Prabhanjan Verma in Sarguja and Rae Bareli and Snehasis Das in Meerut