Right from the backyard 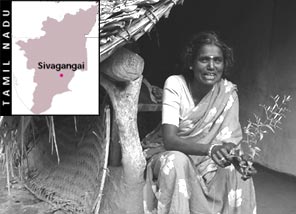 Siriyanangai (Andrographis paniculata) is very bitter. Alagamma hid that well, when she gave a leaf to this correspondent to chew. The bile rose, and the bitterness lingered for an hour. "It shows you have not been bitten by a snake in the last one hour," remarked Alagamma. A person bitten by a snake doesn't feel the bitterness of siriyanangai till the poison in the system has been neutralised.

Snake bites are very common in this region spanning the districts of Sivagangai and Dindigul in southern Tamil Nadu. A few weeks ago, Chinnamma's husband got bitten by the poisonous veriyan snake while grazing cattle. On hearing of it, she plucked a few siriyanangai leaves from the garden, and ground it with white garlic for internal consumption. She also ground periyanangai (Andrographos alata) leaves into a paste, the juice of which was applied on the wound. Within five minutes, her unconscious husband opened his eyes; an hour later, the bitter taste made him grimace, too.

From where did Chinnamma of Vijayapuram village, located in a remote corner of Sivagangai district, acquire this knowledge? Traditionally, the village used to depend on local healers during emergencies, or if time and resources permitted, the primary health centre (phc) or district hospital. Today, all they do is reach into their own backyards. The siriyanangai leaf, for instance, was plucked from Alagamma's herbal patch containing 5-6 varieties of plants with medicinal properties, which more than a lakh households in the southern states of Tamil Nadu, Karnataka and Kerala like to call the kitchen herbal garden (khg).

It really is so. These plants are mostly located in 10 feet by 10 feet plots, where the wastewater from the household collects, along the walls of the house or even inside unused tyres! The most common plants that are grown are sembartha (Hibiscus rosa-sinensis), maradani or henna (Lawsonia inermis), siriyanangai (Andrographis paniculata), periyanangai (Andrographis alata), elambicham (citrus lemon), and adathoda (Adathoda vasica).

The women have a lot of faith in these plants. Says Selvarani of Pullampatti village in Sivagangai district, "I cured a relative who was plagued with the problem of white discharge. I ground the leaves of vallarai (Centella asiatica) with jeera, mixed it in unboiled cow's milk and gave it to her twice a day for a week." Says V Ganesan, a sidha vaidyar (folk healer) and programme coordinator of Gandeepam, a non-governmental organization (ngo) implementing the khg programme in the region, "Low nutrition, lack of hygiene, or early marriage cause this problem and can sometimes lead to infertility. The plants have proven to be very effective".
Organisations like Gandeepam are part of the medicinal plants conservation network (mpcn) of the Foundation for the Revitalization of Local Health Traditions (frlht). About 18 ngos in three southern states have been incorporated as part of its ex situ conservation programme since 1993.

A survey by Kasthuri Chandrasekhar, president of the Dindigul mahakalasam -- a federation of 164 self-help groups (shgs) in Dindigul district of Tamil Nadu -- showed about 30 per cent of shg funds were taken by the women for medical expenses. Studies conducted by Gandeepam reflected this trend. Says V Ramani, founder of Gandeepam, "In a year, a family spends an average of Rs 1,500 on common ailments". Or, as Hariram Murthy senior programme officer, ex situ, frlht, puts it, "A family spends at least Rs 150 per episode of illness". This includes bus fare, medicines and loss of wages for a day.

Also, phcs are difficult for villagers to access. Says Chandra of Pullampatti village, who is also a village resource person (vrp) with Gandeepam, "The phc is more than 7 kms from my village. To get the bus we have to walk more than a km and even then, the buses are very limited. We can't be sure if the doctor and medicines will be available once we get there".

Thus it was decided, by both Gandeepam and the Dindigul mahakalasam, if primary health problems could be addressed within the village -- further, within the household -- it would substantially save money and effort. With wide community participation, seasonal ailments were identified in various blocks and a package of medicinal plant species was arrived at, cures for basic ailments.

Initially, Gandeepam distributed more than 50 plant varieties to each household. This proved unsustainable. Distribution was then restricted to 20 varieties (see box: Medicines in the backyard). Gandeepam relied on shgs in the region to implement this programme. It also appointed vrps to train other villagers in identifying plants, or maintaining khgs. Says Chandra, "I didn't know anything about plants till Gandeepam's training. Now I am able to train others. What is more, I am also paid Rs 50 per day of training". Demonstrations are held in villages to show how the plants cure basic problems. A total of 30 hours of training is given to the women. The households can subsequently refer to the vrp for all help. Today, Gandeepam has 3,750 vrps in 400 villages spread across five districts in Tamil Nadu. The oldest home gardens are more than four years old and the plants have flourished and become an integral part of the lives of the villagers.

Gandeepam charges Rs 40 for the package of 20 plants, but also buys back extra plants from households, for its own sidha hospital at Kilavayal. It buys back siriyanangai at Rs 15-20 per kg, or Rs 5 per kg for hibiscus. This provides households a steady alternative income. Women also charge a nominal amount for medicine they make. But they consider it unethical to charge for an emergency cure such as that for snakebite, unless it is voluntarily offered. Says Murthy, "These savings have also translated into productive investments in cattle and agricultural inputs."

Interestingly, except for maradani, none of the 20 plants were locally grown or available. "All these plants are new to us. But they are so effective," says Andichi of K Pudupatti of Sivagangai district, crushing omavalli (Coleus aromaticus ) leaves to treat fever. "Now we hardly go to the doctor," says her husband, Thenappan, who totally supports the khg idea.
Expectedly, there are sceptics. Says Kalaivani, a doctor attached to the S Pudur phc in Sivagangai district, "I think the efficacy of the medicines, especially for snake poison, is mostly limited to non-poisonous snakes. Some luck is also involved." She admits her phc, which covers 18,500 people over 9 kms, may be inaccessible to some villages, and that the allocation of Rs 30,000 for medicines is not enough. "But we do have anti-snake venom serums in this phc. People should make use of that".

Kalaivani also fears that villagers, in their zeal to self-diagnose, will miss the more serious illnesses. Counters Ganesan, "In our training, we tell people to watch out for symptoms of bigger illnesses. For instance, they can distinguish between the symptoms of tuberculosis, as opposed to a simple cough." They are also cautioned that if symptoms persist beyond seven days, they should visit the sidha hospital or the phc. Says Lakshmi Rahmathullah, Director, Aravind Centre for Women, Children and Community Health, Madurai and a votary of home remedies, "I feel you should give 3 days for the home remedies to have an effect. It shouldn't be kept beyond that".

Can these home remedies be included in the formal system at the village level? Murthy feels it definitely can. Rahmathullah also concurs. She is currently working on two 'model' phcs in Dindigul district, where she is trying to converge the local available resources to improve their efficiency. She says, "I tell phc doctors that they should be accepting home remedies. I think one should give the human body an even chance to fight the illness, before going for treatment". But she believes that rural women may neither have time nor the firewood to prepare the kashayams (medicinal concoctions).

For now, women in these villages are happy with the remedies their khgs provide them. They have the comfort of having at least their primary health in their own hands.