Hope in a heap

Hope in a heap 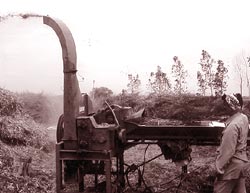 Till last year, Laksman Rao Kaldate of Istal village in Maharashtra's Beed district thought that the agricultural waste generated in his soyabean fields had little economic value. In fact, most farmers of the area had hardly any use for agrowaste. "The common practice was to burn it down," says Kaldate. This year, however, farmers of the region found that the refuse could actually fetch them high returns. The Natural Sugar and Allied Industries (nsai) -- a private sugar factory, which has diversified into ferro alloy manufacturing and is sited about 10 kilometres (km) from Istal at Ranjani -- purchased the agrowaste at the rate of Rs 300 per tonne. And Kaldate was quite delighted to get Rs 1,500 for the 5 tonnes of biomass left over in his soya fields.

But why did nsai require agrowaste from farmers in Beed? It wanted the biomass for use as fuel. Usually sugar factories source their power from sugarcane extract or bagasse. About 30 per cent of sugarcane is bagasse. This goes directly into the factory's boiler, where water runs in through tubes. The heat generated in this device turns the water into steam, which rotates the factories' turbine to produce electricity. A 2,500-tonne sugar factory usually utilises 40 lakh tonnes of sugarcane every year, producing 4 lakh tonnes of sugar (about 10 per cent of the sugarcane is made into sugar) and 1.2 lakh tonnes of bagasse. This waste is enough to fuel a sugar factory's power requirements of 3 mega watts per day. Some even sell bagasse, which fetches about Rs 550-600 per tonne in a crushing season.
Why then did nsai have to buy fuel from farmers such as Kaldate? Firstly, as a result of three successive drought years, sugarcane cultivation in Maharashtra has been declining drastically. In 2001-2002, sugarcane was cultivated on 68,000 hectares (ha) of land in Latur district. The figure has come down to 12,000 ha in 2003-2004. The crushing season, which usually extends to 160 days, had to be curtailed to about 100 days last year. Not only was there a shortage of bagasse, its price also shot up to Rs 800 per tonne in the crushing season and Rs 1,000 per tonne in during the non-crushing season.

Secondly, nsai was confronted with another crisis. Many state governments buy power from sugar factories. Encouraged by this demand, several factories, including nsai, procured extra turbines to generate power from bagasse. But the Maharashtra government has not been able to enter into a power purchase agreement with sugarcane factories in the past eight years. So nsai's investment in the new turbine was under threat. In 2001, the company's chairperson, B B Thombre, decided that nsai must diversify into ferro alloy manufacture. The alloys are used to manufacture various grades of steel and their manufacture is very power-intensive. Things moved well till last year, when the sugarcane shortage had its effect on nsai's alloy manufacturing.

It was at this juncture that Thombre consulted engineers about the possibility of using agrowaste as a substitute for bagasse in his factory. The experts, however, opposed the idea on the premise that since such waste had high ash content, it would damage the boiler tubes. Unfazed, Thombre collected samples of agrowaste and sent them for chemical analysis. The results were much to his satisfaction. It was found that residues from toor (pigeon pea) and cotton straw -- the agrowaste most abundantly generated in the region -- had an ash content of just 3 per cent and 4 per cent, respectively. Bagasse's ash content is about 15 per cent.