Hermit crabs aren't fussy creatures. Faced with a housing crunch, in many parts of the world, they have taken up abode in plastic and junk left by humans. But this is not without peril 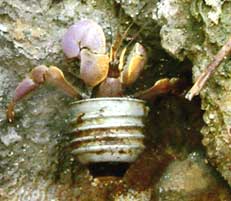 It's tough being a hermit crab these days. Typically, these soft-bellied crustaceans protect themselves by living inside empty snail shells. But hermit crabs, today, face a housing crunch of epic proportions. People overharvest shellfish for food or pick up large numbers of shells on the beach to make door curtains or sundry other home embellishments, leaving very few seashells for hermit crabs.

In many parts of the world, these crabs have adapted. Ironically, they have been helped out of the housing shortage by trash left behind by humans. For instance, at Taiwan's Kenting National Park (knp), hermit crabs have taken to suitably persistent rubbish such as plastic containers, bottlenecks and bottle tops and light bulbs.

Human refuse hardly makes for stylish water fronts. But the hermit crabs can't do without homes. These creatures actually start their life cycles in the ocean, but venture out into land as soon as they attain adulthood, and only return to the deep waters for breeding. Once it crawls ashore, the crab needs protection from a variety of predators.

Usually, shells discarded by snails fit the bill, splendidly. What's more the crab's second home does not hamper its mobility: it just snuggles in on the creature's hind legs and protects its soft body, especially the abdomen -- that holds the delicate digestive glands and reproductive system.

Once a hermit crab adopts a shell, it carries its home, rucksack like, on its back -- until it outgrows the shell. This is no easy feat, considering a properly fitting shell has to be larger than the hermit crab that wears it.

As they grow in size, hermit crabs keep shopping for bigger and ideal shells. They obtain their mobile homes in bizarre swap meets; some actually hand their houses down to smaller crabs when they grow out of these structures. The shape of the shells influences the growth and shape of a hermit crab's abdomen; among the most obvious evolving character of the creature is its asymmetrical abdomen, which is twisted to fit into the shell's coils. The crab's tail also turns hook like.

Once a hermit crab senses danger, it withdraws into its shell, the hook like tail coils around the creature's home to seal it from inside, while the fourth and fifth pair of the crab's legs shrink to enable it to hold on to the insides of the shell.